3 months after repair, BP Highway back to square one 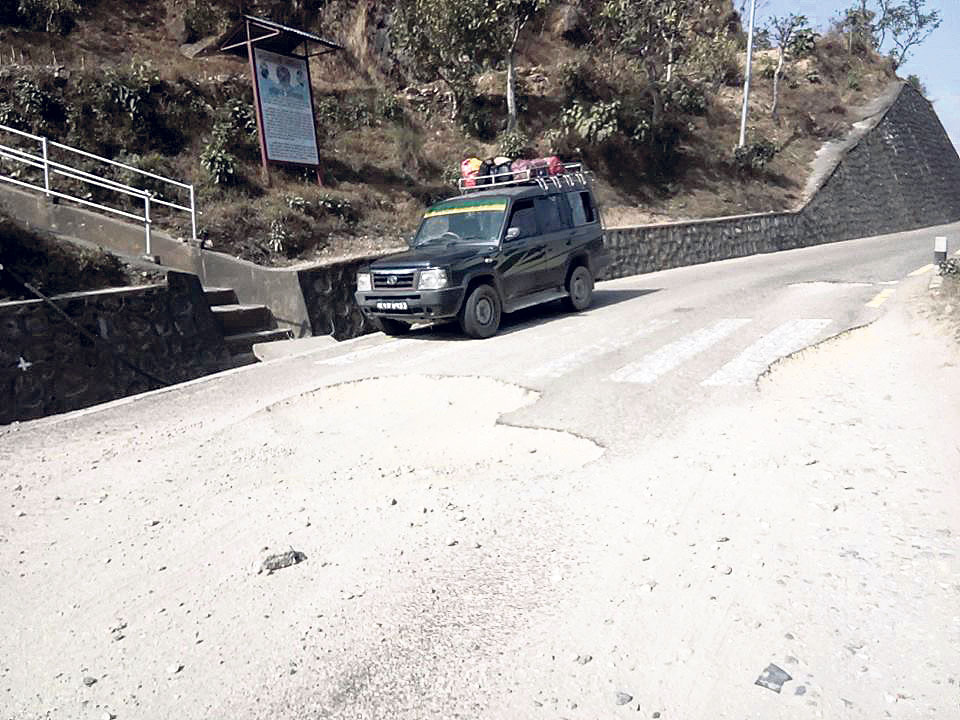 SINDHULI, Jan 31: With the increasing number of vehicles along this vital highway, various places along the Banepa-Bardibas section of BP Highway have developed numerous cracks and bumps, making travelling risky. The shoddy repair work carried out recently along various sections of the highway has made the road even more dangerous.

Lack of timely repair and maintenance has compelled the commuters to travel on a knife's edge.

As the condition of the road is deteriorating every single day, people are worried that it might seriously harm the BP Highway, arguably considered as the finest hillside highway of Asia.

The movement of heavy passenger buses in the daytime and cargo vehicles at night has left several potholes and bumps on the highway. Especially, the road section along Sindhuli-Khurkot has been seriously damaged. Numerous bumps and cracks have not just made the journey a bumpy ride for the passengers but have made them concerned about their safety.

Few years after the Japanese government had handed over this highway to Nepal. Now, various road sections are in dire need of repair and maintenance. Three months ago, several parts of the highway including the areas damaged by the catastrophic earthquake of 2015 were repaired. However, the repaired road sections have started developing cracks and bumps all over again.

"The road along Chiyabari and Pipalbhanjyang needed special maintenance, but the repair work done in a hurry could not last even for three months," said a local Arjun Tiwari.

The highway which was constructed as per the Asian standard is a model road in Nepal. However, the road is losing its charm of late owing to the number of life threatening cracks and bumps.

The use of excavators and dozers for the construction of houses and buildings nearby the road have weakened the road and made it prone to accidents. According to Rameshwar Pandey, assistant sub inspector at the District Traffic Police Office (DTPO), more than 800 vehicles move along the road every day. He says everyday more than 90 large trucks ply the day.

KATHMANDU, Nov 22: The United Nations Regional Center for Peace and Disarmament (UNRCPD) in Asia and the Pacific is set to... Read More...

Corona-infected lawmakers, too, can cast their votes as PM Oli seeks vote of confidence in parliament tomorrow
4 hours ago