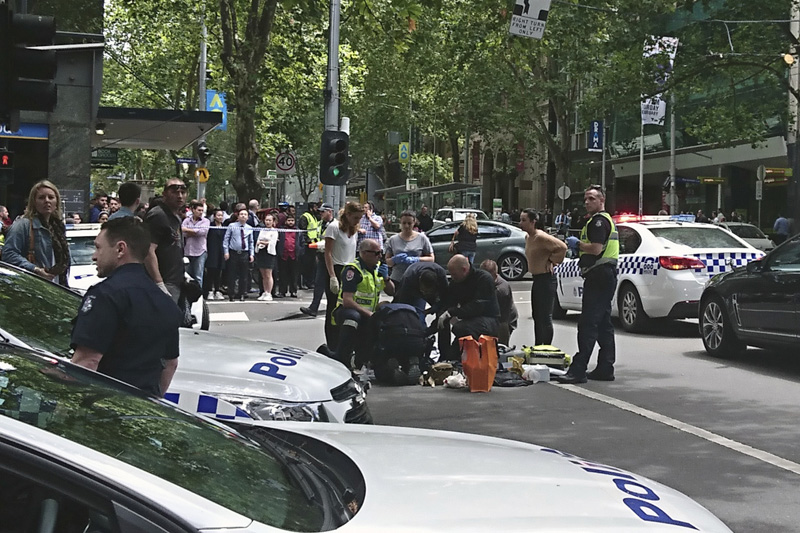 Police and emergency services gather at the scene after a car is believed to have hit pedestrians in Bourke Street Mall in Melbourne, Australia, Friday, Jan. 20, 2017. Photo: AP

SYDNEY, Jan 20: A man deliberately drove into a street crowded with pedestrians in Australia's second-largest city on Friday, killing at least three people and injuring 20 others, police said. Officials said the incident had no links to terrorism.

The chaos began in the early afternoon, after a man was seen driving in erratic circles in the middle of a major intersection in downtown Melbourne. The driver then turned onto the Bourke Street Mall, a pedestrian-only road, deliberately colliding with pedestrians before continuing onto a sidewalk and hitting several other people, Victoria state Police Acting Commander Stuart Bateson said.

The man was arrested at the scene and there was no further threat to the public, Bateson said. Police believe the incident is somehow connected to a stabbing that had occurred in the city earlier in the day.

The incident comes amid global concern over extremists using vehicles to strike crowds, following truck attacks in Berlin and Nice, France last year. Bateson said the Melbourne incident had no links to terrorism.

"At this present stage, we ask the public to avoid the city," Bateson told reporters. "It is going to take us a really long time to process this scene. Our priority at the moment is with the injured, and it must be that we give them our attention."

Paramedics were assessing 20 people at the scene, several of whom had serious injuries, Ambulance Victoria said in a statement.

Video footage shot from a news helicopter overhead showed several heavily armed police officers standing near the area where the incident occurred. Several officers could be seen standing over a man lying on the sidewalk, clad only in his underwear, his hands apparently handcuffed behind his back. Police could also be seen examining a heavily damaged red car at the scene.

A video posted on social media captured the moment the car began driving in circles in the intersection before continuing on toward Bourke Street.

The streets around the incident were shut down.

The Australian Open tennis championship is currently being held in the city. Officials said the event was continuing as normal.

‘Of those killed in road mishap, 40% are pedestrians’

KATHMANDU, Aug 23: It has been found that out of the people losing lives in road accidents, forty percent are... Read More...