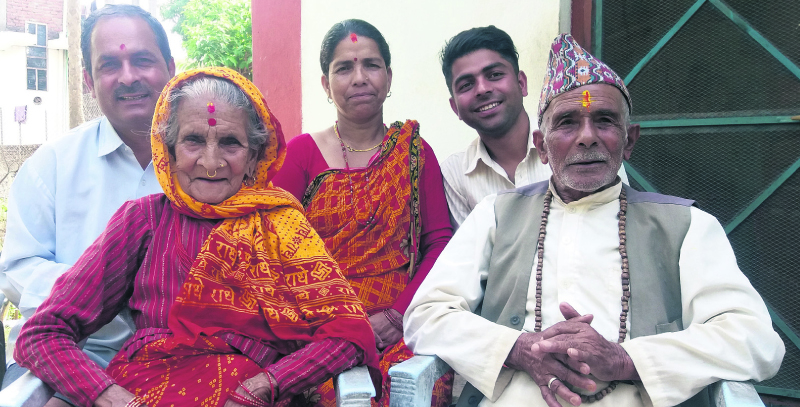 SURKHET, May 12: Eighty four-year-old Tikaram Dhakal of Birendranagar, Surkhet has not forgotten the very first time he cast  his vote. Recalling his youthful days when he voted in the general election of 1959 during the rein of King Mahendra, he said, “My elders told me not to be anxious while voting. I tried to appear calm but my pulse increased when I joined the voting queue.”

But all anxiety vanished the minute he cast his first vote. “I felt happy afterward while   returning home with my wife,” he said.

In a corner of the room, Tikaram’s  24-year-old grandson Prashant was all ears. But unlike his grandfather all those years ago,  Prashant felt no nervousness on the eve of the local elections.
“I can’t wait to vote for someone who will work for our happiness and  for our future,” said Prashant, a  civil engineering student at Mid-Western University. “This is  a chance to elect our own village leader and choose the kind of future we want.”

While the two were engrossed in election talks, Naresh Bikram, Tikaram’s  52-year-old son and Prashant’s father, appeared in the room and joined in. Like his father and his son, Naresh is also excited about the imminent election.

“This election will be great for enabling people of my parents’ generation to live with some dignity. It also bodes well for the new generation,” he said, adding, “The  democracy journey that resumed some six years ago is finally getting into stride.”

Tikaram and his spouse have voted in over a dozen elections. Beginning with their first votes in 1959, they cast their ballots altogether eight times during the Panchayat era. They also voted five times under multiparty democracy and twice since the  federal republic  came into existence.

“Elections   have changed a lot since then. The main difference is in the behavior of candidates,” said Tikaram. “During past elections also, candidates used to visit people door to door.  But the candidates  used to make only modest promises and fulfil those at any cost after winning. These days, the promises are big but vague, with some  impossible to fulfill. They immediately forget the promises once they win,” he elaborated.

Tikaram said  development can  take place in the country only if the locals are clever enough to see beyond election rhetoric and slogans.

The three generations of the Dhakal family are equally excited at the prospect of casting their votes come Sunday.

Availability of animal carcasses attracting vultures to Tanahun
56 minutes ago