3 districts in eastern Nepal isolated due to landslides 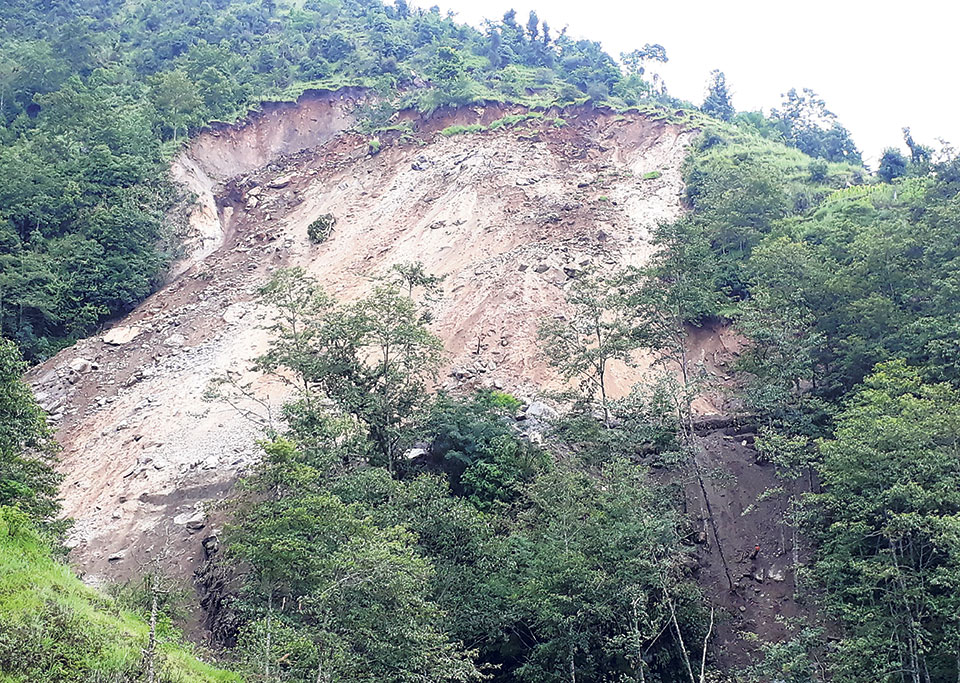 PANCHTHAR, July 21: Some eastern hill districts including Panchthar, Taplejung, and Tehrathum have been disconnected from the national road network since Thursday morning due to a huge landslide along the Mechi Highway at Pangrebhir.

Vehicular movement has come to a halt as the landslide hasn't stopped at Falgunanda Rural Municipality-3 in Panchthar district.

It will take a few more days to open the road even after the landslide stops, said Chief District Officer (CDO) of Panchthar, Murari Wasti.

According to him, they are trying to clear the road using two excavators but the efforts hasn't been fruitful as the landslide is yet to stop.

“A big chunk of land has fallen from above. The machine operators are fearful to work there. Given the situation, we can't predict how long it may take to reopen the road,” said Wasti. “The entire road structure has been buried by the debris.”

This has disconnected Panchthar, Taplejung, Atharai aea of Tehrathum district from the the national road network, which means the region remains cut off from the tarai districts and the capital city. Transport of even essential goods has been stopped. People are compelled to walk for hours through forests. Some can be seen carrying their babies and others loads on their backs. Locals said mainly those falling sick these days are facing serious problems to reach to hospital.

“We are facing a very serious problem. We can't even open the road because it is too risky to go there,” said Shree Bahadur Bista, chairman of Ranke Bazar Management Committee.

People have not been able to bring in daily essential goods to the areas and to export agricultural products such as tomatoes, gingers and other vegetables produced from the three districts.

Minister for Planning and Economic Affairs of Province 1, Indra Bahadur Angbo, said that they are planning to build an alternative route at least for small vehicles so that essential goods and services can be provided to the region.

TAPLEJUNG, May 8: All three departmental teams and Gandaki Province have advanced into the semifinals of the ongoing Third Pathivara... Read More...

Road accident casualties up in Panchthar

PANCHTHAR, March 26: The number of causalities from road accidents in Panchthar district has already reached 15 in the current fiscal... Read More...