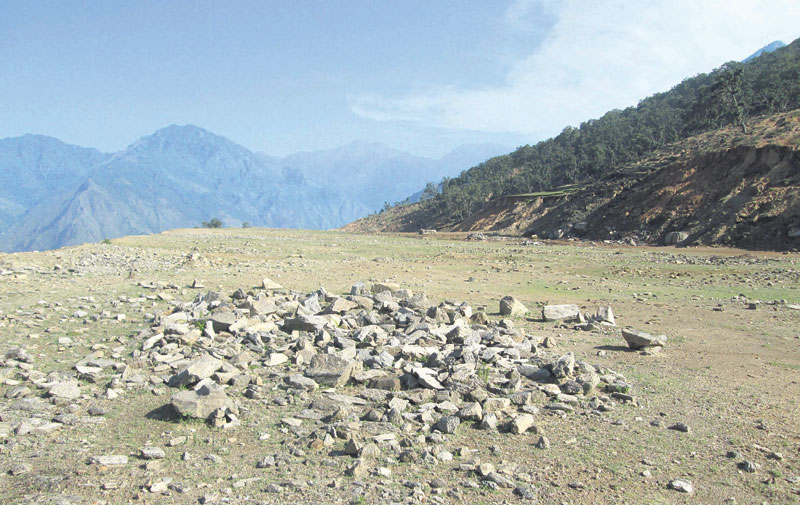 The site of Suntharali Airport in Kotbada of Kalikot district. Locals said the foundation stone for the airport was laid around the middle of 1980s. Although the Civil Aviation Authority of Nepal said the government has already spent Rs 170 million on the

KALIKOT, June 25: The construction of Suntharali Airport in Kalikot has been lingering on since the last 31 years. According to locals, the work has come to a virtual halt due to the negligence of the Civil Aviation Authority of Nepal (CAAN) and the local authorities.

The construction of Suntharali was started with an investment of Rs 100,000 in 1985, which soon came to a halt due to insurgency. Although the construction began immediately after the confilct ended, the work never gathered desired pace.

At present, local user groups led by leaders of major political parties have been given the responsibility to coordinate the tasks related to airport construction.

According to a CAAN official, almost Rs 170 million has been spent in the name of constructing the airport. “It is sad that the construction of the airport started during the Panchayat era has seen no progress even though the country has seen its political system change twice,” locals said.
As many as 35 labors working at the airport site were killed by the Nepalese Army suspecting them as Maoist combatants.

Assistant officer at the Kalikot District office, Padam Lal Lamichhane, said that he will consult the local contractors and other agencies about the progress of the construction. “I will also talk to the officials at Ministry of Tourism and Civil Aviation and do the needful to take the project forward,” he said.

The locals have expressed sadness over how the chief district officer (CDO) and the government authorities lacked any interest on the matter.
Locals have started to lose hope with many of them believing that the airport may never be completed. Bimalramaj Darji, a local at Kumalgaun, Kalikot, said, “The shepherds of Kalikot have started turning the airport into a grazing field.”
Another local, Ganesh Bista, said, “After seeing the airport construction linger on for so many years, I have lost all hopes of flying in an airplane.”

No progress in Pancheshwar project in two decades

MAHENDRANAGAR, March 12: It has already been two decades since Nepal and India agreed to jointly develop Pancheshwar Multipurpose Project on... Read More...

Which services will be allowed in Kathmandu Valley from Tuesday?
22 hours ago

Restriction orders in Kathmandu Valley to be extended by one more week with eased modality
22 hours ago
Prohibitory order: What’s new!
5 hours ago

Integrated policy to be introduced for Raute Community
7 hours ago