3,000 pilgrims reach Gosaikunda in a week 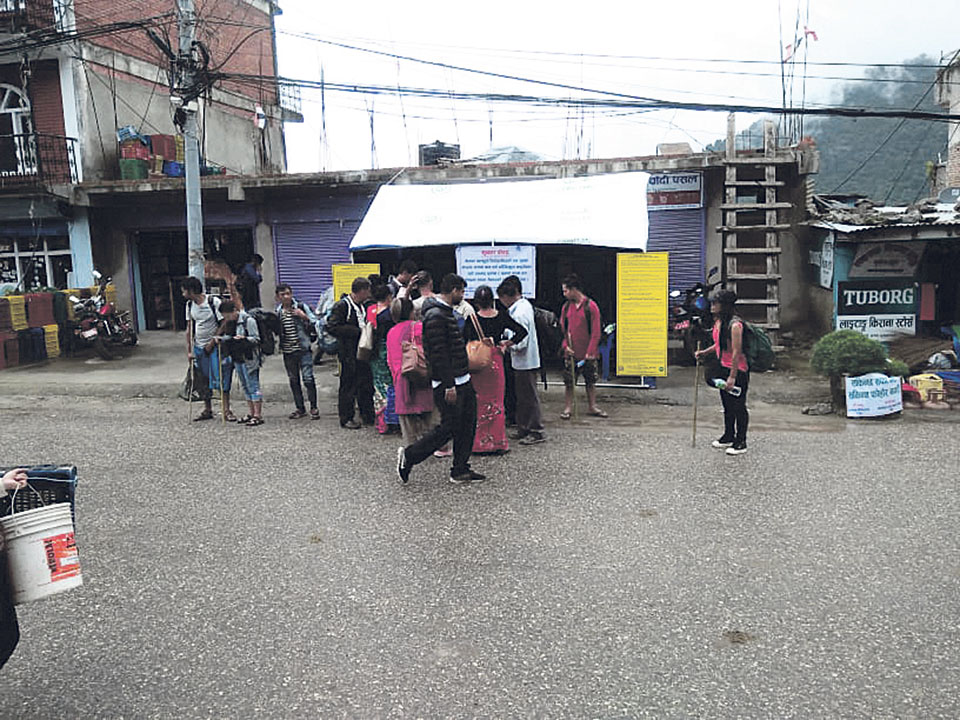 Pilgrims heading toward Gosaikunda Lake take needful information at a stall set up by Rasuwa Chapter of Federation of Nepali Journalists in Dhunche on Saturday. Photo: Himnath Devkota/Republica

RASUWA, Aug 26: The number of pilgrims visiting Gosaikunda, a high-altitude tourist destination as well as a popular Hindu religious site, has been increasing in recent years. Almost 3,000 pilgrims have reached the place in the past week, particularly to observe the Janai Purnima festival. The festival runs for 10 days.

Officials had estimated that 15,000 pilgrims would visit the place this year. However, although the number of visitor is increasing, the estimate seems hard to come true. According to Gosaikunda Area Development Committee, approximately 500 pilgrims are reaching the place per day for the past week. Last year, 7,000 visitors had reached Gosaikunda.

Considering the festival, temporary health camps have been set up in the area by Nepal Army, District Health Office, and other non-governmental organizations including Himalaya Rescue Association, Oxford University Clinic Research Unit, Patan Academy of Health Sciences, and Sakchham Nepal. Camps have been established at Gosaikunda, Lauribinayak, Ganeshgaida, Cholangpati and Chandanbari. Local businesses in Dhunche, district headquarters of Rasuwa, have seen a boom due to the festival. A total 68 temporary tents have been set up to accommodate the pilgrims as the 17 hotels along the Gosaikunda foot trail are not sufficient for all the guest. Local entrepreneurs have assigned 50 horses to carry visitors from Ghattekhola to Gosaikunda.

Around 90 percent of pilgrims who visit Gosaikunda use the foot trail. There are four trails in use: Dhunche-Gosaikunda, Thadepati-Gosaikunda, Yarsa-Gosaikunda, and Sagarkund-Gosaikunda.

Significance of Janai Purnima (with photos and video)

KATHMANDU, August 15: Janai Purnima is one of the greatest festivals celebrated by Hindus across Nepal.  It falls on Shrawan... Read More...

RASUWA, Aug 24: The number of pilgrims visiting Gosaikunda to attend the fair on 26 August on the occasion of... Read More...

Waging War on COVID-19
8 hours ago

Govt extends lockdown by a week, borders to remain sealed
12 hours ago

Monkeys in Pashuptinath scramble for food (with photos)
4 hours ago

Amid rising coronavirus cases, govt extends nationwide lockdown by a week
20 hours ago