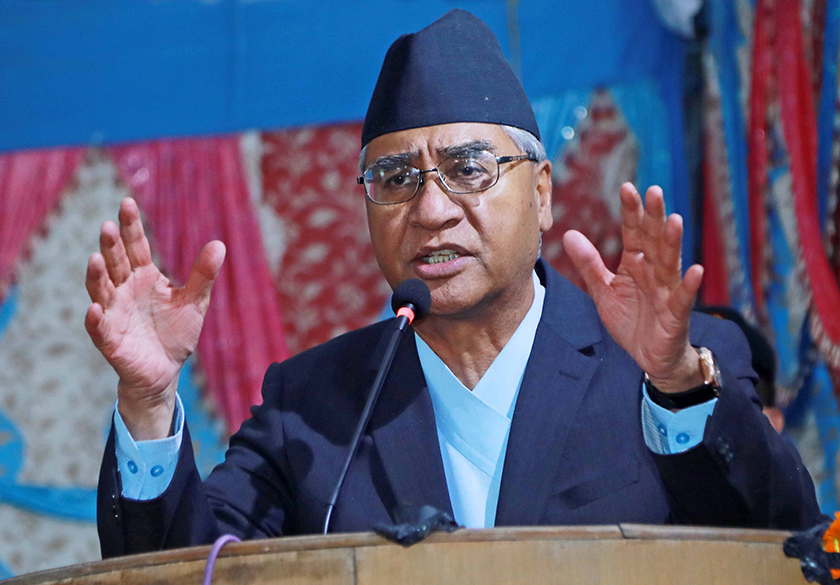 POKHARA, Oct. 28: Senior leaders of ruling Nepali Congress have said that the recently forged alliance of leftist parties was against the democracy, country and Nepali Congress.

Speaking in a program organized by the Nepali Congress Kaski district committee to welcome newcomers to the party on Saturday, NC leaders argued that the alliance was formed to impose communist dictatorship in the country.

He added that the leftist alliance was creating terror among the people. PM Deuba said that the NC only could create a peaceful society as it was fighting for the establishment of democracy for long.

Deuba also claimed that only NC could protect the democracy and people were also realizing the fact these days.

On another note, PM Deuba added that the upcoming federal and provincial elections were the benchmarks between two ideologies of protecting democracy and development while another was for totalitarianism.

Speaking in the program, NC senior leader Ram Chandra Poudel also seconded President Deuba stating that the leftist alliance was against the NC, country and democracy.

He added that the democracy was facing threat these days due to leftist alliance. Leader Poudel argued that the leftist alliance was claiming for changing the basic structure of the constitution after garnering two-thirds majority which was not a good sign for democracy.
NC general secretary Dr Shashanka Koirala said that leftist force would weaken if nation achieves prosperity.

Similarly, NC leader and Deputy Prime Minister and Minister for Education Gopal Man Shrestha urged all democratic forces for the internal unity in the party. He shared that the NC will allocate appropriate responsibility to newcomers in the party.

NC leader and Minister for Law Justice and Parliamentary Affairs Yagya Bahadur Thapa urged all newcomers to work hard for the victory of democratic alliance in the upcoming elections.

On the occasion, Akhanda Party Nepal Chairman Kumar Khadka and former lawmaker Surya Bahadur KC among others joined the NC.
Leaders Khadka and KC shared that they joined the NC after realizing threat to democratic forces in the country. (RSS)

CHITWAN, May 4: At a time when central leaders of Nepali Congress and CPN(Maoist Center) are reportedly talking about forging... Read More...

Since decades, Doti and Dadeldhura have been known as the 'traditional strongholds' of Nepali Congress (NC). In comparison to other... Read More...

KATHMANDU, Oct 27: Nepali Congress (NC) has geared up for the parliamentary and provincial assembly elections by incorporating the forthcoming challenges posed... Read More...