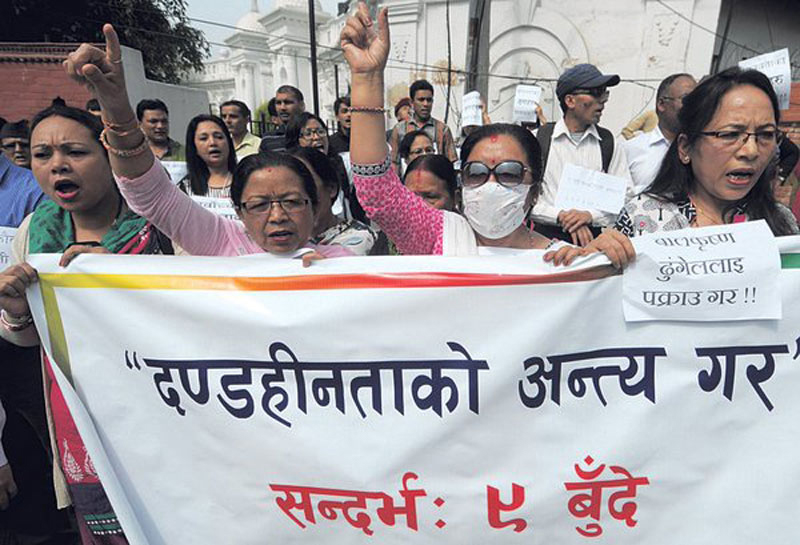 How was Nepal elected to the top United Nations human rights body with such a checkered rights record of its vital state actors?

Australia’s Ambassador to Nepal Glenn White tried his best to persuade CPN (Maoist Center) Chairman Pushpa Kamal Dahal to reconsider his decision to cancel a June 2016 trip to Australia. White was trying to impress on Dahal that neither his government nor its judiciary had any intent of apprehending Dahal on ‘war crimes’, unlike what was being reported in Nepali and Indian media at the time. But Dahal, spooked by the decision of some human rights activists to lodge a formal complaint against ‘a war criminal’ with the New South Wales provincial government, had already made up his mind. He canceled the trip.

Perhaps without a troubling precedent at the back of his mind, Dahal would not have been so perturbed by a rather obscure demand of some foreign rights activists. Three years earlier, in 2013, Nepal Army Colonel Kumar Lama had been arrested in London for ‘torture’ stemming from the decade-long civil war in Nepal. Lama, who had been on a vacation at the time, had been picked up by London police under ‘universal jurisdiction’. According to the International Justice Resource Center, “a national court [of any country] may prosecute individuals for any serious crime against international law—such as crimes against humanity, war crimes, genocide, and torture”.

The likes of Dahal and Lama who had an active role in the Maoist war will continue to face the threat of arrest and prosecution whenever they venture abroad so long as Nepal does not come clean on war-time rights violations. Yet neither the Maoist party nor Nepal Army is serious.

But how was Nepal then elected to the top United Nations human rights body earlier this month—with such a checkered rights record of its important state actors? The Permanent Mission of Nepal to the United Nations attributes Nepal’s election to UN Human Rights Council (HRC) to Nepal’s unique success in “home-grown and nationally-driven peace process that led to the adoption of a human rights-based constitution”. To get into the council, Nepal has, moreover, made various human rights-related commitments.

Our foreign ministry mandarins don’t perchance believe their own pitch to the outside world. Over the past one year, they were also tasked with sharing “Nepal’s experience of ‘unique and home-grown peace process’ with the international community,” says the annual foreign ministry report released in August. But it could not have been lost on them that the peace process they were trumpeting is also incomplete.

Members of the international community, who have repeatedly flagged Nepal’s failure on transitional justice, are no fools. More likely, human rights concerns were of secondary importance to them. This explains the simultaneous election of Qatar and Pakistan, with their dismal rights records, in the HRC. Nepal was able to secure 166 votes, the most in Asia-Pacific, more because of the people skills of our diplomats (and kudos to them for this) and the relative weakness of the opposition it faced, than owing to its not-so-stellar rights record.

That said, Nepal does have a thing or two to teach other war-torn countries: on successful cantonment of warring guerillas and on their later integration into security forces and the society. But what is also true is that without the completion of the transitional justice process, it will be hard to persuade the international community on Nepal’s human rights record.

Some believe the HRC offers Nepal a perfect platform to talk more about its unique peace process. Yet if Nepal does bring up the peace process, the tricky issue of transitional justice is bound to crop up too.

It has been over a decade since the Maoist guns fell silent and with every passing day, truthfully recapturing what happened during those bloody days gets progressively harder.

The recent alliance (and perhaps an eventual merger) between CPN-UML and CPN (Maoist Center) makes the task harder still. There has been a tacit understanding between KP Sharma Oli and Pushpa Kamal Dahal that UML will from now on not raise the issue of war crimes. Notably, Oli and his UML party had been among the most vocal critics of the Maoists and their ‘murderous ways’.

Top leaders of Nepali Congress, some of whom were in decision-making positions during the Maoist war, have never been all that keen on transitional justice, lest they too are implicated in war crimes. Pretty much the same applies to senior army generals.

That would be unfortunate. If nothing else, conflict victims deserve to be at least heard, and compensated where possible. International experience suggests even token prosecutions in grave human rights violations from conflict period—as for instance happened in South Africa—is meaningful and can pave the way for long-term peace. They also go a long way towards assuring the international community. But the chances of even this little happening in Nepal get slimmer by the day, with political parties seem committed to defanging the two transitional justice bodies. As such, with Nepal’s conspicuous presence in the HRC, there could be renewed scrutiny on Nepal’s botched transitional justice.

India and China have economic and military might to protect and promote their interests at the global high table. But for small countries like Nepal soft power is all they have. But how will Nepal convince the outer world that it is a responsible member of the international community if it cannot even do the least to tackle impunity back home?

Our flippant transitional justice process does not square with the image of the tranquil paradise that the country is trying to project to the outside world. Nepal’s image as a peaceful Himalayan nirvana marked by diversity and tolerance was the reason King Birendra’s 1975 proposal to declare Nepal a ‘zone of peace’ gained such widespread international support (with the notable exceptions of India and its Cold War ally USSR). This was why Nepal was also able to easily secure a seat at the UN Security Council in 1969.

If Nepal loses this image, it will have little to show to the international community, and finding a place at the global high table, including the highly competitive Security Council, will be that much harder. Nor will Messrs Dahal and Lama (or any of their countless cadres and collaborators) ever be able to travel safely.

SURKHET, Sept 5: The Birendranagar to Gamgadi stretch of the Karnali Highway is 294 kilometers. In normal conditions, vehicles can travel... Read More...

Bardia had highest number of enforced disappearances, most of them picked up by the security forces. Their whereabouts remain unknown ... Read More...

When you are a kid, birthdays are special because you look forward to receiving gifts from your parents, siblings, and... Read More...

NAC to revise its 10-year business plan
23 minutes ago