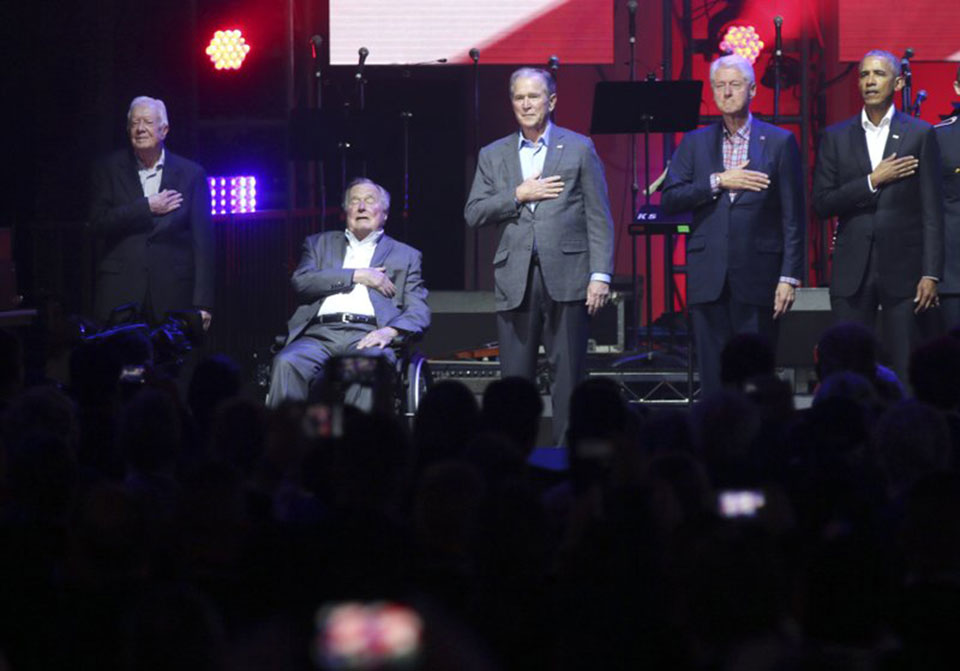 AUSTIN, TEXAS, Oct 22: The Latest on the hurricane relief concert attended by a five living ex-presidents (all times local):

The five living former presidents have attended a concert to benefit victims of hurricanes in Texas, Florida, Puerto Rico and the U.S. Virgin Islands.

Barack Obama, George W. Bush, George H.W Bush, Bill Clinton and Jimmy Carter called on Americans to donate to the appeal that has raised $31 million so far. They avoided politics in their remarks and none of them mentioned President Donald Trump.

President George H.W. Bush did not address the crowd but smiled and waved from the stage. The 93-year-old elder Bush suffers from a form of Parkinson’s disease and appeared in a wheelchair at the event.

Grammy award winner Lady Gaga made a surprise appearance at the concert.

An appeal to help hurricane victims backed by the five living former presidents has raised $31 million since it began on Sept. 7.

Jim McGrath, spokesman for former president George H.W. Bush, confirmed the figure Saturday. The former presidents all attended a concert in College Station, Texas on the campus of Texas A&M University as part of the appeal.

They have joined together to raise money after devastating hurricanes in Texas, Florida, Puerto Rico and the U.S. Virgin Islands.

A hurricane relief concert has begun in Texas featuring the five living former U.S. presidents appearing together for the first time since 2013.

Jimmy Carter, George H.W. Bush, Bill Clinton, George W. Bush and Barack Obama were on stage at the start of the concert in College Station, Texas, home of Texas A&M University, where the elder Bush’s presidential library is located.

They are joining together to raise money to help victims of devastating hurricanes in Texas, Florida, Puerto Rico and the U.S. Virgin Islands.

Trump says in the video that the American people “came together as one” in the wake of a series of devastating hurricanes that hit Texas, Louisiana, Florida, Puerto Rico and the U.S. Virgin Islands in recent weeks.

He says: “This wonderful effort reminds us that we truly are one nation under God, all unified by our values and devotion to one another.”

All five living former U.S. presidents will be attending a concert Saturday night in a Texas college town, raising money for relief efforts from hurricane devastation in Texas, Florida, Puerto Rico and the U.S. Virgin Islands.

Democrats Barack Obama, Bill Clinton and Jimmy Carter and Republicans George H.W. and George W. Bush are putting aside politics for the event. Puerto Rico was devastated by Hurricane Maria, which made landfall after Harvey and Irma had battered Texas and Florida.

Having so much ex-presidential power in one place is unusual. George H.W. Bush spokesman Jim McGrath said all five of Saturday night’s attendees haven’t been together since the opening of the George W. Bush Presidential Library in Dallas in 2013, when Obama was still in office.

KATHMANDU, March 10: The Nepal Oil Corporation (NOC) has increased the price of LPG by Rs 25 per cylinder. ... Read More...

MCC should not be passed under any circumstance: Gajurel
56 minutes ago