29 months on, many quake victims yet to get first installment of grant 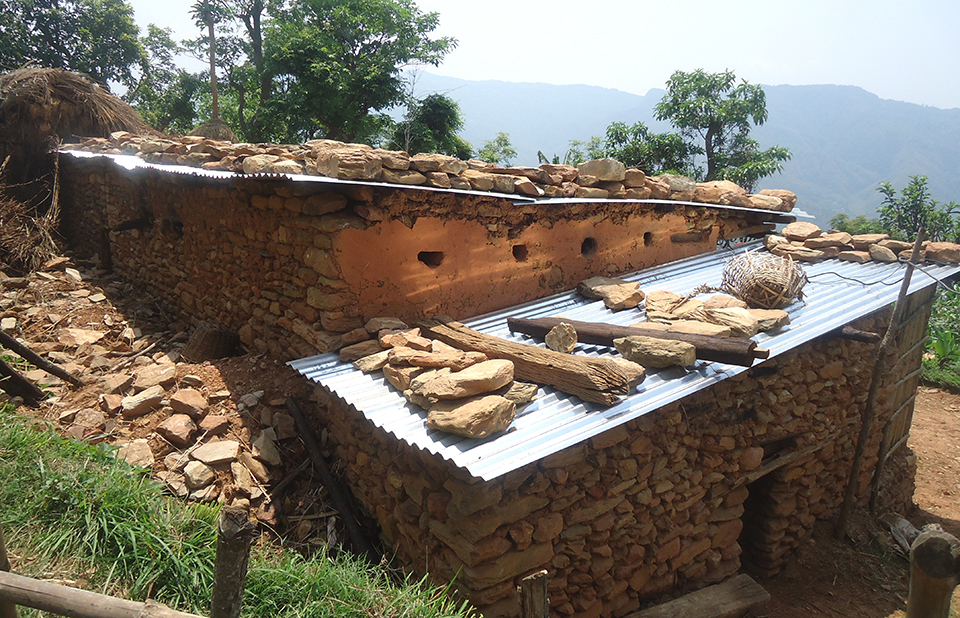 LAMGUNJ, Sept 21: Around 1,500 earthquake-affected families of Madhya Nepal Municipality who expected to receive the first installment of the house grant before the festival of Dashain are not going to get it. They were rendered homeless 29 months ago after the earthquake of April 2015 damaged their house. While quake victims of several other districts have already received the first and second installment of the grant and started building house, these families in Lamgunj remain deprived of it. The District Coordination Committee (DCC) cites lack of documents related to the grant agreement for the delay.

Quake victims from Jita, Suryapal, Ramgha, Bhorletar, Karapu, Ishaneshowar, Tandrangtaksar and Banjre villages of the municipality are yet to get the house grant. They expected that the government would expedite the process and hand over, at least, the first installment before this Dashain. However, the administration has now ruled out the possibility.

Shiva Regmi, program officer at the DCC, said that his office is yet to receive the documents related to the agreement from concerned authorities and argued that the funds could not be availed without them.

“We have not received the required papers and without them, it’s not possible to release the funds. On our part, we are doing whatever we can do. To expedite the process once we get the papers we have already opened bank accounts for the victims. As soon as we receive the papers we will deposit the installments,” Regmi said while sharing that quake victims of some villages of the municipality have been not able to receive the grant.

Regmi stated that the secretaries of all the wards of the municipality, who are yet to receive the grant, have been contacted several times by the DCC for the providing the necessary documents. “But it seems that they have not taken the repeated calls seriously. And because of it the quake victims won’t receive the grant, as they expected.”

This has greatly disappointed the victims who now doubt if they will ever receive the grant. Stating that quake victims like them in other districts have even received second installment of the grant, they questioned government’s efficiency.

“It makes us feel that we might not be getting any grant. Or else, why are we were left out for long?” asks Tirtha Bahadur Nepali of Suryapal village. “The prolonged wait has made us feel less assured of getting anything from the government,” he added.

The victims lament that their grievances have not been heard by anyone. And the hope of getting the grant has deprived them from building house on their own. They fear if they do so, they might be considered ineligible for the grant. But the nearly 30 months wait has agitated most of them. “We are not able to take any decision. We are in dilemma. What to do, what not to do and all these have made our life even more uncertain.”

Nepali said that he has approached ward office several times in this regard and had even talked to the secretary. But each of these times, he said, he was never given a clear answer.

Another earthquake victim, Man Bahadur Gotame lamented of the same thing. He also visited the ward office several times to talk about house grant but he too returned without a substantial answer. “I don’t know why we are not getting the grant. Why the grant process has been so slow for us,” he said.

Both Gotame and Nepali said that they were quite hopeful of getting at least the first installment of the grant before this year’s Dashain. It is what was told to all the victims and which they had believed.

“We were told that the grant would be provided to us before Dashain. We were also very hopeful. But even though the festival is on our doorstep, we don’t see any sign of getting anything,” said Gotame.

The government provides Rs 50,000 as the first installment and Rs 100,000 as the second installment while the total grant is set at Rs 300,000. Apart from this, quake victims get free technical service which includes consultation from engineers and overseers deployed by the government at the reconstruction sites.

According to Upendra Raj Poudel, acting officer at the municipality, the victims would not have to wait much now. He stated that the papers were arriving at his office and would be soon forwarded to the concerned authorities.

“The documents are finally coming our way. As soon as we get all of them we will submit them to the district coordination committee,” he said while stating the process would still take time and that quake victims won’t receive the grant before Dashain.

KATHMANDU, Aug 12: Chief Commissioner of the Commission for the Investigation of Abuse of Authority (CIAA) Nabin Ghimire has tested positive... Read More...

KATHMANDU, Aug 11: The Kathmandu Valley has witnessed the highest single day spike of 134 new cases of coronavirus on... Read More...

183 health workers in Nepal infected with COVID-19 so far

KATHMANDU, Aug 11: As many as 183 frontline health workers have contracted the novel coronavirus disease (COVID-19) in Nepal as... Read More...