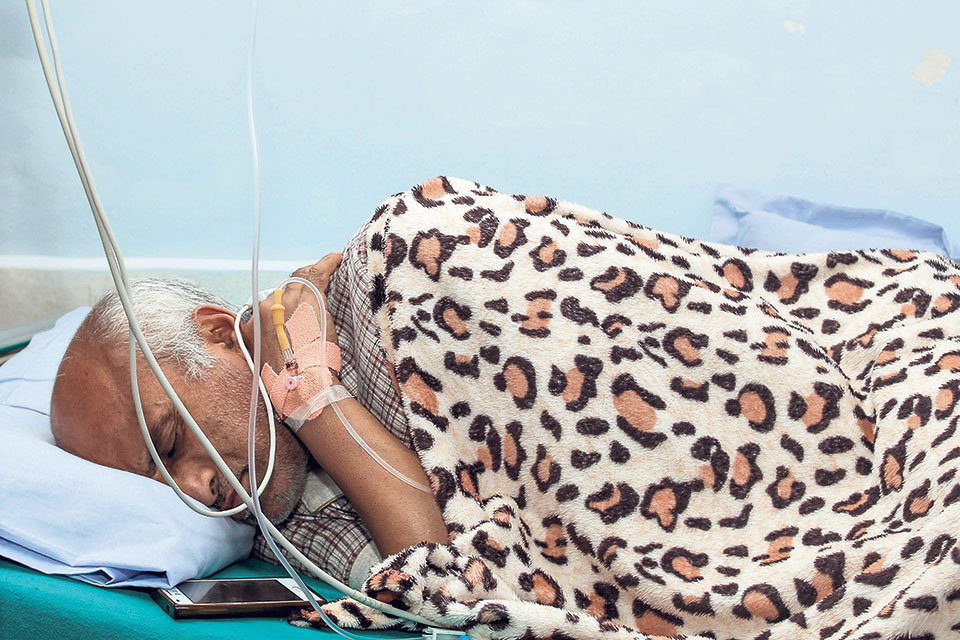 Dr Govinda KC on the eighth day of his fast-unto-death at the TU Teaching Hospital Thursday. He named a 51-member team to negotiate his demands with the government Thursday. He wants crucial reforms in medical education.

KATHMANDU, Oct 13: Following the formation of a talks team by the government to discuss the demands of Dr Govinda KC, the doctor’s side has also announced a 51-member talks team.

Dr KC is currently on his 13th fast-unto-death at TU Teaching Hospital, Kathmandu, demanding crucial reforms in medical education. On Thursday, the eighth day of his hunger strike, his condition was reported as serious.

Issuing a press release after the formation of the team, Dr KC called on all Nepalis to get united against the irregularities in the medical education sector.

Dr KC has further said that the 51-member talks team will be expanded so as to include representatives from all districts of the country.

Those wishing to join Dr KC’s movement for medical reforms can call 1862371093 or contact through Facebook, according to a statement issued by Dr KC’s aides.

Meanwhile, the medical education bill, which has remained a key demand of Dr KC for bringing reforms to medical education, could not be tabled in parliament Thursday after objection from lawmakers of the CPN-UML and CPN (Maoist Center).

UML lawmaker Rajendra Pandey objected to the bill at the meeting convened by Speaker Onsari Gharti on Thursday morning, according to Maoist lawmaker Ram Narayan Bidari.

Then, the meeting concluded without any decision after Maoist Center Chief Whip Rekha Sharma proposed that the issue be discussed on Friday. As the term of the parliament is set to expire Friday, the passage of the bill is highly unlikely, according to several lawmakers.

Coronavirus infection confirmed in 38 people on Wednesday
8 minutes ago

US Acting Assistant Secretary Trudeau in Kathmandu
29 minutes ago