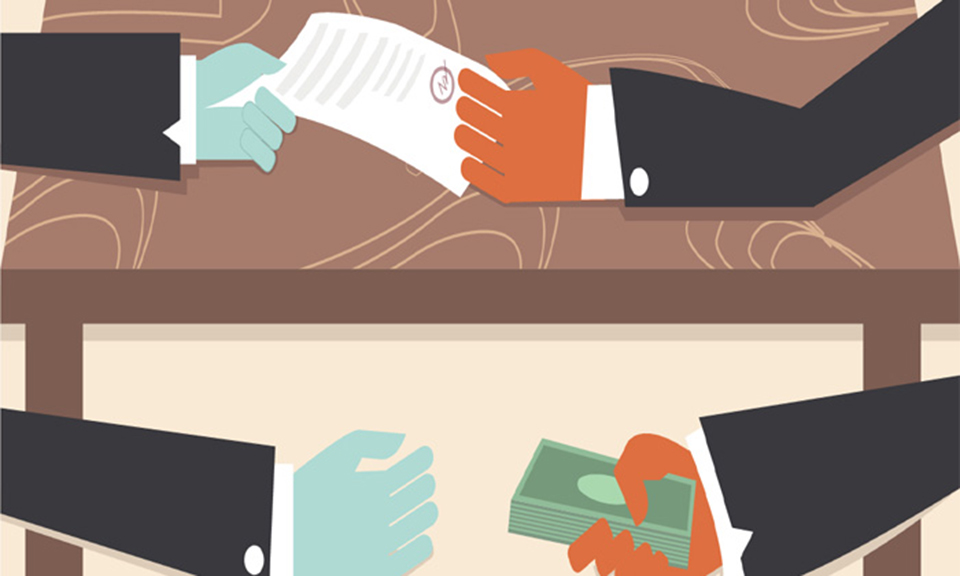 What defines corruption here? Is it media coverage or the actions of the CIAA or court verdicts or the size of julus in favor of Dr Govinda KC at Maitighar?

There is a famous line in corruption literature: You can take away corruption from politics but you cannot take away politics from corruption. The first part says there is a remedy for every type of political corruption; they can be prevented and cured. The second part speaks about politicization of corruption (and also anti-corruption), and there is no remedy for this.

With high-profile corruption-related political incidents like the impeachments of Brazilian President Dilma Rousseff in August 2016 and South Korean President Park Geun-hye in December 2016; the ouster of Pakistan’s Prime Minister Nawaz Sharif through court order related to corruption in July 2017; and  the recent (August 2017) conviction of former Prime Minister of Thailand Yingluck Shinawatra over the charges related to dereliction of duty on rice subsidy scheme, they have all helped renew people’s interest in corruption.

Recently (September 23), Harvard Law School organized a conference on the rise and fall of populist plutocrats, namely, Silvio Berlusconi (Italy), Thaksin Shinawatra (Thailand), Joseph Estrada (Philippines), Alberto Fujimori (Peru) and Jacob Zuma (South Africa)—while seeking to understand the rise of Donald Trump. There is a commonality among populist plutocrats: they all rise to power promising good governance and fight against corruption but, in the end, they are only concerned about enriching themselves, leaving behind a legacy of a thoroughly corrupt government.

There is also a profusion of books, articles, news, views and analysis on corruption. However, many of these views and reviews are biased or laced with emotions rather than products of systematic thinking and analysis based on facts and figures. The current situation is close to the royal regression (2004-06). We may no longer have an extra-constitutional anti-graft body like RCCC, but the situation on corruption has changed little, characterized as it still is by total confusion, lack of direction, bias and chaos.
We have come to a stage where it is difficult to differentiate corruption from an honest act. What defines corruption here? Is it media coverage or the actions by the CIAA or a court verdict or the size of the julus in favor of Dr Govinda KC at Maitighar? By the way, Dr KC is a public servant drawing taxpayer money. And where on earth does a public servant get the privilege to organize anti-government fast-onto-death hunger strikes and rallies, that too, in the name of upholding honesty, integrity and transparency?

Similar to a saying “beauty lies in the eyes of the beholder”, we are now into a subjective world where interpretation of corruption depends on the interpreter. There is simply no agreed standard to judge a conduct or a decision as a corrupt or aboveboard act. Those of us who think of the court verdict on Sudan Scandal as bold, and idolize a particular judge, better read and re-read the case thoroughly. Recently, in the US, the Health Secretary tendered his resignation simply because he used expensive private airline for official travel. Here we do not care even if the President employs army helicopters for personal use, misinforming public she is on a mission to monitor road construction, accompanied by her daughter and son-in-law.

Over the past sixty years, the actors and the modus operandi may have changed but the basic character of corruption has remained the same. We must be thankful to the Ranas, at least, for leaving behind palatial buildings to house government offices. In this context, one may ask: What did the Shahs leave behind? Nothing.

In a predatory jungle world, there is a feeding hierarchy amongst animals: first, lions will have their kill, they will take best piece of meat, and the leftovers will go, in turn, to the hyenas, the vultures, the flies, the maggots and, finally, to smaller birds and ants. Similar to this feeding hierarchy, squeeze the timeframe of past 100 years, and we find Ranas getting the best piece of meat, Shahs and Panchas sucking the blood, multiparty-wallahs crunching the bones and, finally, the ever-hungry Maoists feeding on the remains of the prey called Mother Nepal.

Since ancient days, looting and plundering of state resources have gone unabated. King Prithivi Narayan’s saying that “the bribe takers and givers are the enemies of the state” only vouchsafes for the prevalence of corruption, not the commitment and determination of the state to fight corruption. Over time, the resources used for rent-seeking may have evolved from the grabbing of land to massive deforestation to the supply of Gurkhas to foreign armies to the public sector procurement, contracting and import licensing. But the basic culture of rent-seeking has remained intact. The economy still survives on export of people and import of luxury items (gold, cars).

What about anticorruption agenda? The way CIAA Chief Commissioner Lokman Singh Karki was first hired and later fired (court disqualification) and the way other members of the CIAA were appointed along partisan lines; and the way the powers and functions of the CIAA were clipped by the new constitution—these actions speak a lot about true intent of our political leaders. It is a national shame to ratify UN Convention against Corruption and do nothing. Corruption is simply a deviant behavior. When there is a yawning gap between what you say (espouse) and what you do (practice), that is also corruption.

Perhaps few other countries have as many anti-corruption agencies as does Nepal. We have agencies to prevent corruption, to investigate and prosecute corruption cases, and to adjudicate on corruption crimes. We have more agencies to look after procurement corruption, money-laundering and revenue leakage. There are then agencies within the parliament and those that work with donor funds. To add insult to the injury, probably, there is no country with such a lenient, relaxed system for corruption convicts.

Going by the punitive measures mentioned in the law, with a maximum of two-year imprisonment for illicit enrichment cases, together with 20 percent rebate bonus for accepting court verdict, literally, Nepal is a safe haven for corrupt politicians. Recent debate on whether a corruption convict should be allowed to contest election is frivolous. It is like cleaning downstream of the river when the source itself is polluted.

When there is politicization of corruption or corruption is used as a tool to promote partisan interests, corruption ceases to become a problem; instead, it takes the form of a remedy or a solution to any problem. In such a scenario, antidotes to corruption simply fail to work. What then? Is the situation in Nepal hopeless? We may probably have to wait until the ongoing political dust settles. Given the way the political leaders are making mockery of democracy in the name of electoral alliance, party unifications and building democratic fronts, we may probably have to wait a long time for effective corruption control.

The author is a freelance management consultant.

KATHMANDU, Dec 17: A sitting minister gets caught in camera asking for bribe from his prospective clients to do a... Read More...