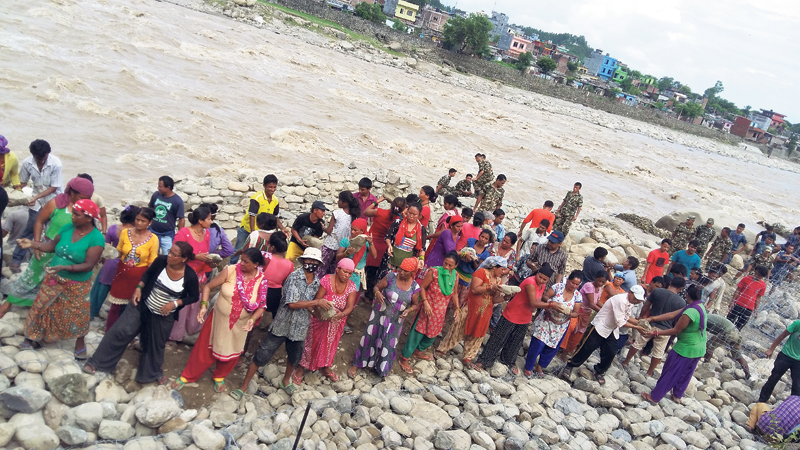 Locals of Top Majuwa in Rupandehi district aided by police and army personnel working to construct embankment along the Tinaun River to prevent floodwaters from entering their village Wednesday.(Sher Bahadur KC/Republica)

KATHMANDU, July 27: The National Human Rights Commission (NHRC) has asked the government to immediately vacate the settlements at risk of landslides and floods in various parts of the country.

It has also asked the government to give top priority to pregnant women, children and elderly citizens while carrying out rescue work in the floods and landslides affected areas.
Issuing a press statement Wednesday, the NHRC has stated that its serious attention has been drawn toward the huge loss of life and property in various parts of the country by landslides and floods.

As many as 57 people have died and around two dozen others are missing in landslides and floods in various 16 districts over the last two days, accroding to Republica correspondents.

Dolakha, Kathmandu, Jhapa, Dang and Rupandehi districts are hit by landslides and flood.

Likewise, the commission has also asked the government to be highly sensitive and take all the necessary efforts to minimize further loss to life and property throughout the monsoon.

Following criticism from various quarters, the central disaster relief committee under the Ministry of Home Affairs held a meeting on Wednesday and directed the security agencies and the district administration offices in all districts to do all to make search, rescue and relief operations effective in the areas hit by landslides and floods.

The committee also asked the Office of Prime Minister and Council of Ministers to transfer Rs 750 million from the Prime Minister Disaster Relief Fund to the Disaster Relief Fund of the committee for rescue, relief and rehabilitation of the landslide and flood victims. According to the committee, hundreds of locals in the 16 districts living in areas at risk of landslides and floods have been shifted to safer areas and efforts were being made to ensure them relief and shelter.

“The Rs 750 million will be used for setting up temporary shelters for victims evacuated from risky areas and for providing them food and other relief. Security agencies are working for search and rescue while the district authorities are making arrangements for shelter and relief for the victims,” Spokesperson at the Ministry of Home Affairs Yadav Koirala said.

He said that the committee has also asked the Ministry of Health and Population to take necessary measures in the landslides and flood affected areas to prevent possible outbreak of diseases. “All the concerned district authorities are on high alert and they have been asked to make utmost use of government resources for safety of the victims,” he added.

NHRC asks govt to be serious over Dr KC's health

KATHMANU, July 15: The National Human Rights Commission (NHRC) has urged the government to be serious over the health of... Read More...

Exclusive: Up to 1 million COVID vaccines expired in Nigeria last month
56 minutes ago