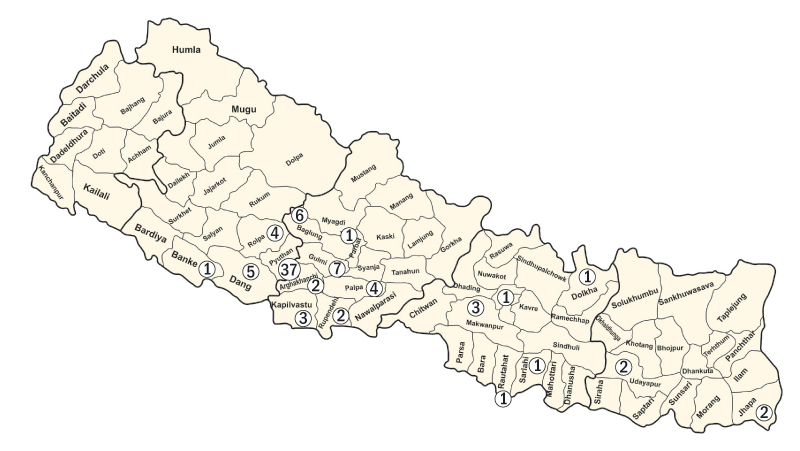 KATHMANDU, JULY 27: With an additional 36 deaths confirmed on Wednesday, the death toll from landslides and flooding across the country has risen to 83 while hundreds of homes have been swept away by flood or engulfed by mud and rock slides.

Floods and landslides have left 31 injured and as many as 15 are missing. A total of 76 houses have been completely destroyed and two others suffered partial damage, according to a press release from the Ministry of Home Affairs (MoHA).

The death toll of 37 in the last two days is the highest ever on record from natural disasters in Pyuthan.

"We were actually not at any risk. The newly-constructed rural road is the reason for these landslides," said Shivaraj Subedi, a local. "The soil was greatly loosened up after the use of an excavator to construct the road. Loose soil coupled with heavy rainfall led to this big disaster."

Teams from Pyuthan District Administration Office (DAO) and the District Disaster Relief Committee (DDRC) have reached the affected villages with relief materials including clothes and tarpaulins. Chief District Officer Janak Raj Pant said the decision to distribute relief materials was taken at a meeting held at district headquarters on Wednesday.  However, locals complained that the rescue teams and relief did not reach them on time.

Dang
The bodies of five people, three men and two women, were recovered from the banks of the Rapti river in Dang,  Wednesday morning.

According to Prakash Raj Sharma, Deputy Superintendent of Police at the District Police Office, the identities of four of the deceased are yet to be ascertained while the fifth one has been identified as Thagi Ram Chaudhary of Gangaparaspur-9, Takiyapur.

The bodies might have been washed downstream from Pyuthan district, Sharma said. Locals had informed police Wednesday morning after they saw the bodies on the banks of the Rapti.

More than a dozen houses have been destroyed and some 100 others were inundated by flooding in the Rapti on Tuesday night. The flood has caused massive loss of propriety. Police are collecting figures on the loss and damage, according to the DPO.

Kapilvastu
At least three people have died while three others are missing in Kapilvastu district due to flooding in the Banganga river. The body of Tirath Pasi, 55, of Somdiha-6, who had gone missing from Tuesday, was found on the banks of the river on Wednesday.

Rabina Chaudhary, 12, of Banganga and Kalpana Karki, 16, of Bhrikuti Municipality, Bhudhdhi drown in the river on Tuesday.

Madhe Kujada, 45, of Somdiha-8, Ahamad Husen, 52, of Niglihawa-2 and Shiva Gulama Kalawar, 22, of Kajaraha-9 are still missing and police have been deployed to search for bodies, according to Deputy Superintendent of Police Pralhad Adhikari.

Parbat
A girl died and eight others were injured after landslide hit a cotton mill at Majhphant-3 in Parbat district, Wednesday.

Local resident Ankita Tamang, 12, died on the way to Pokhara for treatment, according to District Police Office, Parbat.

The injured and deceased had been sleeping inside the building of Dhaulagiri Cotton Industry when disaster struck, said locals. The landslide caused a loss of Rs 1.5 million to the mill, according to Inspector Dhruba Thapa.

DSP Ram Prashad Gharti Magar informed that the bodies were recovered about 150 meters from the landslide site.

Rautahat
Flooding in the Lalakbakaiya River washed away a little girl in Rautahat district. According to locals, seven-year-old Ishwarwati Kumar Das of Bhasedawa-7 had gone swimming with two of her friends on Wednesday evening despite the high water level in the river.

Locals managed to rescue the others, but Ishwarwati could not be saved, according to DSP Nabin Krishna Bhandari, spokesperson at DPO, Rautahat.

Floods and landslides triggered by incessant rainfall have left seven people dead in Gulmi, six dead in Baglung, four in Palpa, three in Makawanpur, two in Udaypur, two in Arghakhanchi, two in Jhapa, two in Rupandehi and one each  in Kathmandu, Dolakha and Sarlahi over the last three days, according to MoHA.

PYUTHAN, July 27: The death toll from landslides that hit the district has climbed 24 after seven more persons died... Read More...