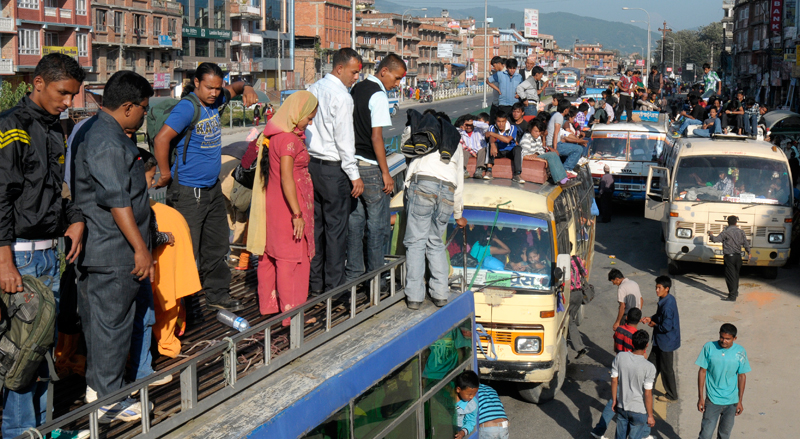 KATHMANDU, Sept 26: So far 190 thousand people have left their homes for the Dashain celebrations.

According to the Metropolitan Traffic Police Division spokesperson Umesh Ranjit, this data includes the number of passengers leaving the Kathmandu Valley since September 5. The number of people entering the Valley is said to be minimal.

As the Dashain celebrations have already begun, the traffic police have taken special measures to cope with adversities in traffic management. People from outside the Valley, those residing here for various purposes like for jobs, study, business and those Nepali en route to home from abroad are seen exiting from Kathmandu valley via Thankot, Sanga, Dakshinkali and Balaju points.

Passengers mainly outbound via Thankot point are stuck in traffic jam for hours due to structures pulled down in course of the road widening drive. Bearing in mind a large exodus of the people during the festival, the traffic police have set up civic help desks at 12 locations for the convenience of passengers.

Additional human resources have been mobilized at New Road, Bus Park and Kalanki areas which see more traffic pressure. Likewise, the anti-drink-driving campaign has been intensified in view of the Dashain festival and the campaign which was mainly in force in the evening/night shift in regular time will go throughout the day during the festivals.

Meantime, the traffic police took action against 30 people for black marketeering in the sale of tickets of public vehicles and overcharging passengers. They faced music for unethical business and were made to return the extra amount they took while selling tickets to respective passengers, the Division said. RSS

Govt urges people to carry out only routine rituals at temples, avoid setting up swings this Dashain

KATHMANDU, Oct 8: In a bid to curb further spread of novel coronavirus disease (COVID-19), the government has urged all... Read More...

Temperature of Kathmandu valley remains stable for some days

MCC will be passed without any amendments: PM Deuba
23 hours ago

Permission granted to cut around 7,000 trees to widen Mugling-Pokhara road
21 hours ago

Woman arrested with seven kg of hashish
29 minutes ago