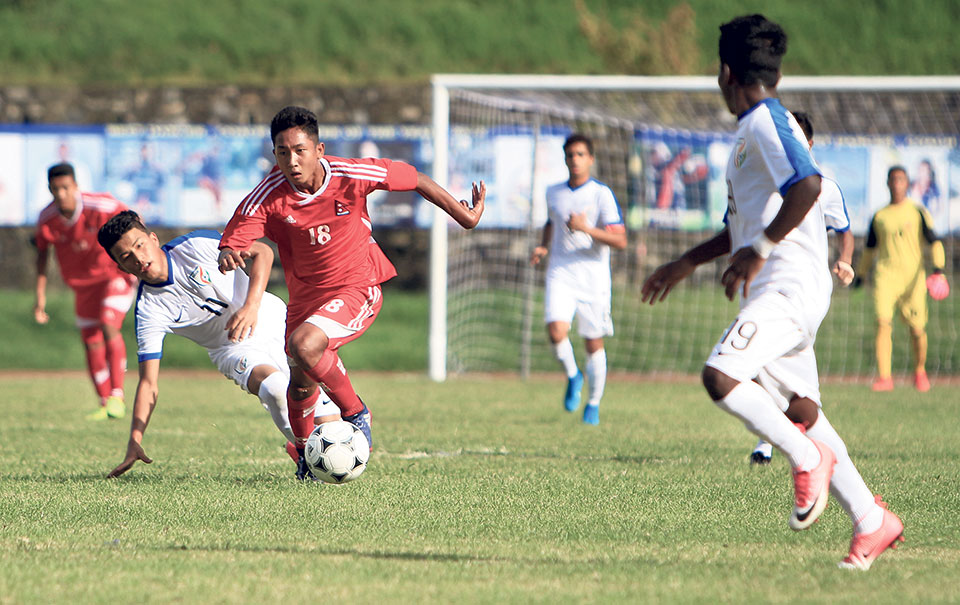 Nepal’s Akash Budha Magar moves with the ball against India in AFC U-16 Championship 2018 Qualifiers, at Halchowk Stadium, on Friday.

KATHMANDU, Sept 24: After failing to win none of the first two of the total three matches, Nepal’s chances of qualifying to the final round of AFC U-16 Championship as Group D winner is already over.

However there is a slim chance of Nepal securing its berth in the Championship as best runner-up as five such nations join the ten group winners in the age group continental tournament to be held in Malaysia next year.

But the qualification journey is not going to be an easy, as Nepal’s win over Palestine at Halchowk Stadium, Kathmandu, on Sunday will not guarantee the runner-up spot. To strengthen Nepal’s chance, Iraq should defeat India and on the other hand the home team also should score at least four goals against Palestine.

After recording victories in first two matches against Nepal (1-0) and Palestine (4-0), defending champion Iran has six points and a draw against India will take it to the final round of the Championship.

However Indian team which had overcame Palestine 3-0 before settling for 2-2 draw against Nepal, needs victory against Iraq to secure its berth in Championship.

As the qualification hope is hanging in a balance, Nepal’s Head Coach Sunil Kumar Shrestha says team’s minimum target will be to wrap up the competition with a win.

The qualification equation will be clear before Nepal plays its last match against Palestine as the first match is between the leader Iraq and current runner-up India.

“If Iraq defeats India, our chance to get second spot will remain alive but we will have to produce big margin win over Palestine,” said Head Coach Shrestha.

However he knows instructing players to score more goals may put them under pressure. “We know we have to score at least 4 goals but we can’t put players under pressure, so we will try to play our normal game,” added Shrestha.

“Securing second spot is obviously our main target, but if that is not possible our strategy will be to conclude the qualifiers with a win.”

Nepali players displayed improved performance in second match (against India) creating several goal scoring opportunities and scoring stunning goals as well. Shrestha hopes that his players will continue the form shown against Palestine. He also believed that players are improving in all departments.

“In the first match we had problem in finishing side but it was improved significantly in the second match. Hopefully we will play even better football in our last clash,” Shrestha expressed his hope.
Nepali young players failed to cope up with opponent’s pressure in the vital period of the match.  In its first clash against Iraq, the Nepal had conceded goal in 69th minute.

In the second match, the host team took lead in 69th minute but failed to save it and conceded two goals in the gap of two minutes in last 10 minutes.  Shrestha says he has a task to help players stay confident.

Nepal was defensive against Iraq but changed its tactics against India pushing its midfielders to attack to help forwards. Home team is expected to play even more attacking match against Palestine.

“We are not taking Palestine lightly but we want to gather full three points playing attacking football,” said Shrestha. He is likely to play same first eleven on Sunday that he chose against India.

Defender Sanjib Aryal who was substituted on Friday due to injury, is available for Palestine match. Although Shrestha will use three strikers, Nepali Head Coach will opt 4-4-2 formation with two strikers Brijesh Chaudhary and Ranjan Pun upfront and other striker Akash Budha Magar as an attacking midfielder. Likewise, Darshan Gurung and Karlosh Bakhariya are expected to be given wide role. Shrestha is unlikely to make any change in defense and goalkeeping.

“Our boys are finding it really hard to cope with the local conditions but we hope to come up with a better performance against Nepal. We will show our true colors when we face home team.” said Jalayta.