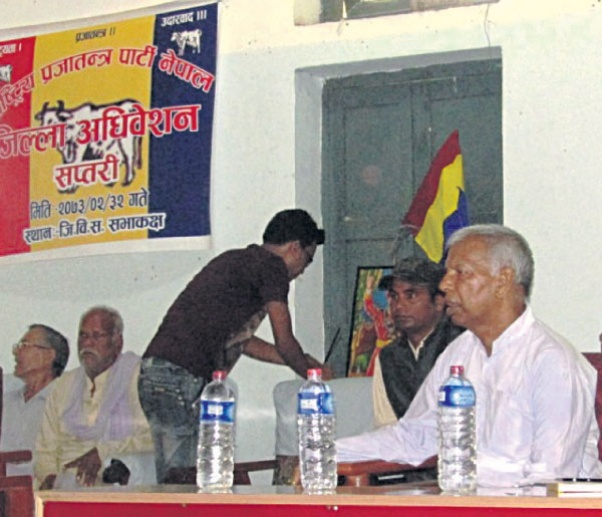 RAJBIRAJ, June 16: As discussions on budget allocation for special infrastructure development projects in Saptari-6 were being held at the office of Local Development Officer on April 28, three lawmakers barged into the meeting venue leading to a scuffle.

According to eyewitnesses, Deputy Speaker of Parliament Ganga Prasad Yadav was one among them to fuel the dispute while others involved in the incident were lawmakers Surendra Yadav and Laxmi Chaudhary of Federal Socialist Forum Nepal. They clashed with one another after the lawmakers sought equal share of budget for various development projects in their respective constituencies.

One of the participants, requesting anonymity, said that Deputy Speaker Yadav, who is from Rastriya Prajatantra Party-Nepal (RPP-N), was the one who ignited the dispute. "Being provoked by the deputy speaker, Laxmi Chaudhary attacked Surendra Yadav and the clash later took a nasty turn," he said.

Officials at the District Development Committee (DDC), Saptari, said that selection of development projects in constituency number two of the district was done very late. They finally submitted the plans of selected project only after repeated pressure from the DDC.

"Deputy Speaker Yadav is to be blamed for the delay. His demand to divide the budget rather than projects caused the dispute and delay," said lawmaker Ashok Kumar Madal from the same electoral constituency. "How can leaders holding such a responsible post at the central level make such an unreasonable demand at the district level?" he questioned.

Various activities of Deputy Speaker Yadav have drawn strong criticisms from all sides. He has been dragged into controversy not only in inter-party issues but also within his own party as well.

"Yadav declared his son as party's district chairman against the spirit of the party's rank and file. It was also against the party statute. He did so by misusing his power and authority," said Balak Das Chaudhary, a RPP-N leader. He termed it unfortunate that a leader holding such a prestigious position of the deputy speaker misused his power and influence just to appoint his own son in a party position at the district level. "The way he forcibly promoted his son is against the democratic values," said Chaudhary.

Employees at the DDC also expressed frustration over Yadav's intervention in various projects and activities at the local level. "Yadav has also forcefully appointed an individual as Chief District Engineer and acting Local Development Office despite the person not having an engineering degree," said a DDC official under the condition of anonymity.

Likewise, it has come to light that family members of Yadav are holding various positions in the DDC. His son Aakash has been holding the post of "social mobilizer" in Local Governance Community Development Program (LGCDP) of the DDC.

Similarly, his daughter-in-law Sunita Kumari holds a position of coach at "Sunaula Hajar Din" program organized by the DDC with the help of World Bank. A source claimed that Yadav's another son Ashok Kumar and nephew Chandan Kumar also holds important positions in DDC programs.

Meanwhile, Yadav accused those who opposed him of making baseless claims. "I had no role at all to play in the appointment of any members of my family," he said. He also stated that his family members reached their positions due to their own capability.

BUTWAL, Feb 19: When other children would go to school clutching books and exercise books, Krishni Tharu, then six-year-old, worked as... Read More...