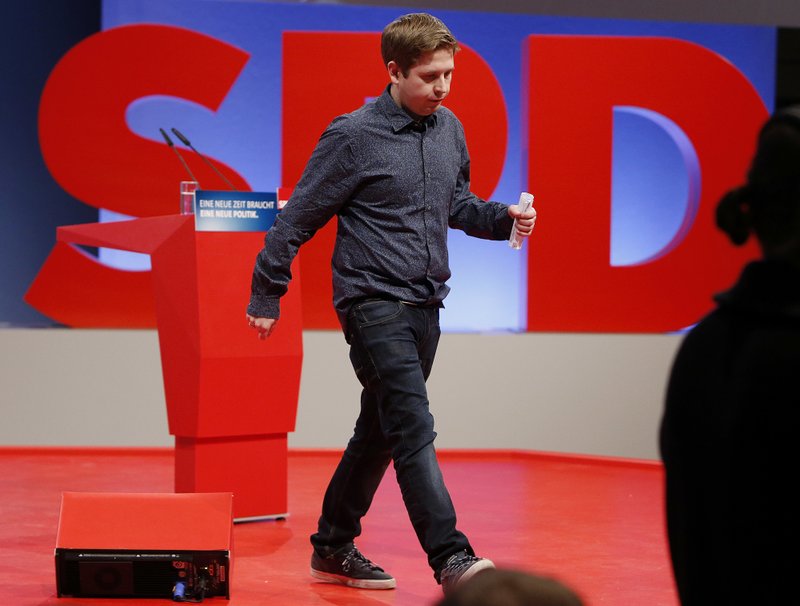 BERLIN, Mar 2:  The young rebel behind a political campaign that could cause turmoil across Europe looks like a typical German university student — he’s usually in sneakers, jeans and a hoodie, has soft features, short blond hair and an overall polite demeanor.

But don’t underestimate baby-faced political science student Kevin Kuehnert based on his appearance. As the leader of the youth wing of the center-left Social Democratic Party in Germany, the 28-year-old is the driving force behind an attempt to torpedo a pact between his party and Chancellor Angela Merkel’s conservatives to form a new government, which could have wide-ranging consequences.

If Kuehnert gets his way, the 463,723 members of the SPD will reject the pact when results are released this weekend, following weeks of tireless campaigning across the country with the message that the party needs to get back to its socialist roots and not compromise to form a new “grand coalition” with Merkel — condensed to #NoGroKo for social media purposes.

“There’s a whole generation in Germany who has not experienced anything but Angela Merkel as chancellor,” Kuehnert told The Associated Press at his party headquarters in Berlin, occasionally sipping coffee from a big white mug as he ruminated.

“They grew up with the sense that there’s somebody at the top of this country who permanently delays decisions about important issues.

A native Berliner, Kuehnert’s parents both work in the city’s administration and he works part-time as a member of the Berlin state legislature when he’s not taking online classes at Hagen University. He’s also a member of a local district council in the city’s Tempelhof-Schoeneberg neighborhood.

In what little free time he has, he loves to watch a variety of sports on TV, and said on Twitter that he has an affinity for Averna, an herb liqueur from Sicily.

Elected head of the SPD’s youth wing known as the Jusos — short for “Young Socialists” — in November, his penchant for impassioned speeches and dedication to the anti-grand coalition cause shared by many in the party have propelled him to the forefront of the fight.

Merkel has governed for 12 years, the first four and last four in a grand coalition with the Social Democrats, and four years with the pro-business Free Democrats in between. While support for her conservative Union bloc has remained fairly solid, above 30 percent, the Social Democrats are far from the levels they reached under Merkel’s center-left predecessor, Gerhard Schroeder. Recent polls show them with only around 17 percent support, down from 20.5 in the election.

Kuehnert’s main contention is that only by going into opposition can the Social Democrats get back to really pushing the issues that will invigorate their base and re-ignite support.

But if members reject the coalition, it will trigger a chain of events giving rise to many unknowns.

First, Merkel would be forced into a minority government, which she has said she does not want and would have difficulty forging a meaningful agenda. Or Germany will have to hold new elections — and whether she’d run again isn’t completely certain.

New elections would mean at least months of continued gridlock, with Merkel at the head of a caretaker government without the mandate to tackle the ambitious European reforms proposed by French President Emmanuel Macron as Britain prepares to leave the European Union.

The latest polls show a new election would likely yield broadly similar results to September’s, but with the Social Democrats potentially weakening further — setting the stage for the same problems that have led to the unprecedented difficulties in forming a government since September.

But for Kuehnert, there’s no other way.

“Another four years of another grand coalition would mean more political paralysis and further delay of important issues that need to be tackled,” he said, voicing the discontent of many Social Democrats, especially the young ones.

So, last month, Kuehnert decided to turn his generation’s dissatisfaction into activism and embarked on a “no-groko-tour” across the country with more than two dozen appearances where he preaches that Germany should not have another four years of groko-induced “paralysis.”

He shows up to packed halls; people whip out their smartphones to snap pictures of their new hero and push through the crowds to get a selfie with him. Many are young party members who say they are fed up with the established party leaders’ constant in-fighting, backstabbing and egoistic haggling for powerful jobs.

“People are very relieved that we talk openly at these events about contents and all the issues that matter,” said Kuehnert, who joined the party in 2006 as a teenager.

For Kuehnert, those issues are the core of Social Democratic politics, things like affordable housing in big cities, improved health insurance, and equal pay for men and women.

The party’s leaders, such as Andrea Nahles, Olaf Scholz or Foreign Minister Sigmar Gabriel — who are all in favor of another coalition government with Merkel’s conservatives — have been surprisingly restrained in criticizing Kuehnert’s rebellious stance. They acknowledge the need to reinvigorate the party but say they can push Social Democratic issues better from within government than from outside, and say many of their ideas are enshrined in the coalition agreement.

Resistance to a new grand coalition from within the Social Democrats forced the party to hold a special congress last month, where delegates voted 362 to 279 in favor of opening talks with Merkel’s conservatives — a blow to Kuehnert and other opponents.

Now the entire membership is voting by mail on whether to approve the deal that the two sides worked out. Voting ends Friday and the results are to be announced Sunday.

“We know it’s a tight race,” Kuehnert said. “Somebody is going to lose this vote.”

VIENNA, March 23: The grieving family just wanted to see the body one last time before his cremation. But peeking into... Read More...