The prime minister does not seem serious on corruption 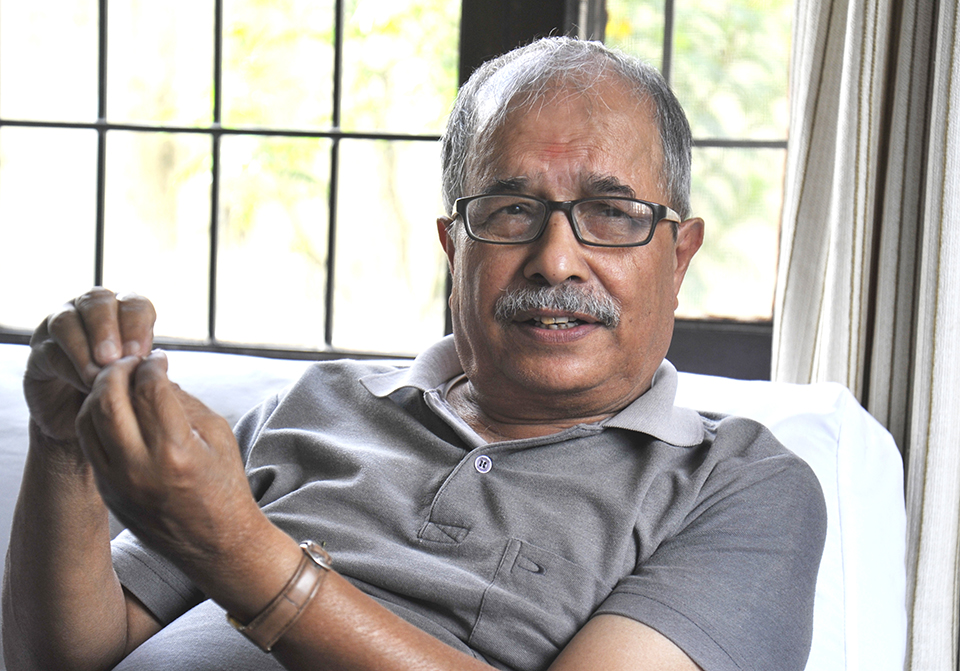 As the chief commissioner (2001-2007) of the Commission for Investigation of Abuse of Authority (CIAA) Suryanath Upadhyay is credited with initiating investigation into many landmark corruption cases, including against half a dozen ministers. What does he make of the state of corruption in Nepal right now, and the CIAA’s role in controlling it? Republica’s Mahabir Paudyal solicited his insights in an interview at his Budhanilkantha residence on Tuesday evening.

Year after year, we are sliding down Transparency International’s corruption index. How do you assess the state of corruption in Nepal today?

In the past few years, corruption has crossed all limits, at all levels, and it is now organized and institutionalized. In the past, corruption was sporadic. Today, it has become pervasive. There are instances where there is strong link between the corrupt and those in the government, the legislature and the law enforcement agencies such as Nepal Police. The nature of corruption has undergone a fundamental shift but our strategies to control it are the same. This is why corruption is rising.

Is this also because corruption has found social acceptance of a sort?

I would not see it that way. In fact, more and more people are speaking out against corruption today compared to the past. For example, there was huge public outcry against some recent government steps. When the government allowed medical education sector to go its own way, people spoke out. There have been rallies and media has vigorously opposed some of the flawed steps of the government. Take land procurement scam of Nepal Oil Corporation. Your newspaper, the civil society and the people in general rallied against it. People have spoken against irregularities committed by Director General of Internal Revenue Department Chudamani Sharma as well. So it would be wrong to say corruption has found social acceptance. It seems like nobody is opposing corruption as it has become pervasive, spread across so many sectors that our little effort to fight it seems inadequate. Like I said, corruption has infected the legislative, the executive, and to some extent, even the judiciary.

General public and the media have spoken against corruption and they have made some impact. Wasn’t the parliament forced to withdraw amendment to allow corruption convicts to contest elections because of media and public pressure? Yes, I am talking about the amendment sought by some Nepali Congress leaders on Election Act. This is the latest example. There are many other instances. As the wings of corruption are spreading so is the public resistance against it. But there is no political determination and will to combat it, which hampers our corruption control initiatives. There is flagrant lack of political will to combat corruption. This is why even while the media and the common people are relentlessly speaking against it, nothing much happens.

You served as the CIAA chief for six long years during which you prosecuted many noted bureaucrats and ministers. What is the fundamental difference between then and now?
When I was the CIAA chief, corruption was limited to state functionaries like civil servants and the ministers. The link did not extend beyond the person suspected or proven to be corrupt. So if you investigated a person for corruption, you would be investigating only him. Today, the scourge of corruption goes beyond the person who is directly implicated. The person implicated in corruption drags in the whole gamut of state institutions, such as the executive and the legislative. The situation with our parliament is that the persons who need to be regulated are themselves devising regulations. So you have legislators with clear conflict of interest devising regulations in education, health, medical education and banking sectors. So naturally there will be many loopholes so that they can be manipulated later. In corruption parlance, we call it policy corruption, whereby you change or devise policies in a way that favors the corrupt. This is not how it used to be when I was in the CIAA.

Can you speak a little about corruption in our judiciary?

Judicial corruption is the least investigated area. But there is a feeling among the people that corruption has entered the judiciary as well. In cases relating to medical colleges, the judiciary intervened by way of writ petitions. The court has agreed to raise student quota for medical colleges. It should not have done that. The court has ordered not to terminate contracts even in cases of shoddy construction, ruling that the bank guarantee of contractors would not be forfeited. This should not have happened either. All this makes people suspicious that our courts are also not immune to corruption. But like I said there has not been serious study on judicial corruption. Interestingly, not a single justice or judge has been prosecuted in charge of corruption in this country. In fact Nepal may be the only country with this kind of record. Judges come from the same society we do. It is hard to believe a section of civil service is always corrupt and another section, say judicial service, is not corrupt. This raises a question mark on integrity of justice delivery officials.

During your CIAA tenure, you dealt with some high-profile corruption cases. Can you share with us your experience? What kind of political pressures did you face?
Let me start with your second question. You feel pressure, political or other kind, when you invite it. If you do not invite it, it does not come to you on its own. If you are determined not to entertain any kind of influence or pressure, nobody will exert such pressure on you. In my case, I was determined that I would work for justice, rule of law and corruption control. Thus it depends on the kind of person in charge of a constitutional body. Those looking to put pressure on me knew right at the start what kind of person I was. Such people approach only those amenable to pressure. I was not one of them.

Otherwise, I would not have been able to prosecute so many officials and ministers.
Regarding your first question, I had prosecuted 22 officials from the Department of Revenue, a landmark CIAA action. And we did not initiate that action randomly. We meticulously studied each case for about three months. I have recounted those experiences in my book Akhtiyarma Chha Barsa (“Six Years in CIAA”, 2008). I initiated action against them only when I was sure these people were really corrupt. Had they been innocent, the image and credibility of CIAA would have been greatly tarnished. This action changed people’s perception towards CIAA. Perhaps for the first time it started to be taken seriously. In the second landmark case, CIAA prosecuted some ministers. Back then it was easy as the political parties themselves had established a body called Property Investigation Commission under a Supreme Court judge to investigate property details of all state functionaries, including ministers. This commission came up with a list of people whose property details did not match their income levels. The commission forwarded the report to the government which then forwarded it to us for action. In a way, the government and the commission had made our job easy. In other words, you can say there was willingness on the part of the commission and the government to prosecute corrupt persons. Five ministers were prosecuted. Some of them were indicted by the court and some also served jail sentence. A couple of cases are sub judice at the Supreme Court.

Was this the first instance of the CIAA prosecuting ministers?

It was. This had not happened before I became the CIAA chief. Post-1990, that was the only case when top politicians were prosecuted. During the Panchayat era, CIAA used to be called ‘Akhtiyar Durupayog Nibaran Aayog’ which served as prosecutor, investigator and decision maker. The constitution of 1990 gave the CIAA power to investigate corruption cases and prosecute the corrupt. During the Panchayat era, the old incarnation of CIAA had prosecuted some ministers but they were all later freed. After 1990, the Special Court was established and both this and Supreme Court started to rule on corruption cases.

Interestingly, since I prosecuted those ministers, not a single minister has been investigated, let alone indicted, in more than a decade. It is as if Nepal has become corruption-free, when all accounts suggest corruption has actually increased manifold.

Why do you think has CIAA failed to prosecute NOC Managing Director Gopal Khadka even as his involvement in corruption has been established?

I am not aware of what CIAA is doing on this particular case. I have learned that CIAA is looking into it. I hope something is being done about it. But we should also be aware that CIAA cannot take action against an individual based only on media reports. First, it has to collect all the information, investigate the case thoroughly and only then it can initiate action. Otherwise, it only becomes another excuse to question CIAA’s credibility. When CIAA cases are defeated in court, the constitutional body earns a bad name.

Today’s CIAA is seen as rather ineffective in controlling corruption. Why is this the case?

I agree with you that in the past few years CIAA is increasingly perceived as non-functional. Many seem to think the anti-corruption body is itself corrupt. This is unfortunate. CIAA should rise to the occasion and come out with definitive steps in investigation of corruption cases and prosecution of the corrupt. There are many cases that merit investigation. CIAA needs to change its investigation strategy as well because the nature of corruption has changed and it has spread to almost every sector. It needs to redefine its role in the changing context. If a person is involved in policy corruption, he needs to be investigated as well because such persons leave behind loopholes, leaving space for future corruption.

The chief executive of the country is primarily responsible for corruption-control. But see what our prime minister is doing today. He constitutes the largest cabinet in history, including those who are said to be corrupt. Everyone knows that the one and only mandate of this government is to hold all three sets of elections and hand over power to a new government. Why does prime minister need such a big cabinet for this? Is this not corruption as well? The prime minister’s commitment is prerequisite to eradicate corruption. Unfortunately, our prime minister has shown no such commitment. Had he shown at least some commitment, the CIAA would also have been more proactive. The PM could send all media reports of corruption to CIAA for investigation. But he does not seem to care about it all.

How will the kind of systemic corruption you talk about hamper the task of institutionalization of the new federal democratic republic?

CIAA needs to be especially vigilant in the time of political transition as it is during such times that corruption flourishes, when corrupt elements become especially active. It needs look into the cabinet decisions as well. There is a notion that cabinet decisions amount to policies and CIAA has no jurisdiction to investigate such policies. This is a faulty view. I had investigated Lauda Air scam that originated in a cabinet decision. But we investigated it anyway. We did not shy away, saying it is a policy matter.

Nepal and the UAE established diplomatic relations in 1977. The bilateral cooperation between the two countries has since increased manifolds.... Read More...

Nepal and the Philippines may be geographically far apart, but these two countries share many similarities that bring them together.... Read More...