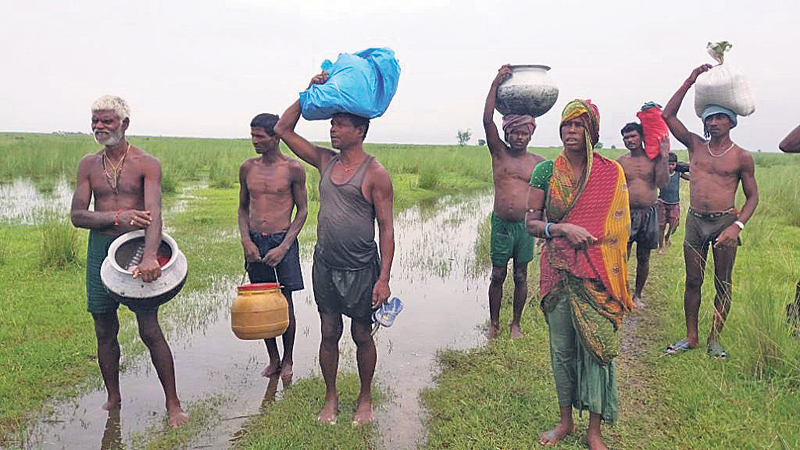 A group of Gobargada residents on their way to safe locations along with some of their belongings on Monday.

GOBARGADHA, July 27: Hari Narayan Yadav of Gobargadha in Saptari is surrounded by multiple problems. Sapatakoshi River lies just near his house and the water level has been increasing day after day. Local authorities have already asked the locals to remain on high alert as the water level in the river soar all time high for the year. However, these warnings have not reached locals like Yadav whose settlement is surrounded by the water of Saptakoshi. They know that the floodwaters can sweep their house anytime, but still don't know how they should be doing.

Floodwater is not the only problem that the isolated settlement of Gobargadha is facing. Cut off with the outer world due to the swollen river, around 300 families in the area are also deprived of basic commodities.

“We don't have any means to get across the river to fulfill our daily needs. The swollen Sapatakoshi is not showing any signs of getting to normalcy. We do not have means to get out of here and get the necessary things for feeding our family,” Yadav said.

Gobargadha settlement is surrounded by Saptakoshi and small rivulets from all side - making it an islet that is threatened by the floodwaters. In normal days too residents have difficulties in connecting with the market place.

“To escape out of here, we need to cross at least half dozen of small rivers. But for that we need boat and we don't have any,” Yadav described expressing anger that the whole settlement has been forced to live in terror due to lack of boats to evacuate.

(Some Gobargada women with their children. Despite eminent threat of being swept away by the swollen Saptakoshi River, many families like them have been forced to stay their in lack of means to relocate to a safer location.)

The problem is however not a new one. Considering their plight, local authorities had released Rs 150,000 for purchasing three boats for the settlement. While a major chunk of this budget 'leaked out' on its way to the settlement, the boats that they received with the remainder of the budget remained with local leaders.

“Nearly half of the budget allocated for the purchasing the boats had finished in the name of commissions by technicians. We have heard that three small boats were purchased for us from the remaining budget. But these boats never reached us. They are used by some local leaders,” narrated Ram Sada, another local of Gobargadha.

Upon further questioning, Sada said that those boats were not available for the public, like him, to use. “Leader 'type' people took the boats. They use the boats for their personal benefit, others like us are not allowed to use them,” Sada said.

The settlement's plight came to media's attention after district police chief SSP Bhim Dhakal stated that 150 families of the settlement were out of contact. Latest investigations have revealed that none of the families have gone missing but that the whole of the settlement was under flood threats. Local authorities have so far not made any arrangements to evacuate the settlement despite calls from the locals.

Lack of food and basic health care
Shanti Devi Sada of Gobargadha is suffering of fever since the last four days. The 50-year-old decided to get health care at any cost and was heading to Hanumannagar. She had already crossed three rivers on the way. She was all wet and shivering while talking to this scribe.

“Had there been a health post in our place, I would not have been forced to take this risk. We don't have even a basic medicine for common cold and fever,” she said adding that she had to get out of her house after trying all kinds home remedies.

Some of the locals were found suffering from lose motion, while some others were gripped by viral fever. They had also dared to cross the rivers on their own. But crossing the rivers without a boat had further deteriorated their health.  “One or two members of almost all the families are sick. As they get no medicine in village, they are forced to cross the rivers,” said local health volunteer, Tetaridevi Yadav.

According to Tetaridevi number of locals falling ill during monsoon is common in the settlement and so is the scarcity of medicine during the period. “Though fever and common cold are common ailments in this settlement, lately some are complaining of other health problems like stomach pain and headache. But there is nothing we can do,” said Tetaridevi, whose own family members have fallen sick these days. “My own daughter-in-law and grandchildren are in need of medicine. And there is no way for us to get medicine for them,” she said.

Locals of Gobargadha are equally deprived of food supply. Due to the lack of access to the market since last few days, they have not been able to buy necessary things. Even cattle have been affected as fodder is not available, Mishirlal Yadav said. “We can't keep commodities in stock as we don't have that much money. Because of this inability and lack of means to get across the rivers, we are now facing scarcity of food also.”

MYAGDI, Dec 20: Despite the information technology penetrating the world, the age-old tradition of assigning the Katwal (messenger) to relay... Read More...

Locals enraged at decision to dump waste by riverside

MELAMCHI, Aug 1: The swollen Indrawati river has entered the dumping site constructed on its bank by Melamchi Municipality in... Read More...