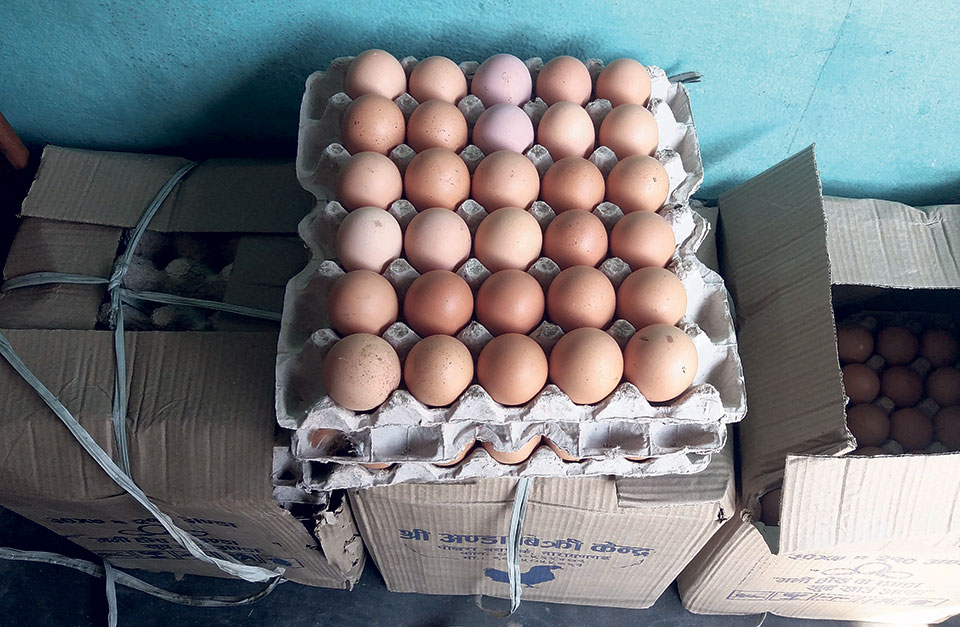 The meeting of association's central committee held on Sunday decided to fix the price after seeing continual drop in the price, said Shivaram KC, president of the association.

Retailers sell eggs to consumers after adding a margin of Rs 5 per crate on the purchased price.
"During monsoon, transportation of eggs was difficult due to floods and landslide. This caused the drop in egg price," KC said, adding that consumption of eggs and other meat items are minimized during the Nepali month of Shrawan (mid-July to mid-August) and during the fortnight-long Hindu rituals of sorha shraddha (paying homage to deceased parents) that precedes the Dashain festivals.

Four months ago, the purchase price was Rs 360 for large-sized and Rs 330 for medium-sized eggs per crate.

The farmers get much less price than what the consumers pay the retailers, according to KC.
"The decision was taken as the egg producers feared the price would drop below the break-even point," he told Republica.

According to the association, the investment per egg used to be Rs 9.30, which now stands at Rs 10. He said that the price has been determined so that the farmers get Rs 11 per egg.

"The price of chicks of Layers breed is going up. The price of one chick is Rs 175 at the moment which used to cost Rs 80 or 90. Farmers suffer because of continuous drop in the price," KC said.
However, he added that despite the price determination, farmers might be compelled to sell eggs at cheaper rates due to various reasons.

The price has been determined taking Chitwan as the base district, as it produces almost half of the total eggs produced in the country.

KC said that the price of eggs could go up during the Dashain and other festivals.

According to the statistics of NEPA, Nepal Egg Producers Association, two million eggs are consumed in Nepal every day. Four years ago, the country used to produce two and a half million eggs every day. The production has gone down as farmers have been displaced from the trade because of recurring viral infections to the poultry.