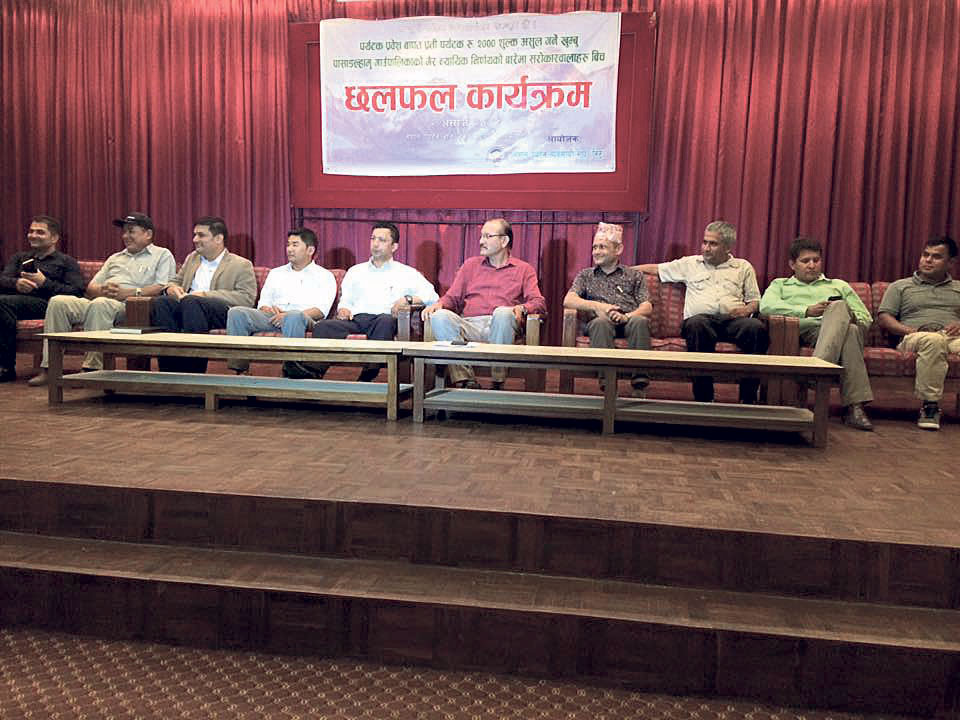 KATHMANDU, Sept 19: Experts and tourism entrepreneurs have said that clarification in the constitution was required to address disputes about who should collect tourism tax. They have suggested that sharing of revenues after collecting it at the central or provincial level would be the best option.

Recent news about Khumbu Pasang Lhamu Rural Municipality of Solukhumbu district collecting tourism tax locally has drawn flak from the tourism entrepreneurs. On the other hand, there is no clear legal provision about the distribution of tourism taxes collected centrally.

Schedule 8 of the constitution says that local levels can collect tourism tax but it has no clarity on the collection modality, and necessary laws are not made yet.

Khimlal Devkota, a fiscal federalism expert, has said that levying of such fees by local bodies was not a mistake on the part of the local bodies. Rather, confusion existed due to lack of clear provisions in the law.

“Lack of homework has raised this issue and it might get serious in near future,” Devkota said, adding: “There are confusions about tax collection. The government has provided authority to both the provincial and local levels, which has created confusion. The government should take steps to solve this issue immediately.”

Taxes collected by the central government as per the Local Governance Act should hereafter be distributed to the local levels, Devkota said, adding that only an appropriate model of resources sharing can solve this dispute.

Devkota further suggested addressing this issue by forming a fiscal commission immediately as per part 26 of the Constitution of Nepal 2015.

Dipak Mahat, president of National Tourism Entrepreneurs Association of Nepal, also partly agreed with Devkota on sharing of the resources. However, he suggested that the central government should collect tourism tax to make it an integrated and hassle-free process.

“Like tourism sector, dispute on collecting taxes may surface in other sectors too, and the impact may be huge if decisions about tax collection are made in an ad hoc basis,” Mahat said, adding: “We are still under the process of implementing federal system in our country.

We are yet to complete this process so in such case this is not the right time to determine the modality for inland revenues.”

According to Mahat, the bill to be submitted to the parliament has mentioned that the local levels cannot levy charges directly to the foreigners.

“The government could then distribute taxes to the local levels,” he added.

Bill on money laundering to be amended through fast track process

KATHMANDU, Feb 1: It has been decided that the bill to amend some laws related to money laundering will be... Read More...

KATHMANDU, Feb 1: The price of gold has increased by Rs 500 per tola in the domestic market today. ... Read More...

Agitating IOM students stage sixth round of protest against Dean (Photo Feature)
46 minutes ago
If you want to seek your property share, go to Baluwatar: MP Agrahari
56 minutes ago