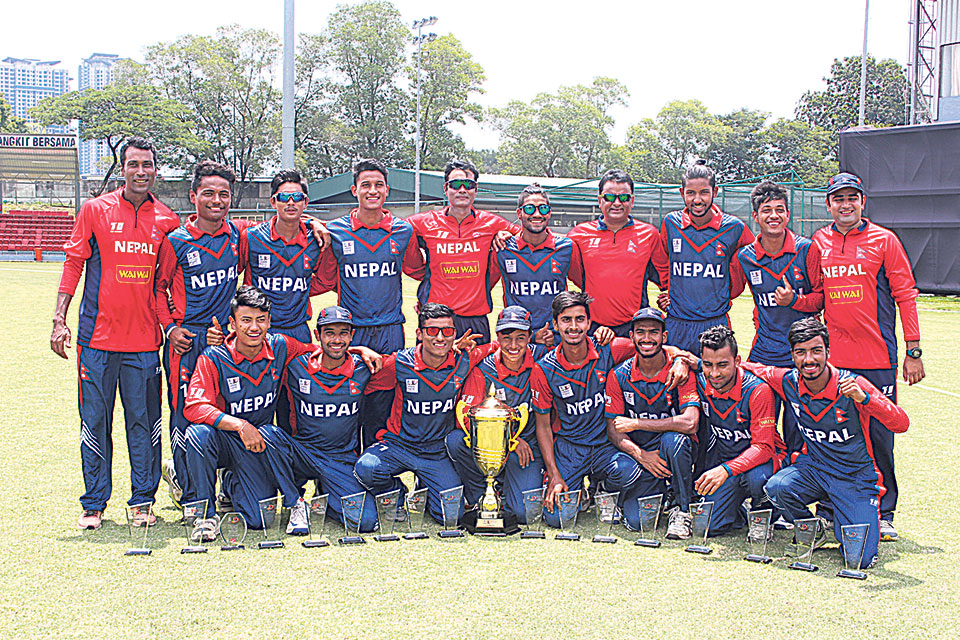 Members of Nepal U-19 cricket team pose for a group photo with the trophy after defeating Hong Kong in the ACC U-19 Eastern Region Cricket Tournament final at the Kinrara Oval Cricket Ground in Malaysia, on Sunday.

By winning the tournament, Nepal has qualified for the ACC U-19 Asia Cup where it will get opportunity to compete against Test playing nations.

In the summit clash played at Kinrara Oval Cricket Ground, Kuala Lumpur, Nepal won the toss and opted for bowling before restricting Hong Kong for 76-10 in 32.1 overs. In reply, Nepal got 79-5 in 14.4 overs.

Nepal’s head coach Binod Das said that winning the title was an important achievement, even when the country lacked a proper cricket structure. “We have won such age group tournaments several times in the past. But winning this competition at a time when we don’t have any proper domestic cricket structure is a positive development,” said head coach Das.

He also said that his team was now highly motivated to do well in the upcoming Asia Cup after becoming the champion in the regional tournament.

“This triumph has boosted the confidence of my players and they are now motivated to give tough fight to the Test playing teams in Asia Cup,” added Das.

Bowlers once again starred in Nepal’s thumping win as Sandeep Lamichhane claimed 3-8 in 6.1 overs and Shahab Alam pocketed three wickets for 15 runs in seven overs. Likewise, skipper Dipendra Singh Airee and Anil Kumar Sah added one wicket each for the winning side.

Hong Kong had disastrous batting as only three batsmen managed to touch the double-digit figures while two others were out for duck.

Meanwhile, Nepali batsmen couldn’t give positive start to the innings as opening duo Sandeep Sunar and Mohamed Asif Sheikh built a partnership of only 10 runs for the first wicket. Sheikh was dismissed for just one run but Sunar tried to lay the game’s foundation by building a 28-run partnership with Anil Kumar Sah. Sunar struck 19 runs in 21 deliveries that included four boundaries. Likewise, Sah made 16 runs facing 13 balls.

Meanwhile, skipper Airee said that his team still has to improve the batting to give impressive performance in the Asia Cup. “We are good in bowling and fielding but batting still has to be improved. And alongside that, we also have to give emphasis on fitness as well,” said Airee.

INDIVIDUAL AWARDS
Nepal dominated the individual awards of the tournament with Captain Dipendra Singh Airee and former Captain Sandeep Lamichhane declared as the player of the series and the best bowler, respectively. Singapore’s Siddhant was announced as the tournament’s best batsman.

Player of the series Lamichhane claimed a total of 16 wickets throughout the tournament. Lamichhane was crucial in Nepal’s unbeaten form in the competition.

Spinner Lamichhane claimed 7-6 in four overs against Thailand and pocketed 4-7 in seven overs against Bhutan to help Nepal register the impressive victories in the first two matches.
In the final clash against Hong Kong as well, Lamichhane was in top form as he bagged three wickets giving away just eight runs in 6.1 overs.

Similarly, skipper Airee claimed a total of 13 wickets in the tournament. His five wickets against Malaysia in the semifinal were crucial to guide Nepal to the summit clash. Best bowler of the tournament Airee had taken seven wickets in the three group stage matches played against Thailand, Bhutan and Singapore.

Pakistan’s historic win against India in the World Cup

Man bites wife and daughter to death
7 hours ago

UML will stay neutral regarding the resignation of the Chief Justice: Oli
10 hours ago

Gold price up by Rs 200 per tola, silver price remains stable
8 hours ago

Light to moderate rain forecast for today
8 hours ago