‘A pint of beer a day keeps doctors away’ 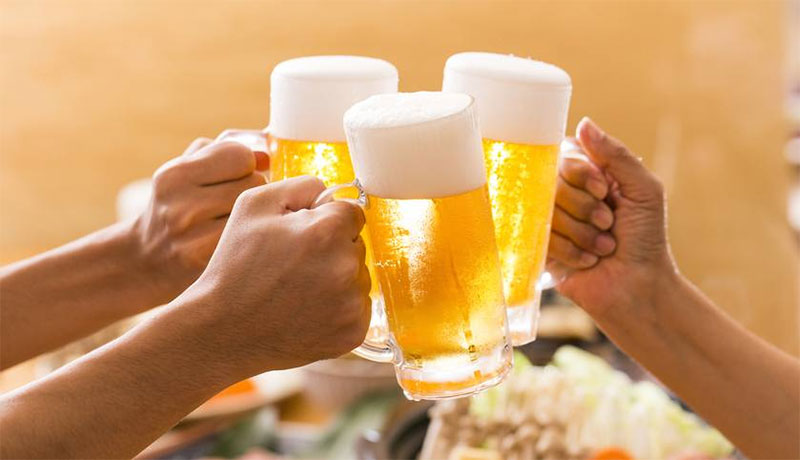 Several studies have shown that the fermented beverage, in moderation, is actually beneficial to our health

Dashain is just around the corner. If you are still eating healthy from your New Year’s resolution this year, you might be glad to know that drinking beer has many surprising health benefits.

So, go ahead and enjoy that green beer, because it might just be doing you some good! Remember, though, to always drink in moderation, and be sure to get a designated driver to get home safely.

Several studies have shown that the fermented beverage, in moderation, is actually beneficial to our health. Apart from helping vegetarians get their B vitamins, beer has also been shown to reduce the risk of a number of health problems, such as cancer, diabetes, Alzheimer’s, and heart disease.

A 2009 Tufts University study showed that one to two daily drinks strengthen our bones, due to the high levels of silicon found in beer. This is great news for women, as we are more susceptible to osteoporosis than men.

The Journal of the American Medical Association found that consuming one or two drinks a day can reduce the risk of stroke by about half. This is because alcohol is a blood thinner, which improves blood circulation to the brain.

Beer drinkers live longer. A review of 50 studies has shown that the lifespan of moderate drinkers increases compared to non-drinkers and excessive drinkers, according to a 2005 report by the USDA.

There have been numerous studies that have shown that the consumption of moderate alcohol also decreases the incidence of Alzheimer's and improves memory, concentration and reasoning.

Beer is fat-free, cholesterol-free and low in carbohydrates—a 341-ml bottle of beer with 5 percent alcohol has 5g of carbohydrates.

Beer is also a source of soluble fibre, which comes from the barley. According to The Brewers of Europe, an organization that represents European breweries, two glasses of beer can provide 10 percent of your recommended daily fibre intake.

Here are 10 surprising and healthy reasons to cheer about your next beer.

Beer contains high levels of silicon, which is linked to bone health. In a 2009 study at Tufts University and other centers, older men and women who swigged one or two drinks daily had higher bone density, with the greatest benefits found in those who favored beer or wine. However, downing more than two drinks was linked to increased risk for fractures.

For the best bone-building benefits, reach for pale ale, since a 2010 study of 100 types of beer from around the word identified these brews as richest in silicon, while light lagers and non-alcoholic beers contained the least.

A 2011 analysis of 16 earlier studies involving more than 200,000 people, conducted by researchers at Italy’s Fondazion di Ricerca e Cura, found a 31 percent reduced risk of heart disease in those who quaffed about a pint of beer daily, while risk surged in those who guzzled higher amounts of alcohol, whether beer, wine, or spirits.

More than 100 studies also show that moderate drinking trims risk of heart attacks and dying from cardiovascular disease by 25 to 40 percent, Harvard reports. A beer or two a day can help raise levels of HDL, the “good” cholesterol that helps keep arteries from getting clogged.

A study in Finland singled out beer among other alcoholic drinks, finding that each bottle of beer men drank daily lowered their risk of developing kidney stones by 40 percent. One theory is that beer’s high water content helped keep kidneys working, since dehydration increases kidney stone risk.

It’s also possible that the hops in beer help curb leeching of calcium from bones; that “lost” calcium also could end up in the kidneys as stones.

A beer a day may help keep Alzheimer’s disease and other dementia at bay, researchers say.

A 2005 study tracking the health of 11,000 older women showed that moderate drinkers (those who consumed about one drink a day) lowered their risk of mental decline by as much as 20 percent, compared to non-drinkers. In addition, older women who downed a drink a day scored as about 18 months “younger,” on average, on tests of mental skills than the non-drinkers.

A Dutch study, performed at the TNO Nutrition and Food Research Institute, found that beer-drinking participants had 30 percent higher levels of vitamin B6 levels in their blood than their non-drinking counterparts, and twice as much as wine drinkers. Beer also contains vitamin B12 and folic acid.

Researchers at the Harvard School of Public Health found that moderate amounts of alcohol, including beer, help prevent blood clots that block blood flow to the heart, neck and brain—the clots that cause ischemic stroke, the most common type.

Drink up: A 2011 Harvard study of about 38,000 middle-aged men found that when those who only drank occasionally raised their alcohol intake to one to two beers or other drinks daily, their risk of developing type 2 diabetes dropped by 25 percent. The researchers found no benefit to quaffing more than two drinks. The researchers found that alcohol increases insulin sensitivity, thus helping protect against diabetes.

Wine is fine for your heart, but beer may be even better: A Harvard study of 70,000 women aged 25 to 40 found that moderate beer drinkers were less likely to develop high blood pressure—a major risk factor for heart attack—than women who sipped wine or spirits.

In a 2005 review of 50 studies, the U.S. Department of Agriculture (USDA) reported that moderate drinkers live longer. The USDA also estimates that moderate drinking prevents about 26,000 deaths a year, due to lower rates of heart disease, stroke, and diabetes.

KATHMANDU, Jan 15: Petroleum Dealers’ Association has postponed the agitation program they had announced earlier against the alleged reluctance of... Read More...

Power outage in 21 places of Kathmandu Valley today (With a list of places to face power cut)
13 hours ago
Indonesia quake kills at least 42, injures hundreds
13 hours ago

How children become bullies
16 hours ago