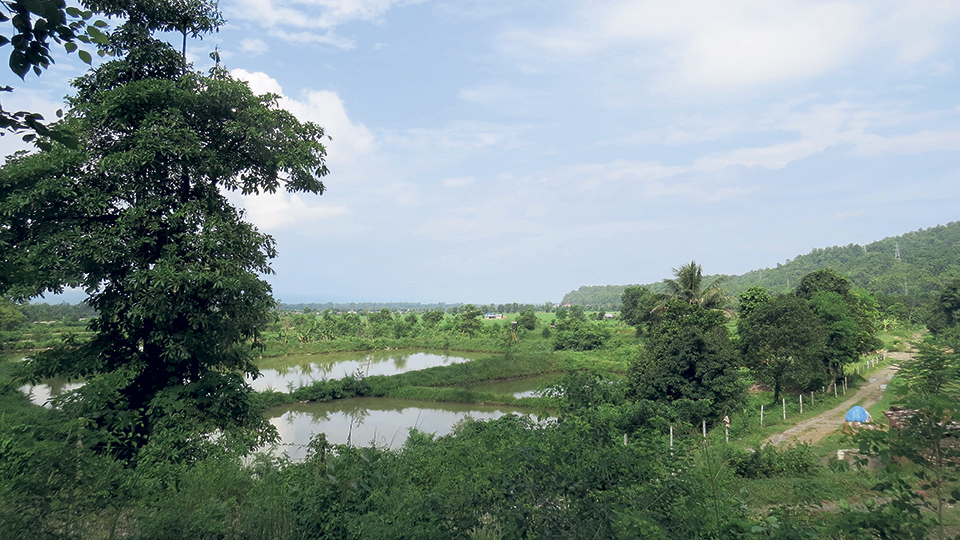 The plot of land bought by Nepal Oil Corporation in Lothar of Chitwan for setting up fuel storage facility.

CHITWAN, Sept 14: The buffer zone of Chitwan National Park (CNP) is considered very sensitive from the environmental point of view, and the construction of factories in the area is strongly discouraged. Not just that, local authorities are also strict in giving permission for the construction in the area of bridges, roads and other developmental infrastructure.

The purchase of land in Chitwan by  state-owned Nepal Oil Corporation (NOC), which has become controversial  due to financial irregularities, is also causing concern  because the land lies in the buffer zone area. The oil supply monopoly has purchased over 23 bighas of land in the district for  constructing its oil depots. This could have catastrophic consequences considering the sensitiveness of the  location.

The procured land is near CNP’s forest areas. The  Lothar and Rapti Rivers are also not far away. Due to these reasons, NOC has been facing a torrent of criticism from all  corners. It has been criticized for purchasing land in an inappropriate location.

Not only is the land at risk of flooding but  construction of an oil depot there could  jeopardize the rich biodiversity of the buffer zone.

NOC had paid up to five times the current market price in the purchase of lands in Chitwan, Sarlahi, Jhapa, and Nawalparasi districts. NOC chief Gopal Khadka has been accused of pocketing millions  in illegal commissions from the multi-billion rupees land deal, in collaboration with local land dealers.

According to locals, CNP has also prohibited the extraction of rocks and sand from the Lothar River as this could affect the river level to the detriment of nearby human settlements. As  NOC is set on constructing huge infrastructure in the buffer zone, locals are curious  how the national park authorities will react.

“If anybody wants to construct and operate factories, they  have to undertake and environmental impact assessment (EIA). We’ll express our views during the EIA. But as of now, we have no idea how other stakeholders will react,” said conservation chief Kandel.

He further said that there are plenty of examples of big projects failing to kick off in the Chitwan-Nawalparasi area due to intervention from the national park.

CNP is listed as an UNESCO World Heritage site. It is a habitat for a wide variety of endangered wild life, including the one-horned rhino, tigers and numerous rare reptiles and birds.

KMC removes 9,000 billboards that failed to meet standards set by the metropolis

KATHMANDU, Jan 26: Kathmandu Metropolitan City (KMC) has said that 9,000 unauthorized hoardings and signboards have been removed so far. Read More...