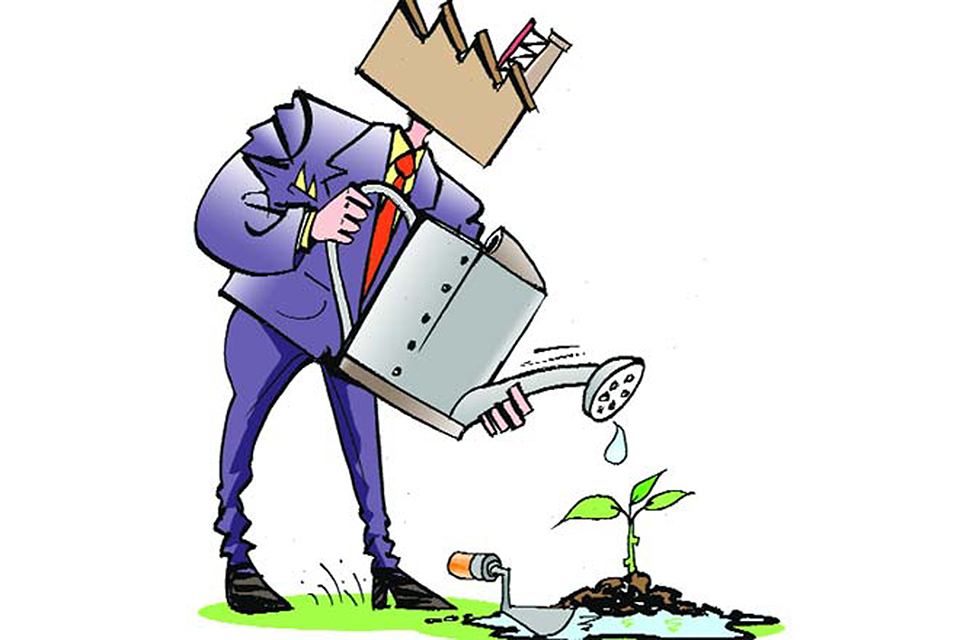 On November 22, 2016, through the gazette notification of the new Industrial Enterprise Act, the government has sought to institutionalize corporate social responsibility (CSR) in private sector businesses. Let us review this new legal provision and mull its possible ramifications.

There are two important clauses related to CSR in the new law, namely, Articles 48 and 41. Article 48 makes it mandatory for all business units with a turnover of Rs 150 million operating in Nepal to every year allocate a minimum 1 percent of their profit on CSR activities. Eligible business units are required to submit their CSR annual plans together with progress reports to concerned office within three months of the end of fiscal year.
Likewise, Article 41(5b) of the Act makes penalty provisions: any business unit failing to abide by provisions made under Article 48 are subjected to a penalty equivalent to 0.75 percent of annual sales turnover. The new law governing banking and financial institutions also have similar provision related to CSR.

The April Earthquake of 2015 may have hastened the inclusion of CSR in the new industrial enterprise law but the idea has been basically borrowed from India where CSR was made mandatory in 2012. The CSR eligibility and regulations in India are far more elaborate than in Nepal. Eligible companies are required to allocate 2 percent of their average net profits of three preceding years. In India the new provision is expected to pump InRs 125-150 billion into CSR activities. Let us look at possible ramifications of our own new legal provisions related to CSR.

What is it anyway?

First, the new provision opens up new debates on CSR in Nepal starting with definition and conceptualization of what constitutes CSR activities. There is already controversy over whether minimum one percent is to be charged over gross profit or net profit. If it is to be charged over gross profit, will it be accommodated under Income Tax Act? How would one deal with annual submission of CSR plans and programs when a single business activity, say construction works, runs over multiple years? What will you do with a company whose CSR allocation is meagre, say Rs 10,000? Will you ask it to submit elaborate CSR plans and programs?

Why is penalty for non-conformity with Article 48 only imposed on sales turnover (0.75 percent) and not under any other basis? Is this not harsh? Some businessmen are already worried about possible hassles in submitting annual CSR plans and programs and their progress reports. As the saying goes, the taste of the pudding lies in eating but the way the law has been drafted already leaves behind a bitter taste.

The modern-day popularity of this concept comes from the fact that tax monies provided by business entrepreneurs have been widely misused by governments over the world (for instance in buying arms, leakages and corruption). Hence corporate leaders came up with the idea that instead of paying taxes they would themselves spend money wisely. Had the government been functioning well there would have been no need for CSR to start with. There is already a debate in India that with mandatory CSR activities, NGOs may be squeezed out. We have yet to see how the corporate world will use their money.
Besides its mandatory provisions, I see another fundamental problem with the law. By requiring business people to deduct a certain amount from their profit for CSR activities one is basically promoting philanthropic activities. This is like saying to business people, “you have earned so much money from the society and it is now your turn to give back from your earned money”.

But CSR is not so much about spending your money as much about how you earn it. We have missed this fundamental point. By using the spending concept of CSR, together with penalty provision for non-conformance, rather than reward mechanism for good work, we are headed in wrong direction. Again, the penalty provision based on sales turnover will be a classic case of putting the cart before the horse.

With the enactment of the Industrial Enterprise Act (2016) and its regulations, the mandatory corporate social responsibility (CSR) is now... Read More...

Sanima branch at Dolakha collides with its CSR priorities

IN PICS: Rhododendron forest remains silent amid COVID-19 lockdown in Panchthar
14 hours ago