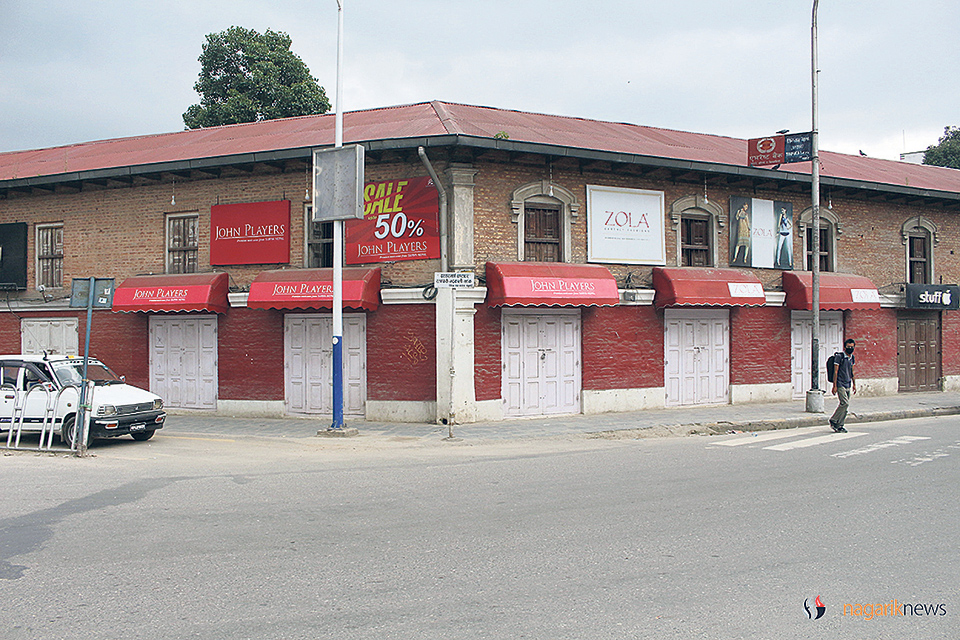 KATHMANDU, Sept 8: Traders have shut down their businesses in Durbar Marg for an ‘indefinite period’ to protest the government’s raid conducted on some of the outlets on Monday and Wednesday.

Most of the outlets that claim to sell ‘branded goods’ in one of the prime locations of the capital city remained closed on Thursday as part of an attempt to press the government to halt its ‘sudden and random’ market monitoring.

A team of Department of Supply Management and Protection of Consumers Interest led by the Minister for Supplies Shiva Kumar Mandal had sealed four outlets on Monday, while two more stores selling ‘branded items’ were sealed on Wednesday after they were found fleecing consumers by charging exorbitant prices.

Instead of cooperating with the investigation process, these outlets in Durbar Marg that claim to be selling branded cloths, footwear, apparel, shoes and accessories, among others, have resorted to an indefinite shutdown to challenge the government.

Those shuttering the shops are outlets that claimed to sell goods from reputed international brands such as Rebook, Zara, Rado, Omega, Woodland, Armani, Being Human, Arrow, US Polo, Levi’s, Octane and John Players. Whether all of them are selling genuine branded items, has not been verified yet.

Though Nike Inc said that “...we don’t have Nike stores in that area [Durbar Marg]...” in a tweet from its official Twitter handle, the owner of the Nike Store which was sealed by the government continues to say the outlet is ‘an authorized store.’

“We have been running this store following an agreement with the Nike since the last 16 years. We have document to prove the authenticity, and we will submit that document to the department,” said Rahul Agrawal, the owner of the Nike Store in Durbar Marg. He, however, conceded that the store was charging more than 20 percent profits.

“The interest rates of banks and rent in such prime location are too high, so we cannot stay in the business if we do not charge more than 20 percent,” he argued.

According to the existing law, no trader can sell goods with the profit margin exceeding 20 percent.
One of the outlets was selling shoes for Rs 26, 990 while its actual procurement cost was Rs 4,720. When asked for procurement invoice, the store could not produce it.

Not only these traders shut down their outlets as part of building pressure on the government, they have also intensified lobbying through business associations and political leaders to get off the hook.

Durbar Marg Development Committee, a group of traders of Durbar Marg, has been piling pressure on businesses of this area to close down to show solidarity to the stores accused of fleecing consumers.

They have sought the help of the Federation of Nepalese Chambers of Commerce and Industries (FNCCI) and Nepal Chamber of Commerce (NCC) to lobby with the government to end investigations of the cheating.

NCC has even met the Minister for Commerce, Min Bahadur Biswakarma, on Thursday seeking his help to end the investigation.

The development committee’s President Gopal S L Kakshapati told Republica that their protest is aimed to allow the stores to resume their operations.

“We demand the government to end this problem and open the seal. Those committing misconduct should be tried legally but the state should not terrorize the business community,” he said.
He retorted the accusation that their protest amounts to a demand of allowing traders to cheat consumers.

“You should be cautious of the reputation of the businessmen before making such allegations. What is the meaning of cheating? We have been doing business legally and if there is discrepancy, it should be investigated through a due process,” he added.

“FLEECING THE PUBLIC UNACCEPTABLE”
The stores sealed have been summoned by the Department of Supply Management and Protection of Consumers Interest to its office within three working days. The department officials said that they might refer the case to the Inland Revenue Department and Revenue Investigation Department if they found the stores under-invoicing or evading tax.

Supplies Minister Mandal has vowed to take action against the stores if found guilty. “We have carried out monitoring and sealed stores following due legal procedures. The investigation is ongoing and those found to be breaking laws and rules and cheating consumers will face the legal action,” Mandal said.

“We are not going to bow down to any business and political pressure since we are acting on the interest of consumers and the public,” he added.

He also said that the government would look into the decision of the Durbar Marg Development Committee to close down businesses in protest. “We will discuss this issue and see what we can do. Traders cannot create inconvenience to the consumers by shutting their businesses in an organized way,” he added.

KATHMANDU, September 7: Protesting against the government raid in branded outlets in the area, the Durbar Marg based retail outlets... Read More...

KATHMANDU, Sept 12: Traders of the upscale Durbar Marg area of Kathmandu have resumed their businesses after closing down since Thursday... Read More...