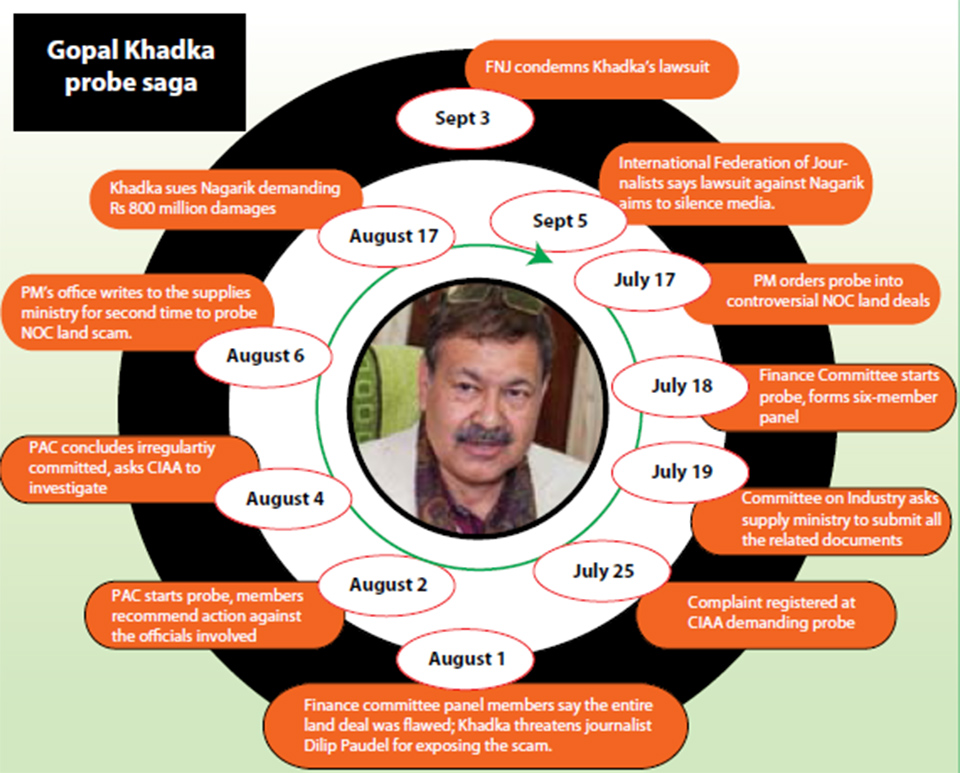 KATHMANDU, Sept 7: A parliamentary panel has prepared a report concluding that there was embezzlement by Nepal Oil Corporation (NOC) in its land purchase deal in which it paid out triple the  amount that the land owners received.

Parliament’s  Industry, Commerce and Consumer Welfare Committee  has reached  the conclusion after over a month-long investigation and field visits.

“It has been found that NOC  paid three times more  than the amount the land owners received. The committee has concluded that there was embezzlement through breach of the existing laws,” said a member of the parliamentary probe committee.

The sub-committee led by lawmaker Subash Chandra Thakuri had visited Jhapa, Sarlahi, Chitwan, Bhairahawa and consulted with the local farmers who sold the land to NOC as well as with other stakeholders, local representatives, district officials, NOC officials and Supply Minister Shiva Kumar Mandal.

Lawmakers have said that NOC Executive Director Gopal Khadka should take responsibility in the case as he was entrusted by the NOC board with authority to purchase the land for developing fuel storage facilities.  Khadka has been facing blame for involving   NOC in the land scam.

Parliament‘s Public Accounts Committee (PAC) has already written to  NOC to take action against those involved after it also concluded that embezzlement had taken place in the land deal.

Lawmakers Deepak Karki and Rambir Manandhar have already stated after the field visit  that Rs 400 million has been embezzled in Jhapa and 200 million in Sarlahi.

“We have finalized the report and it will be made public in detail in the full committee,” Thakuri told Republica.

The committee meeting is scheduled for Monday after its chairman Bhisma Raj Angdembe returns from his home district Panchthar.

Meanwhile, Supply Ministry Spokesperson Krishna Devkota said that the ministry has also started investigations through a taskforce with a 10-day deadline.

KATHMANDU, Sept 12: A sub-committee constituted by the Industry, Commerce and Consumer Welfare Committee of the Legislature-Parliament has found that... Read More...

Nepal Media Society to run campaign against corruption
5 years ago