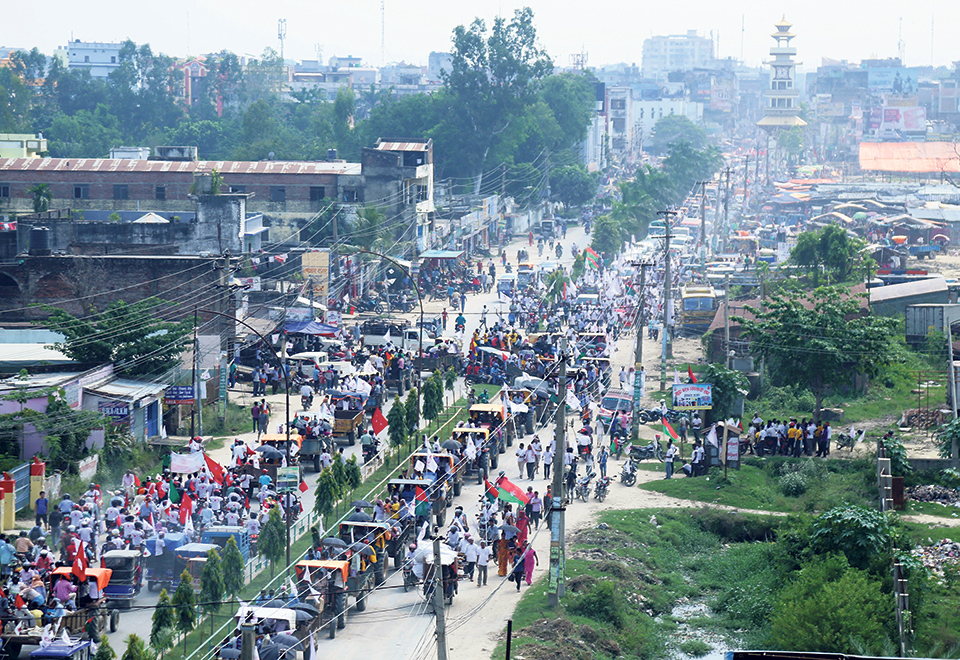 Various political parties with colorful processions heading for the election office in Birgunj on Wednesday to register their candidates for the Province 2 local elections.

KATHMANDU, September 7: Registration of candidates for the third round of civic polls, which will elect local representatives in eight district of Province 2 concluded peacefully Wednesday. The Election Commission (EC), which conducted the first and second phases of local polls in May and July, is holding the third round of the polls on September 18.

Our reporters on the ground said that there were some disputes over candidates. In Siraha, NC district party office turned into a battleground after factions close to President Sher Bahadur Deuba and senior leader Ram Chandra leader clashed over selection of ward candidates. Twelve NC cadres were injured in the clash. Other parties including Rastriya Janata Party Nepal, CPN (Maoist Center) and UML also witnessed some disputes over candidates selection.

EC officials said that they are expecting slightly more candidates compared to the first and second phase of elections due to participation of various regional parties and independent candidates.

The EC has said that the election body has completed logistical and security preparations. The Ministry of Home Affairs has announced public holiday in Province 2 on September 18 based on the recommendation of the election body.

KATHMANDU, Mar 7: The Election Commission has called for candidacy nominations from those aspiring to become the third president of the... Read More...

KATHMANDU, July 20: The Election Commission (EC) has set September 6 as candidacy nominations day for the third round of the... Read More...

KATHMANDU, June 17: As part of conducting the second round  local elections in three of the seven provinces, the Election Commission... Read More...