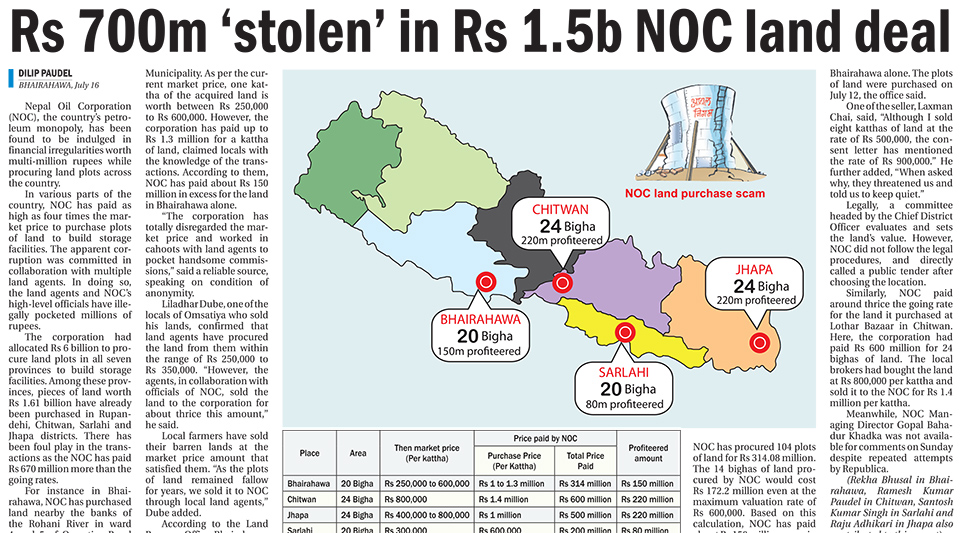 KATHMANDU, Sept 5:While expressing concern over the use of strategic lawsuits against public participation (SLAPP) as a tool to silence media on issues of corruption, the Sydney-based International Federation of Journalists (IFJ) Asia-Pacific has urged Nepal to ensure a mechanism to discourage such false lawsuits aimed at critical voices and investigative journalism.

Issuing a press statement Tuesday, the international journalists' body expressed serious concern over the defamation case filed by  Managing Director of state-owned Nepal Oil Corporation (NOC) Gopal Khadka against Nagarik daily for reporting about corruption.“The strategic lawsuit against public participation (SLAPP) has been a tool to censor and silence media around the world and the IFJ urges Nepal to ensure a mechanism to discourage such false lawsuits aimed at critical voices and investigative journalism,” said the statement.

The IFJ, joining its affiliates the Federation of Nepali Journalists (FNJ) and the Nepal Press Union (NPU) in expressing serious concern over the defamation lawsuit filed against Nagarik daily, said the lawsuit was intended at silencing the daily newspaper.

The IFJ has expressed confidence that the court wouldn't support any move to undermine press freedom and discourage investigative journalism.“The IFJ believes the court will issue an exemplary verdict protecting  press freedom,” the statement further said.

Nagarik daily and its sister publication Republica daily have been publishing a series of investigative stories on corruption involved in the procurement of land by NOC in various parts of the country. A parliamentary probe committee has investigated the issue and concluded that procurement procedures were not followed in the purchase of the lands.

“The FNJ respects Khadka's right to file the case in  court. However, the case seems to be intended to discourage reporting against corruption, create a chilling effect on media, and burden  the media and journalists  with financial difficulties,” the statement quoted General Secretary of the Federation of Nepali Journalists (FNJ) Ramesh Bista as saying.“FNJ is confident that the court's verdict will uphold Nepal's law, international standards of press freedom and principles of investigative journalism.”

General Secretary of Nepal Press Union (NPU) Ajaya Babu Shiwakoti said that NPU is seriously concerned over the filing of a case intended to discourage investigative reporting on corruption.“NPU is always in solidarity with professional journalism and urges one and all not to harass media and journalists for carrying out their professional work,” he said.

Earlier, Khadka had issued a threat to journalist Paudel for his reporting on corruption issues for Nagarik daily.

Coronavirus infection confirmed in 38 people on Wednesday
39 minutes ago