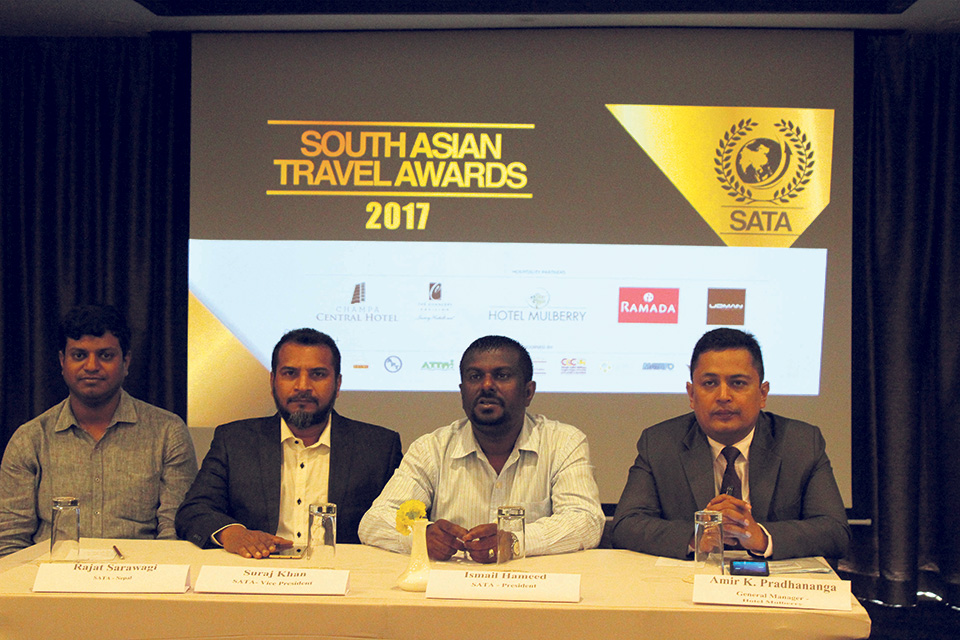 KATHMANDU, Sept 5: Twenty hotels from Nepal have been nominated for South Asia Travel Awards (SATA) competition for their contribution to the promotion of the country’s tourism sector. The nominees include both small and big hotels.

Himalayan Airlines has been nominated for the award in civil aviation category. It has been selected for SATA award based on its services and future prospects.

“The award ceremony is being organized for the second time in South Asia. Around 500 hotels from Sri Lanka, Maldives, India, Nepal, and Bhutan are participating in this award ceremony,” Sarayogi said: “It is good news to have 20 hotels from Nepal in the competition.”

He said that the nominee hotels have been selected through a multi-layered process.
The program will be held on October 27-29 in the village resort based in Addu City, the Maldives.
Sarayogi said that all the nominated hotels from the five countries would have to show their presentations in the Maldives. According to him, the award will be provided on the basis of occupancy, property, and the facilities available. The nominated hotels will be competing for 29 titles under different categories of boutique hotel, city hotel, hotel and spa, business hotel, and luxury hotel.

“The SATA award has been organized in order to encourage and empower the hotels of South Asia,” Sarayogi said.

In the award ceremony, tour operators and trekking guides will also participate as the representatives of Nepali mountaineers. Nepal Tourism Board will also participate in the ceremony.
The evaluation process has been divided into two phases. For the competition, paper presentation based on past, present and upcoming plans of the nominated hotels will be the first indicator of evaluation. Paper presentation has been given sixty percent weightage in the evaluation, along with the hotels’ property details.

Along with this, the hotels’ corporate social responsibility activities will also be evaluated. Environmental factors will also be considered, such as garbage management inside and outside the hotel, environmental campaigns, utilization of local resources, and so on.
Similarly, the panel of judges will also consider services provided by the hotels as per their categorization and the use of their property.

The remaining 40 percent of evaluation marks will come from the public votes that the hotels will receive. Interested people can visit the official website of SATA to vote for their favorite hotel.
Nepal, however, is not represented in the panel of judges as it has only 20 nominations for the award ceremony. As per the organizers, at least 50 nominations are required for a country to have representation in the panel of judges.

KATHMANDU, April 2: Despite a decline since the previous Constituent Assembly (CA), Nepal has made it to top position in... Read More...