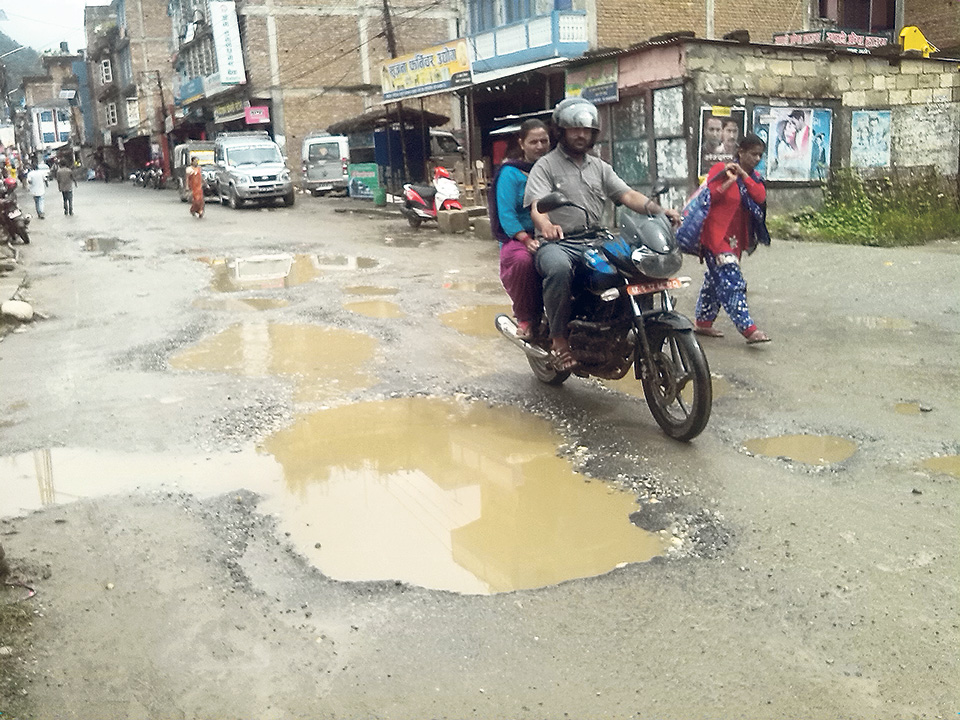 Potholes in middle of a road near Hallan Chowk, Baglung Municipality-2 in this recent picture.

BAGLUNG, August 30: The hasty and poor quality of work done in the name of development has given more troubles than benefits to the locals of Baglung district. A good example of this is the sorry state of many of the roads in Baglung Municipality.

Major roads of the municipality are blacktopped and repaired every year. However, use of substandard construction materials and ineffective management of sewage systems have completely ruined the roads, locals claim. Such repairs and constructions do not last even a year despite spending hefty sum of money.

The road stretch from Shreenagar Tole to Aishwarya Park road has big potholes in multiple places. When it rains, the potholes which are filled with rainwater give the pond-like illusions. Incessant downpours during the monsoon seasons are the worst nightmares for pedestrians and drivers.

With the situation continuously deteriorating, locals are of opinion that lot of efforts and dedications are needed from the concerned authorities in order to resolve these years-old problems. They have especially stressed on the proper management of sewage system.

“Improper and ineffective sewage management is the main culprit behind such sorry state of our roads. When it rains, flood starts from the road,” said Rajendra Acharya, a local. “This is grave problem. The narrow roads of the municipality, coupled with its derelict state, could lead to serious road accidents and even claim people's lives,” he opined.

The municipality's main road, Aishwarya Chowk - Shreenagar Tole, measures 460 meters. It was repaired only last year with 70 percent investment from the municipality's road department and 30 percent investment from the locals. The total investment for the repair works was Rs 3.4 million, where the locals had contributed Rs 1.1 million. But looking at the road a year later, a section of the road that passes through Banapa-2 has potholes that are as big as small ponds, Acharya said.

“When it rains, the floods on the roads sometimes even enter my shop,” complained Junga Bahadur Thapa, a local. “Likewise, vehicles driving along the road also splash water into my shop. This has made the situation unbearable for me,” he added. Vehicle splashing stagnant and dirty water on bystanders and pedestrians has been a big problem, Thapa said.

“Delay in sewage construction in Hallan Chowk by the municipality has contributed to big potholes on many parts of the road,” said Bidesh Kumar Shrestha, secretary of Aishwarya Chowk - Shreenagar Tole Road Repair Consumer Committee.

According to him, floods flow through roads during monsoon, which is one of the reasons why the roads do not last. “No matter how strong the road we construct, it is not possible to withstand high-intensity floods when it flows through the roads. Floods and stagnant waters ruin the roads and we are helpless,” he added.

Engineer Trilochan Giri of Baglung Municipality also acknowledged that improper management of sewage in Baglung Bazaar has contributed to weaker roads. “Firstly, we do not have lab to test whether the construction materials used by the contractor company are of good quality. Floods that flow through the roads during monsoon have created another problem. Likewise, waste deposited by monsoon-induced floods also create big problem for us,” he said.

Surendra Khadka, deputy chief of Baglung Municipality, said they have initiated process to manage drainage system. “The monsoon this year is ending. When another monsoon comes around, we will make sure that the problem is resolved,” he said.

SINDHULI, July 4: Nawaraj Gole of Kamalai Municipality in Sindhuli district does not like to step out of his home these... Read More...