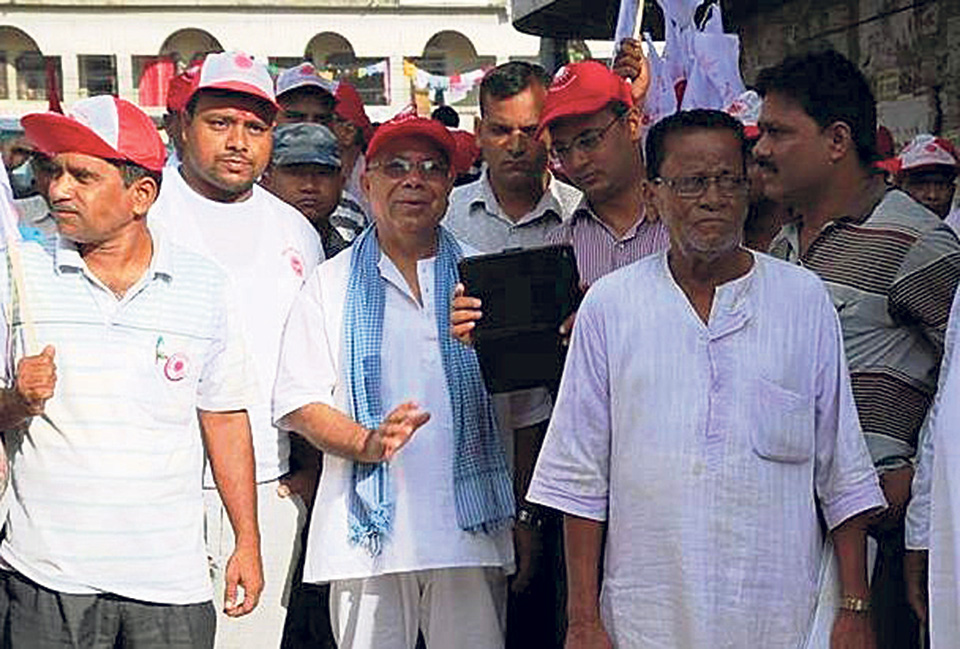 KATHMANDU, August 29: He spent much of the last week distributing aid and relief material in the flood-hit villages of the country's central plains.

On Saturday and Sunday, he was listening to grievances of the people in his home constituencies and neighboring villages of Rautahat and Bara districts.  On Monday, he took part in door-to-door campaigns asking votes for the party's mayoral candidates for Birgunj Metropolitan City and addressed four different rallies.

Needless to say, it has been a busy week for CPN-UML senior leader Madhav Kumar Nepal.
Given other top leaders' dipping popularity in core Madhesi constituencies, the UML has been carefully positioning former prime minister Nepal as the party's key face for poll campaigns in Province 2 which is slated to go to polls on September 18.

On the other hand, the party has so far avoided using some top leaders including party chairman KP Sharma Oli in poll activities in core Madhesi constituencies.

Poll campaigns led by other top leaders have been confined to villages adjacent to the East-West Highway.  UML leaders said there are multiple reasons why the second largest party is positioning Nepal as its key face for poll campaigns in Province 2.

Oli and many others UML leaders continue to remain deeply unpopular in core Madhesi constituencies partly due to their rigid stance on the constitution amendment and partly due to what many consider the "demeaning remarks" they made during the Madhes movement. Oli and many other leaders have been vocal against the revision of the statute right from the beginning.   Nepal, on the other hand, has been taking a milder stance. Unlike Oli, he has always been careful while treading over concerns put forth by Madhesi constituencies.

Nepal is also a well known name in Madhes. He was born and raised in Rautahat, a district in the central terai where his family has lived for generations. Except in the first Constituent Assembly election, he has never lost elections from his constituencies in Madhes.

Madhesi leaders in UML are tempted to invite Nepal for their poll campaigns due to his command in Maithali and Bhojpuri languages. Nepal is also a good orator.  UML Secretary Pradeep Gyawali said that the party has mobilized its entire leadership in the poll campaigns.  "Nepal is more active in the poll campaigns because he is from Province 2. But other top leaders have also been campaigning, albeit quietly," said Gyawali.

"Many senior leaders including the party's acting chairman are currently in Birgunj to finalize the candidate selection process and formulate appropriate poll strategies to make the party the largest force in Province 2." UML chairman Oli is currently in Bangkok for follow-up health checkups.
Gyawali said that a group of senior leaders led by party general secretary Ishwor Pokharel had campaigned in various areas of Province 2.