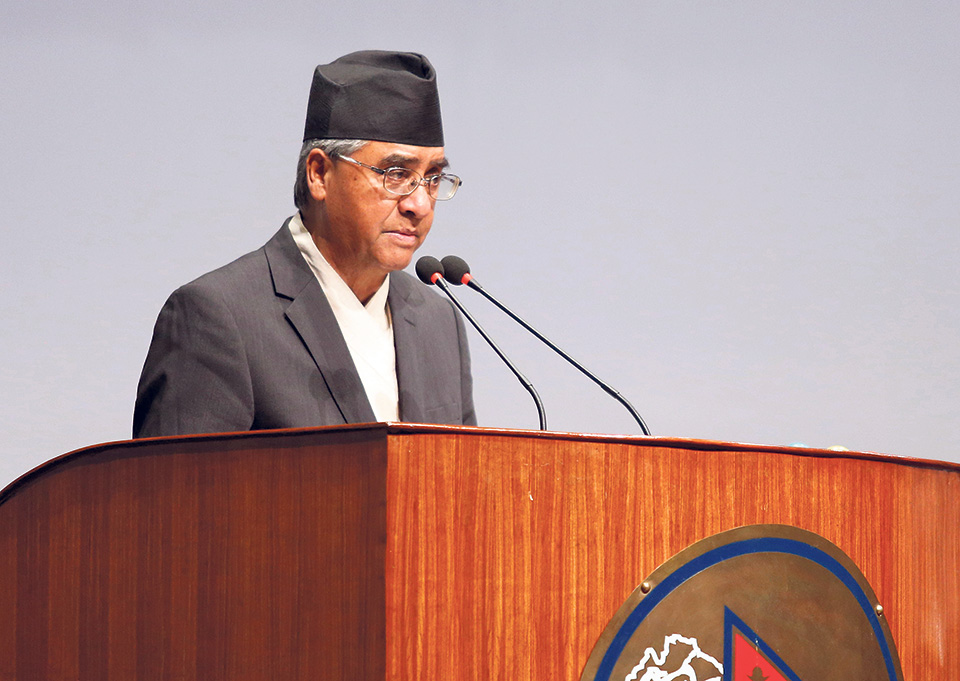 KATHMANDU, August 29: A day after returning from India, Prime Minister Sher Bahadur Deuba has said that the government will not tolerate any interference from any neighbor in the constitution implementation process.

Briefing the parliament about his India visit on Monday, Prime Minister Deuba further claimed that he did nothing wrong by raising the constitution amendment issue at the joint press meet with his Indian counterpart Narendra Modi.

Deuba was criticized by the main opposition CPN-UML and some ruling parties over "unnecessarily raising Nepal's internal matter in India".

Stating that his attention was drawn by media reports and comments from leaders of some political parties, Deuba said that informing the international community about the constitution implementation process was not wrong. “I want to make it clear that the task of constitution-making and making it acceptable to all sides is our internal matter. I haven't reached any agreement on constitution implementation with anyone. And I cannot even think about it,” he reiterated.

He however was quick to add that the task of making the constitution acceptable to all and its implementation were the country's national issues. "And, it isn't unusual to inform the national and international community about our national issues,” he argued. “Our neighbors and the international community, who have been supporting us in strengthning our democracy, peace process and political transition may show interest in these issues and we shouldn't view it otherwise.”

Admitting that he spoke about the government's efforts for mustering greater support for the new constitution, Deuba said that interference from any neighbor in the constitution implementation process is not acceptable. “I want to assure the parliament that interference from neighbors and any other countries is not at all acceptable to us,” said Deuba.

Deuba arrived in Kathmandu on Sunday concluding a five-day state visit to India. He further said that the issue of inundation and floods in the tarai was raised during the bilateral meetings with Indian ministers and officials. The opposition parties had urged Deuba to seriously take up the issue of flooding in the tarai caused by Indian dams along the border.

Meanwhile, the chief whip of the opposition Rastriya Prajatantra Party (RPP), Dilnath Giri came down heavily on the prime minister for giving assurances to India that Nepal would make new attempts to amend the constitution. “It is highly objectionable for the prime minister to make assurances to India that the constitution drafted by the Constituent Assembly would be amended. “This has hurt our sentiments and has made the Nepali people ashamed,” said Giri speaking in the House meeting on Monday.

Three-tier elections a must for statute implementation: Deuba

KATHMANDU, Dec 23: Nepali Congress senior leaders have made an insistence on holding the three-tier elections with the endorsement of... Read More...