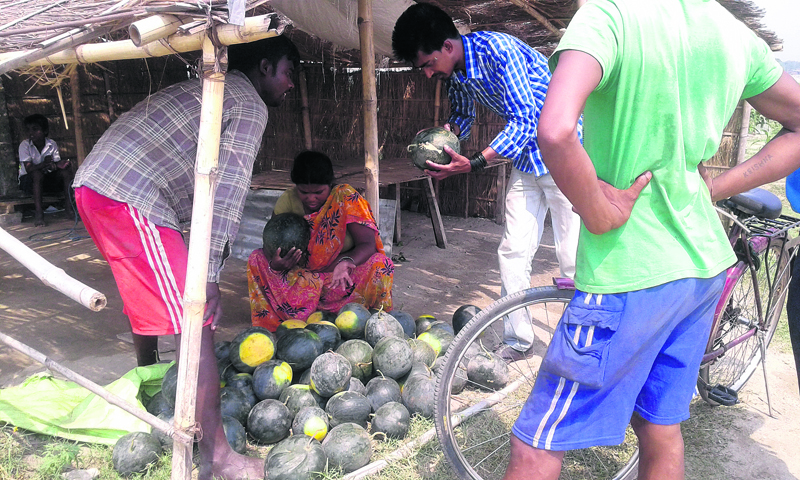 In this picture taken Sunday, a swollen Aduwakhola River threatens a bridge in Birtamod of Jhapa. (Raju Adhikari/Republica)

BIRATNAGAR, JHAPA, ITAHARI, SAPTARI, July 25: Two persons have died in separate drowning incidents in Morang and Jhapa on Sunday. Krishna Khadka, 18, of Tankisinuwari-3, Morang was swept away by the Singhiya River, according to District Police Office, Morang. Kali Bahadur Limbu, 66, of Goldhap-9, Jhapa drowned in a rivulet nearby his home.

In yet another incident, Ekendra Khadka, 36, of Gauradaha-5 was swept away by the Geuriya River. Police have intensified efforts to find his body, according to Hari Prasad Sharma, deputy superintendent of police.

More reports of damage, roadblocks and displacements have been emerging from the region. Rangeli-Urlabari section of the highway has been swept away by floods in the Bakraha River. At least a 10 meter section of the road has been damaged by the floods.
According to Eastern Regional Police Office, Biratnagar, floods in Bakraha River have inundated hundreds of houses in the region. Two dozen houses in Madhumalla-5 have been inundated by floodwaters.

In yet another incident, more than 50 houses have been inundated in Govindapur-8, Morang.

Displaced from the village have erected temporary shelter on the road using tarpaulin. Nepal Police and Armed Police Force (APF) have been helping the affected locals move to safer areas.

In Jhapa, as many as 2,000 houses have been inundated and 200 families have been displaced due to floods in the Mechi River caused by incessant rains since the last couple of days.

Security forces from Nepal Police, Armed Police Force (APC) and Nepal Army have been mobilized to start relief and rescue of locals, according to District Administration Office, Jhapa. Floods in the Kankai, Biring, Ratuwa, Ninda and Mechi Rivers and in other smaller streams have caused damage and losses to houses and properties in the district.
More than 200 families were displaced after floodwaters from the Aduwa River entered homes in Birtamod.

The hand pump of a shallow tube well nearly submerged in floodwaters at a house in Tilathi of Saptari pictured on Sunday. (Jitendra Kumar Jha/Republica)

Meanwhile, more than 12000 houses have been inundated due to floods in various rivers and rivulets in Saptari. As many as 4,000 families have been directly affected by the flooding, according to Nepal Red Cross Society, Saptari. The floods have caused damages to 1,500 houses, Jogendra Bhagat, president of the society.

Security forces have started providing immediate relief to the affected people, according to the Superintendent of Police Bhim Prasad Dhakal. The floods have caused damage and losses throughout the district, he said.

LAOS, July 24: Hundreds of people are missing and an unknown number dead after a dam collapsed in south-east Laos, state... Read More...