Entire village under risk of landslide 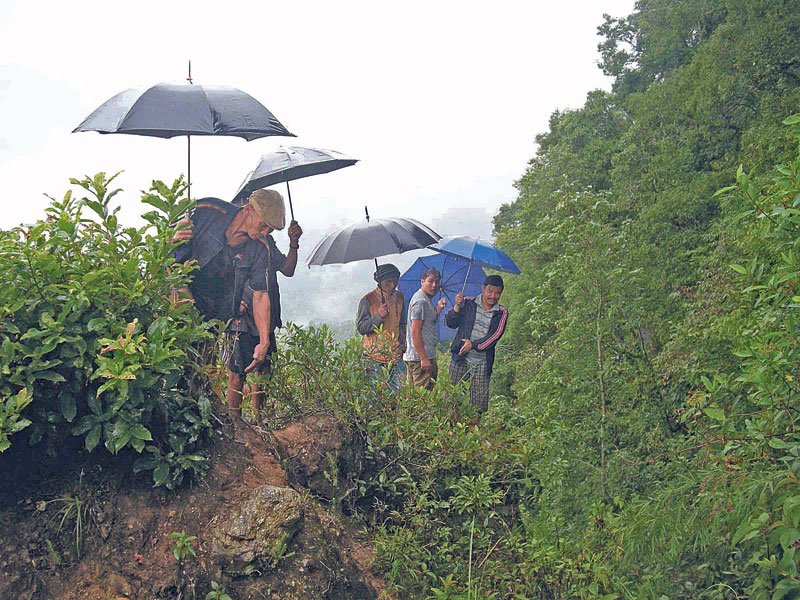 Amid fear of landslides, locals of Damdi village inspecting Hattisude hill in Khotang district in this recent photo. (Daman Rai/Republica)

KHOTANG, July 25: Tanka Bahadur Rai of Damdi village of Khotang district finds it very hard to sleep these days. What has stolen away his peace of mind and sound sleep is the constant fear of landslides which may wash away his house any moment.

"I can sense the danger. This hill may fall upon us any moment. If that happens, we won't remain alive,” he said. “Due to the fear, it is not possible to sleep soundly,” added Tanka, who is a teacher by profession.

Fear of landslides escalates in the village when it rains. And when the rain is consistent, situation worsens.

“Yes, people feel panicked, but there's little we can do about it. Some are considering to leave this place, but it's not easy when you have children and family,” Rai stated.

Over 50 houses, including that of Tanka, in Damdi village of Khotang district are under high risk of landslides. Around 1000 meter above the settlement is the Hattisude bhir (hill that looks like elephant trunk). The hill looks fragile and cracks are visible around.

Seventeen years ago, the same hill was hit by landslides. Every year, it is more or less affected during monsoon. Over the years, their settle has been far more vulnerable to landslides, according to the locals.

According to Raharmani Rai, a local of Damdi village, stones keep falling from the hill. More stones fall down during incessant rain. “This hill gives us tension all the time. When it rains, we don't know whether we would remain alive or die,” Raharmani said.

Many locals have started to spend nights at relatives' houses in another village. They leave home at late in the evening and return early morning. “We are living such a pathetic life. There seems to be no solution in hand,” said Raharmani.

Another local of the village Nara Bahadur Rai was of the opinion that the local authority should do something about it. For the villagers, it is not easy to leave their ancestral land and move away.

“Where shall we escape? How to manage living? So, we are sticking to our ancestral land. We have crops here. It feeds us. But if landslide hits, we are going to die,” he lamented. “We cannot explain how it feels like living under constant fear of death. Yet, we are here like this,” he added.

Not only houses but also a school is under high risk of landslide in the village. Lal Kiran Primary School attended by huge number of children looks equally vulnerable. No sooner than there's thunder in the sky, classes get disturbed as the teachers and children start panicking. But if the fear comes true, there's no safety measures to save lives.

According to an elderly in the village, Dal Bahadur Rai, the hill was torn apart one feet during the great earthquake of 1934. Even then, it posed danger of landslides ever monsoon.

“By now, the hill has developed many cracks in it where water gets collected. Now the crack is not just one feet, but has become four feet long,” he said. Dal Bahadur added that last year's earthquake also affected it.

Locals in mood to abandon the village
Many have already left the village permanently due to the threat of landslides. Some are preparing to follow their footsteps. In the last 2 decades, the village has not seen growth of house or families here. According to Tanka Bahadur Rai, it is indeed wise to leave the village forever as the risk of landslides looms large.

“We don't have only a single problem. Landslides, flood, lack of transportation facility have made our life miserable. Those who could manage it, have already migrated elsewhere. But those who could not are putting their life at risk,” he said. He added that the government should resettle the remaining people as soon as possible.

“It is very hard to say whether the person who has slept well at night would remain alive the next morning or not. This is the situation here,” Tanka further said, appealing to the government to take the right measures before catastrophe strikes.

Locals stated that they are making plan to leave the village in group. If the government gives helping hand, it would be much easier for them, they said.
“It is not easy for us to manage new settlement, though we are planning for that. If the government supports us, all the villagers are ready to shift away from here,” said the Tanka.

Landslide in Chwaseghari buries a village

DOLAKHA, August 4: It was around 11 pm on Friday when Tika Bahadur Khatri, a local teacher in Aplepu of Gaurishankar... Read More...

KERAUJA , July 1: At least 557 shelters of April 25 earthquake victims at Kerauja VDC in Gorkha are at... Read More...