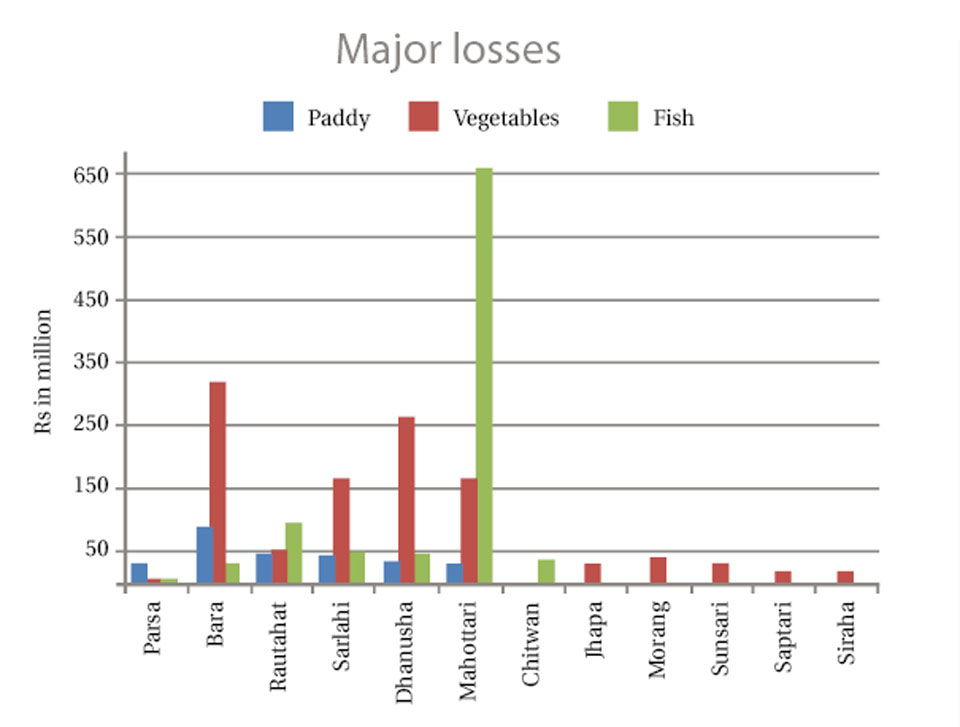 Loss in the central region is worth Rs 2.65 billion, crops worth Rs 655 million is estimated to have been destroyed in the eastern region, according to a report submitted to parliament's Agriculture and Water Resources Committee by the MoAD on Wednesday.

The floods mostly affected crops in 15 districts of central and eastern regions as well as three districts of western region. The report shows that paddy crop suffered major damage, followed by vegetables and fisheries in 29 districts. Paddy crop in 198,698 hectare of land is estimated to have been damaged by the floods. Similarly, vegetables cultivated in 49,136 hectare and fish farms in 3,561 hectare were damaged by the floods, according to the ministry.

Similarly, the floods also destroyed maize planted in 8,352 hectare, lentils in 1,611 hectare, banana in 53 hectare, groundnuts in 15 hectare, oil-bearing crops in 155 hectare and millet in 1.34 hectare.

According to MoAD, farmers, who have planted flood-tolerant, won't have to face much loss.

MoAD officials also told the committee that the ministry was preparing to announce compensation package for farmers who suffered huge loss due to the floods.

DANG, July 30: Small and marginal farmers in Banke have suffered due to crop loss caused by recent floods in... Read More...

DANG, July 29: Small and marginal farmers in Banke have suffered due to crop loss caused by recent floods in... Read More...