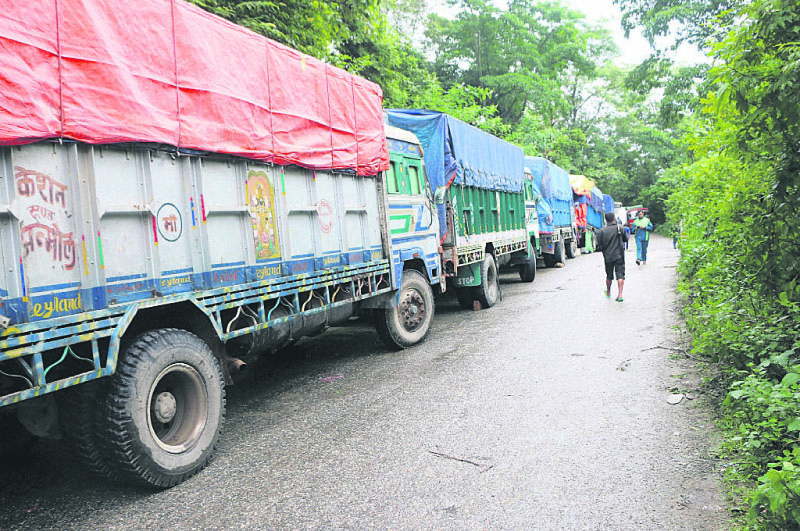 DHANKUTA, August 15: Vegetables farmers and traders in hilly districts of Koshi zone are suffering loss of as much as Rs 10 million on a daily basis as they have not been able to export their vegetables after floods and landslides damaged different sections of Koshi Highway on Saturday.

Landslide caused by heavy rainfall since Sunday morning has washed away road section near Nishane River of Koshi Highway. As the road has not been cleared yet, farmers and traders are suffering huge less.

Farmers and traders of the zone used to export vegetables like cabbage, cauliflower, beans and chilies to markets in several Tarai districts as well as India.

Dhananjay Chapagain, a farmer from Dhankuta Municipality, said that farmers like him will have to face huge loss if the road is not repaired very soon.

Not only vegetables, farmers have also not been able to send milk to the market. Local farmers used to send milk to Biratnagar, Tarahara as well as market places in Terathum. “As local chilling centers have limited capacity, milk worth around Rs 600,000 produced in Terathum and Dhankuta districts is going to waste every day,” Bhim Mahatara, manager of Sagarmatha Milk Cold Storage, told Republica.

According to Sankhuwasabha Chamber of Commerce and Industry, local farmers are facing loss of around Rs 1.5 million every day. “Agro products decay faster. Local farmers will have to face huge loss if the road is not brought into operation at the earliest,” an official of the chamber told Republica.

Koshi Highway is the only road that connects four districts of Koshi zone - Dhankuta, Terathum, Dhankhuta and Bhojpur - with rest of the country.

Farmers of Terathum and Bhojpur districts used to export agro products worth Rs 2.5 million. But export has come to a halt since landslide swept away the road near Nishane River. Agro products like cabbage, potato, ginger and cardamom are produced in large quantity in these districts.

JHAPA, Nov 30: An accident prone section of the east west highway has not been repaired even though it has claimed... Read More...