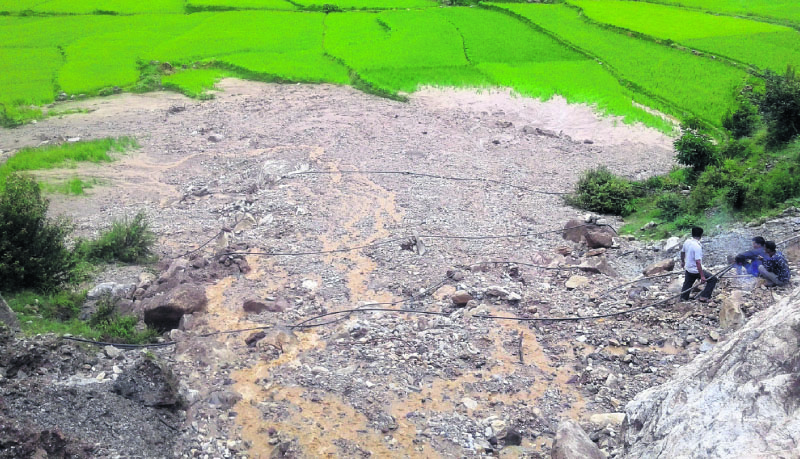 BAJHANG, Aug 13: Landslides have destroyed the paddy fields of dozens of farmers in the district, turning them into riverbanks. With their farms lost, the farmers have become landless.

Bimala Devi Rokaya, a local of Dugri Jiula-3, Jaya Prithivi municipality, is one of the unlucky farmers.

“I lost my farm in the landslide. And I don’t own another piece of land,” she said: “My husband died five years ago and there is no other source of earning.”

Bimala has a family of five, which relied on the crop produced in the land that was lost. The land used to produce paddy enough to sustain them for a year.

There is a river beside the paddy field and a hill above it.

Another local farmer, Mangal Rokaya said that nobody listened to them when they asked the authorities to take expert consultation before proceeding with road construction.
“They carelessly used excavators to cut soil for road. Now with the monsoon, the water level of Sisneri river has risen that has swept away the fields.”

Mangal lost his farm along with the crop, when the river flooded. The farm was his only property.

“I am physically challenged and I don’t have a penny to feed myself. The crop has been destroyed and the farm is lost. I went to all the district authorities asking for help -- from the District Administrative Office to Rural Municipality, Municipality and Division Road Office,” he said: “But nobody comes forward to help me.”  For another local farmer, Nagu Eidi, the story is no different.

“There are only huge stones scattered all over the fields. It is hard to tell whether it is a stone mine or a farm,” Nagu said: “Dozens of farmers have been affected because of this.”
“The contractors handled the roadway cutting project only for money, they never listened to us,” Nagu said.

Executive officer of Prithivi Municipality, Ambar Raj Khatri, said that it was unfortunate that the farmlands were destroyed this year because of increased rainfall. He said: “The municipality is planning to compensate the farmers and manage the problem in coming years.”

The road expansion work had started three years ago.

JAJARKOT, Sept 23: Paddy cultivated in 25 ropani of land in ward no. 4 of Kushe rural municipality in the... Read More...

PHALEBAS (Parbat), July 22: The Waling-Huwas road that links over a dozen VDCs in the district has been obstructed by... Read More...