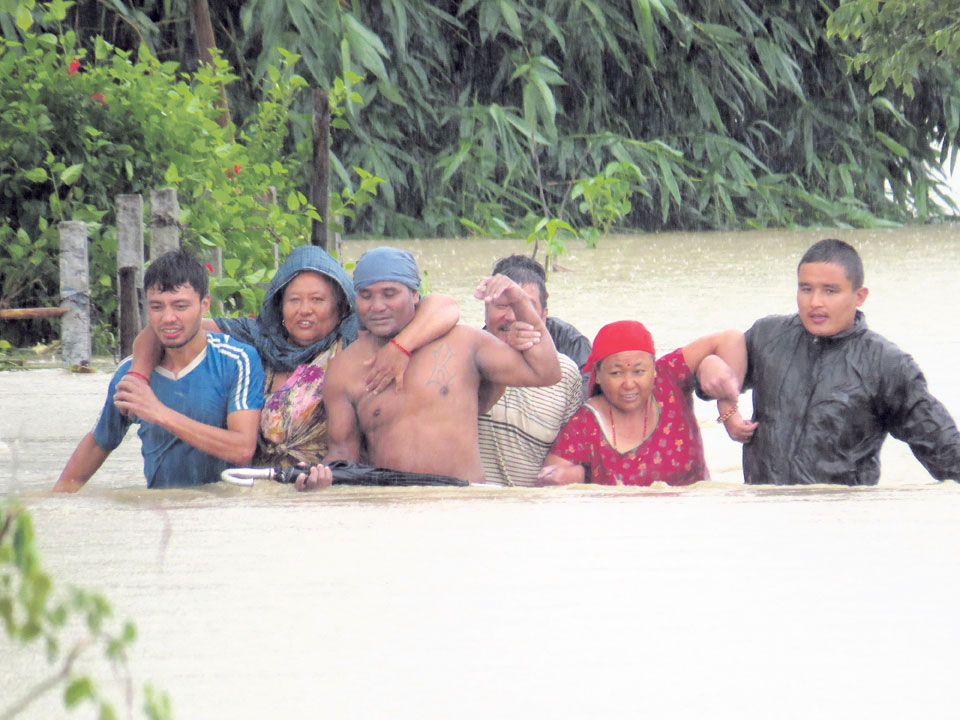 Locals stuck in flood at Baghmara in Ratnanagar of Chitwan being rescued to safety on Sunday.

KATHMANDU, Aug 13: The death toll from floods and landslides triggered by incessant rains for the past three days has risen to 66, according to the Home Ministry. At least 53 people remain missing in various districts, the ministry said in a statement late on Sunday.

Monsoon rains that started since Friday have created mayhem in the eastern, central and western tarai affecting thousands of families. More natural calamities are expected to follow as meteorologists have predicted the rainfall to continue till Tuesday.

According to Home Ministry, nine people in Rautahat, eight in Sunsari; six in Morang; four each in Sindhuli and Jhapa; three each in Dang, Banke, Sarlahi, Makawanpur and Surkhet; two each in Bardiya, Bara, Panchthar, Mahottari, Humla, Baglung, Sarhali and Chitwan; and one each in Dhanusha, Palpa, Ilam and Kapilvastu have been confirmed dead.

Police, however, have said that 76 people have already lost their lives. “The figure could go up as a joint team of security forces have been carrying out search and rescue,” said Nepal Police spokesperson DIG Pushkar Karki. He said that around 31,000 families have been displaced by the floods and landslides.

Meanwhile, our correspondent has reported that seven member of a family in Makwanpur district were killed due to landslides on Sunday. Similarly, six people died in Rauthat district in the central tarai after an ambulance carrying a pregnant woman was caught up in flash floods.

Officials at the Ministry of Home Affairs (MoHA) the actual number of displaced families could be much higher as many villages are still awaiting rescue and evacuations. The search and rescue teams have not been able to reach several affected villages due to bad weather.

Locals of Balirampur of Parsa salvaging their belongings and livestock through flood waters on Sunday.

Though security forces have been using helicopters to supply aid and other essentials including food, blanket and medicine to the affected families, many areas inundated by the floods still remain inaccessible.

“Relief materials have been kept on standby. But the problem is that we are facing difficulties reaching the affected villagers cut off from transportation and communication facilities,” said Ram Krishna Subedi, spokesperson of the Ministry of Home Affairs (MoHA).

“The central command has been monitoring the rescue and relief work being carried out across the country. It has made it much easier to provide timely assistance to the people in need,” said Subedi.

Our reporters on the ground said that the rescue and releif teams have yet to reach many villages in Jhapa, Rautahat, Banke, Sunsari, Saptari, ,Mahottari, Chitwan and Surkhet.