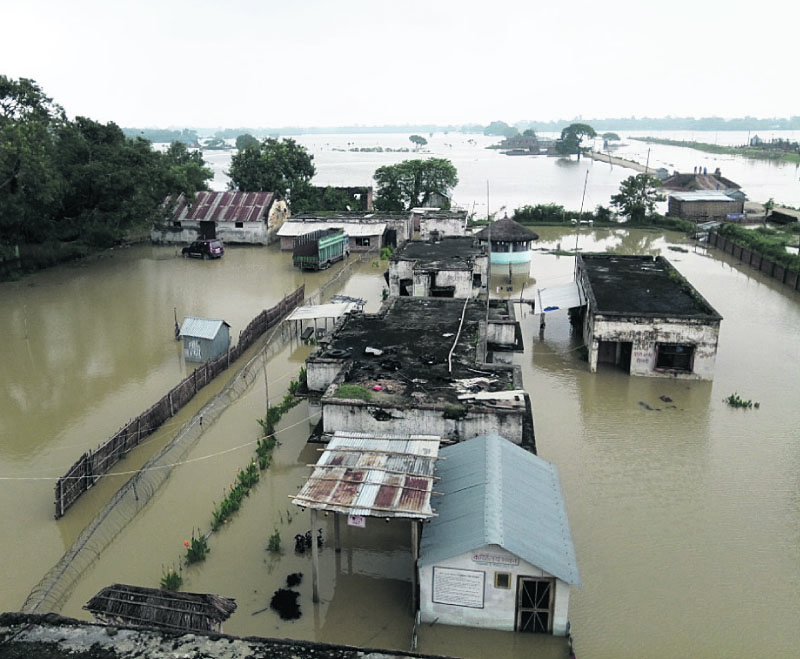 RAJBIRAJ, Aug 11: Floods have wreaked havoc in Saptari district once again, inundating around 1,500 houses and displacing over 350 families. According to the local level officers, the entire southern part of the district has been submerged in water. They say that Kobsain, Banarjhula, Tilathi, Belhi, Hanumnagar, Kankalini and other areas have been severely affected by the floods.

“Around 1,500 houses have been submerged in water and 350 families have been displaced. They have been forced to live under the open sky,” said Rajendra Karna, secretary of Tilathi-Koiladi Rural Municipality. “They have gathered at the Jaldau-Kushaha road section and are living there,” he added.

Among those displaced, over 50 are children, women and elderly people and their situation is worse, he stated.

According to Karna, rescue and relief is challenging because there is no means of transport available.

The floods have reoccurred because of incessant rain on Thursday. Locals lament that flood is not a new thing in Saptari. Every monsoon, it bothers them. However, nothing is done beforehand to prevent the losses, they say.

According to social campaigner Rajesh Kumar of Tilathi, Koiladi - 1, over 400 houses are half submerged in water in his ward. The ward office, health post, police post, schools etc have been submerged in water. Similarly, the main as well as sub roads have also been badly affected by the flood, he informed.

“We can say that the whole village is inundated. Nothing is left. People cannot stay at home. Those who are in the village cannot come out,” Kumar said. “The situation of the elderly, children and cattle even worse,” he added.

A local of Sakarpur, Shivanath Yadav said that around 250 houses have been submerged in water in his village. Flood has basically affected the Dalit community, he said. Similarly, over 50 houses in Launiya have been affected by the flood, locals said.

“The flood has not left anything untouched. However, due to their location and vulnerability, the Dalit community has been the most hard-hit,” Yadav said. “Every time, it is the poor people who get the greatest blow of natural calamities,” he added.
Since yesterday, the flooded areas have been in a mess. People do not have shelter and food. While other communities are still believed to be in better condition, Dalits have become completely homeless.

“Those who had better houses and resources are managing better though they are affected as well. But, the huts of the Dalit people have been washed away,” said Yadav, who is also a social campaigner in his area. He stressed the need for urgent attention to the issue.

“If the administration does not supply food, water, medicines in the flood affected zones, it is going to invite a huge problem. The dirty water is everywhere. It might be hazardous,” he stated.

The flood has not only damaged houses, it has also washed off people’s land at some areas. Similarly, embankments of the river have been damaged.

“We are quite scared,” said Gajendra Mandal of Launiya village. “We don’t know what to do,” he added.

Mandal’s house is just nearby an embankment of Khando river. The embankment is likely to collapse.

According to locals of Rampura village, the water level actually rose in the Kando river from Monday night. As it rained regularly, the river swelled even more. “Four days of incessant rain caused the flood,” said Surya Narayan Khwate, a local. “We are not able to move out from here. We are stuck and isolated. And the government is not sending relief. What to do?” he asked, sounding worried.

Locals say that nobody has come to see them except for few policemen. But, the policemen come and help in person, without any relief packs.

Some locals believe that the recent flood is the biggest in the last few decades. Bechan Kamait, 70, is one to claim so. “I have seen several such floods. But this seems to be far more devastating,” he said. “This must be the biggest flood after 1987,” he added. Meanwhile, CDO of Saptari Krishna Prasad Katuwal stated that relief and compensation to the affected families would be provided soon.

ITAHARI, Oct 7: Eighteen years ago, while migrating from the hills to the tarai, sixty-two-year-old Harka Bahadur Tamang had never... Read More...