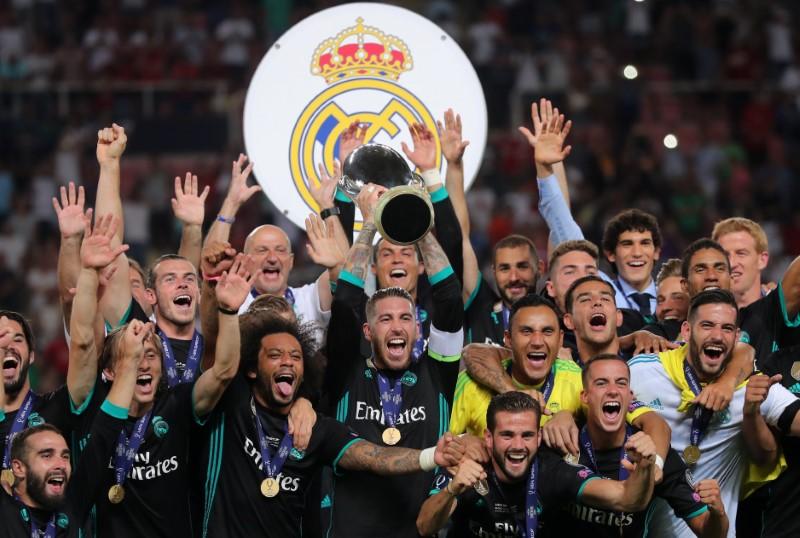 SKOPJE, August 9: Real Madrid beat Manchester United 2-1 on Tuesday to lift the European Super Cup for the fourth time as they became the first team to retain the trophy since AC Milan in 1990.

Brazilian midfielder Casemiro struck the opener with a left-foot strike midway through the first half while Spain midfielder Isco consolidated Real's advantage with a slick finish in the 52nd minute at the National Arena in Skopje, Macedonia.

United's new striker Romelu Lukaku got his first competitive goal for the club to reduce the deficit just past the hour with a simple finish on the rebound in the annual showdown between the European champions and Europa League holders.

That sparked a brief period of pressure from Jose Mourinho's United side and they could have drawn level when Marcus Rashford burst through but he was denied by Keylor Navas' save, ensuring Real won their fifth international trophy under Zinedine Zidane.

"We were superior for almost all of the game and it's important that we've started the season by winning a trophy against a team that did everything they could to win," said Real captain Sergio Ramos.

"Towards the end they had more chances and tried direct play with physical players but we stayed calm in the tense moments and kept the ball. Aside from the final minutes, we had a great game."

Mourinho added: "We were playing a team full of fantastic players but we discussed (contested) the result until almost the end. We gave them a fight but have reasons to leave optimistic and proud."

Hosts Russia eased to a 2-0 win over New Zealand on Saturday in the opening match of the Confederations Cup,... Read More...