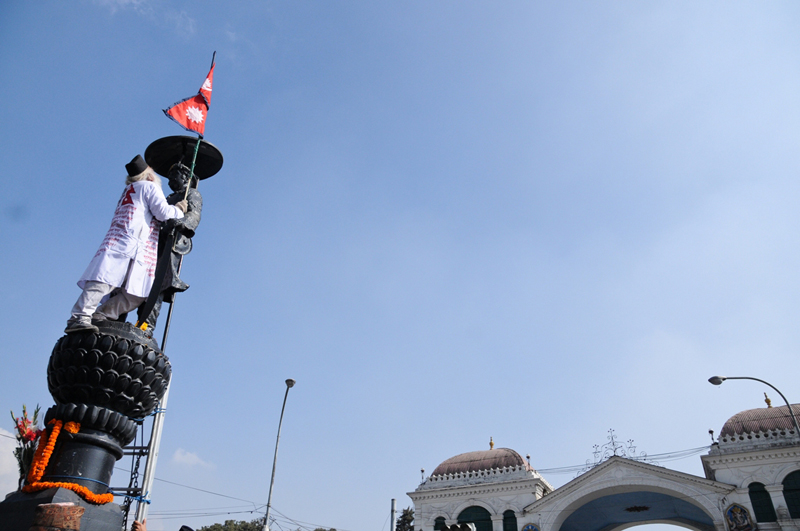 The concept of ‘unification of Nepal’ with Prithvi Narayan Shah as the hero who unified Nepal began to take root after the Shah restoration of 1951.

Ludwig F Stiller in his book The Rise of the House of Gorkha had noted that the Himalayan region, with its deep gorging rivers and steep hills, created natural fortresses which impeded the creation of large empires and states. Indeed, the pattern of state formation in the region was more prone to fragmentation than consolidation and expansion. Thus, in the history of the Himalayan region, there have been few large empires or states. In this context, the creation of the Gorkha Empire in the 18th and 19th centuries was a phenomenal achievement that went against the political process in the region.

In its sheer size and the number of people it ruled over, it was unprecedented. It was larger than Prithvimalla’s (14th century) Khas Malla Empire, Jaya Yaksha Malla’s (1428-1480) Kathmandu state, Mukunda Sena’s (1756-1782) Makwanpur state and Mughal Empire’s Kangra Suba (17th century). This process, whereby the small and obscure state of Gorkha created one of the largest empires in the Himalayan region has often been described as “unification of Nepal”. This article will argue that it was not “unification of Nepal” but rather “expansion” of the Gorkha state.

But what is the point of the discussing this event which took place over 200 years ago? How does it matter, whether it was “unification” or “expansion”? The fact is that Nepal and Nepali society exist to this day. As James W Loewen said: “Whether one deems our present society wondrous or awful or both, history reveals how we arrived at this point”.

Since the 1990’s mobilization based on ethnicity, religion, region and languages have been challenging the notion of both Nepali state and society. Even though the Maoist movement seemed to overshadow ethnic movements, one could argue that the Maoists built on existing ethnic grievances. In present times, ethnic politics and demands have gained new vigor and terms such as “ethnic geography” find a firm place in the political discourse of Nepal. Across the border in Darjeeling, before the present Gorkhaland agitation, there was an alarming trend towards the demand for Development Councils for individual castes and ethnic groups—such as the Tamang Development Council, Lepcha Development council, Sherpa Development community and Damai Development Council.

It seems that Nepali/Gorkha identity is slowly being consumed by these many identities and ethnic conflict is getting pronounced. The question thus arises: Where and when did these social fissures first appear? It is argued here that these conflicts have their origin in the formation of the Gorkha Empire. The debate of whether it was ‘unification’ or ‘expansion’ then becomes important.

The concept of the ‘unification of Nepal’, with Prithvinarayan Shah (1723-1775) as the hero who unified the nation, started after the Shah restoration in 1951. D.R. Regmi, a minister during the period, was the chief architect of this idea and also one of the first “nationalist” historians of Nepal. Though the cult of Prithvinarayan Shah as the primordial hero of Nepal was started in Darjeeling in the 1920’s by Surya Bikram Gyawali in opposition to the Rana regime, it was Regmi who gave it a concrete shape.

Regmi, in his seminal work Modern Nepal insists that Prithvinarayan Shah was driven by the spirit of nationalism in his quest to unite Nepal and keep the British out. In later editions of his book he had somewhat changed his stance on Shah. But the term ‘unification’ stuck both in the historiography of Nepal and in popular imagination. Later historians of Nepal such as Ludwig F Stiller and John Whelpton who followed Regmi have not seriously challenged the term, and have in fact often built on it.

M.C. Regmi and Kumar Pradhan, on the other hand, have both argued against it but have failed to deconstruct the concept. The problem, however, isn’t just with the term but rather with what it denotes; there is an implicit argument that it was a simple coming together of various groups to form the state of Nepal and the Nepali society. Historical facts, however, shows it was anything but that.

The modern nation state of Nepal as a political or geographical entity did not exist before the late 18th century. The term “Nepal” only denoted the valley of Kathmandu. In its various correspondences with the British, the Shah rulers appealed to them to call them the rulers of Gorkha and not Nepal. It was only in 1920s that the term was finally accepted by Kathmandu Darbar. Prithvinarayan Shah’s main motive in his long and arduous campaign against Kathmandu valley was the control of the lucrative trade route to Lhasa, which also included the authority given to the Newari Malla rulers to mint coins of Tibet.

Unfortunately, despite conquering the valley in 1768, the Tibet trade did not provide the benefits Shah and his successors had hoped for. The invasion of Tibet in 1789 by the Gorkha army only resulted in a counter invasion in 1791 of Gorkha dominions by the Chinese army under the mandarin of Kwan-tung (Canton). Thus the only way to generate revenue for the state was via land revenue and taxes. This created a conundrum. To acquire more lands and ensure revenue flow the Gorkha Empire needed a large military-bureaucracy and a large standing army, for which it again needed lands to give away as Jagir to pay for that army. As a result the Gorkha Empire was forced to keep expanding until its defeat in the Anglo-Gorkha war of 1814-16.

The establishment of the Gorkha hegemony in the region meant that its ideas on religion, political structure, land ownership and social structure were now dominant and it was these ideas that they enforced. The land-owning class it created were composed of Bahuns, Khas and another group, Shahs, who began to claim Rajput status with the title “Thakuri”, in which another group of Ranas were also included after 1850.

The Magars who had held important positions in many states in the central Himalayan region, including the Gorkha state, were slowly displaced. Though we hear of a few Magar commanders such as Purna Allay—who lead the Gorkha army against the Namgyal rulers in 1788—their numbers greatly decreased. The Gurungs met a similar fate. A few Gurung commanders and occasional nobles are heard of—such as Kazi Narsingh Gurung who led the tributary mission to Peking in 1795—but their numbers were negligible. All high-ranking positions were monopolized by the Bahun, Khas and the Thakuris,
The Gorkha Empire in its attempt to legitimize its rule began to adopt Brahamical customs and practices. Through an order in early 19th century the Khas were directed to purify their customs according to Brahmanical values, such as wearing the holy thread, and adoption of the title “Chettri/Ksatri”. There were several orders issued to various ethnic groups to purify their customs as per Brahminical ideas. In a Tamrapatra by Girvan Juddha Bir Bikram Shah (1797-1816) in 1802, Gurung, Ghale, Murmi (Tamang) as well as Gharti were told to employ Brahmins as priests. Cow slaughter was banned and strict laws were adopted, especially directed at the Sherpas and other groups termed “Bhotiya’.

The Gorkha Empire decided social relations and customs of various groups, through its edicts known as Thiti Bandej. Any form of contact, especially sexual with the Damais, Kami and Sarki was banned. The Limbus and Khambus suffered the most. Their land-owning system, Kipat, which also constituted their clan structures, was taken over and converted to Jagir lands and given to Bahuns, Khas/Chettri and Thakuris. In addition, Gorkha Empire banned various customs and traditions of the Limbus.

Dissatisfaction with the empire led to uprisings by several groups throughout the Gorkha rule. The Tamang uprising took place in 1791 as the Chinese invaded the region; the Limbus in Illam and Darjeeling hills along with the Lepchas of the region forced the Gorkha army back and surrounded them, along with the Subba of the region, Dinanath Upadhayay, at Vijaypur. Though Upadhayay was able crush to the rebellion, several more uprisings by the Limbus and Khumbus continued over the following decades. A religious movement called the Mastho lead mostly by the Magars, who declared Lakhan Thapa as their god, rose against the Brahmanical religion and the Gorkha Empire, even though they too were suppressed. These were in addition to the mass migration that took place due to the unbearable land tax as demanded by the Gorkha Empire.

The practice of the Gorkha Empire regulating social relations of various groups under its rule finally culminated in the Mulki Ain of 1854. The new edict converted various ethnic groups into castes and laid the foundation and the blueprint of the modern Nepali caste system.

The establishment of the Gorkha state, which later became Nepal, was anything but unification. It was an expansion and conquest of the Gorkha state and a resultant imposition of the ideas of the victorious on the subjugated. D.R. Regmi’s interpretation of history was mostly to justify the Shah dynasty and existing socio-political structure of Nepal. His was an attempt to create “nationalism” in Nepal with what Anthony D. Smith calls a “nationalistic” historiography. However, over the years, the Nepali state and society have been unable to reconcile the ethnic and class conflicts.

This inability can primarily be blamed on the caste system, which was a direct result of the expansion. The Nepali state and society have been unable to remove strong ethnic and linguistic divisions. When economic deprivation is added to the concoction of identity politics and historical memory, ethnic conflicts seem inevitable.

The author is a PhD research scholar at the Center for Historical Studies, Jawaharlal Nehru University, New Delhi

DoA relaxes ban on construction of houses around Gorkha Palace

GORKHA, Nov 14: After 27 year, the Department of Archaeology has relaxed some of the provisions related to the construction... Read More...