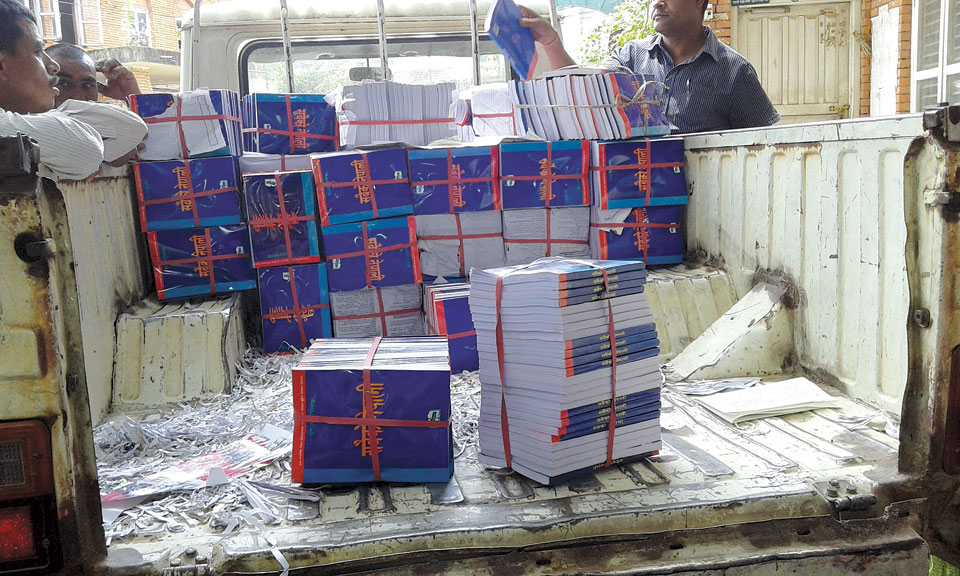 Sajha staffers seized the pickup truck carrying 5,000 copies of Sabaiko Nepali textbooks and handed it over to police in Lalitpur on Sunday.

Sharma's Oxford International Press was renamed Alpine Offset Press and ownership was transferred in the name of one Dinesh Shrestha after Sharma became the general manager of Sajha Prakashan about 31 months ago. Sajha staffers claim that Sharma still is the real owner of Alpine press.

After Republica and Nagarik dailies published reports about the misuse of Sajha logo by Sharma, who printed Sajha books in a private press, the Ministry of Education and parliament's Public Accounts Committee have already launched investigations.

However, a group of Sajha staffers seized the vehicle carrying the textbooks on Sunday morning and handed it over to police. A brief scuffle took place between Sajha staffers supporting and opposing Sharma. Sharma was also present when the seizure took place.

Many of the books seized Sunday were returned by students as schools teach new editions. "Had Sharma not changed the price and edition on the cover, we would not have been able to find out about the mistake he made in his attempt to profiteer," Sajha staffers said.

Meanwhile, eight writers including Maheshwar Neupane and Prof Dr Ramesh Prasad Bhattarai objecting to the illegal printing of Sabaiko Nepali, lodged a joint complaint at Lalitpur Police Office, demanding investigation into the case. They have said that the misuse of Sajha logo is violation of copyright.

Benches fixed at SC, hearing yet to start
16 hours ago