Value of the chain 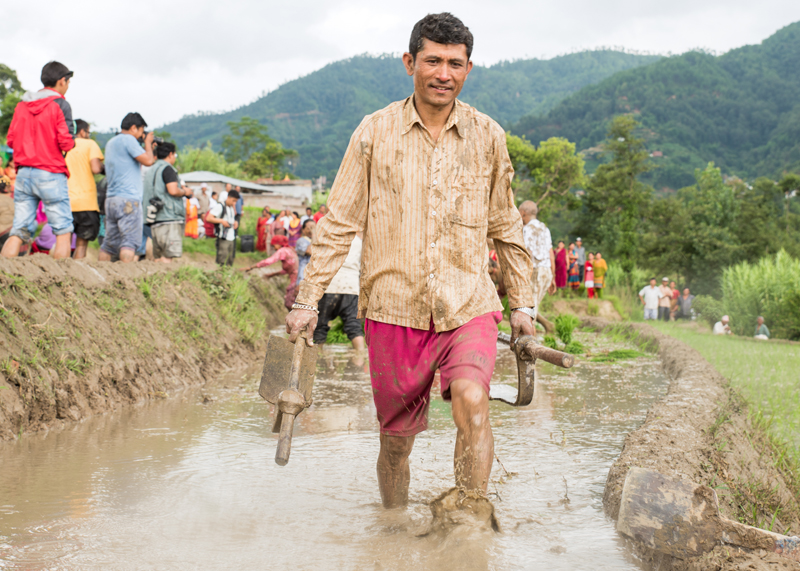 Market’s cutthroat competition made farmers at the bottom of the chain vulnerable. The concept of value chain addressed the weakest link in it.

We all are accustomed to the mantra of Nepal being an agriculture-dominated country, with over 80 percent population dependent on it. While the relentless march of urbanization has already encroached upon fertile farmlands, most farm laborers have left the field to work in areas including foreign employment that offer a better alternative.

Millions of smallholding farmers, who cling to their tiny patch of land, struggle to get by on their meager earnings. No matter how hard they work, most never make enough to lead a decent life. Most are saddled with debt due to diseases or other expenses. They suffer from what experts call “poverty trap,” which keeps them destitute.

An innovative program launched in 2011 in seven mid-western and far western districts has achieved a modicum of success in lifting thousands of people out of poverty. High Value Agriculture Project in Hill and Mountain Areas (HVAP) selected seven high value commodities including apple, ginger, goat, off-season vegetables, timur, turmeric and vegetable seeds and encouraged people of marginalized communities to farm the products responding to market demand and opportunities based on marketing agreements with private agribusiness.

After extensive surveys, the project officials identified thousands of beneficiaries. The project funded by International Fund for Agricultural Development (IFAD) with Ministry of Agriculture Development as an executive agency and SNV Netherlands Development Organization (SNV) and Agro-Enterprise Center (AEC/FNCCI) as implementing partners has a simple goal: to reduce poverty by raising incomes of smallholder farmers by integrating rural poor, especially women and marginalized groups into the high value agriculture value chains.

It started by building linkages and seeking collaboration among stakeholders. The HVAP’s intervention has brought together the thousands of players who were part of the chain but were acting independently.

One good example of how the project helped subsistence farming turn into sustainable business is Hariyo Hira (literally Green Diamond) Agriculture and Herbal Promotion Cooperative. When 15 farmers started growing vegetable in the village of Uttarganga on the outskirts of Birendranagar in Surkhet district in 2009, they faced several challenges including markets, attacks from wild animals and lack of irrigation. Led by Karna Bahadur Budha, who like most members, is a migrant from Jumla district, they began to collect 25 rupees from each member as a group. They ended up creating a fund of 75,000 rupees. Now the cooperative boasts more than 450 members and savings of nearly 6.5 million rupees.

Since 2011, when the HVAP began assisting the cooperative, it has gone on to become one of the most successful farmer groups. That year, it responded to a call for expression of interest by HVAP to work on vegetable value chain. Now the group has a concrete building which serves as a vegetable collection centre, an office and a meeting hall. They found innovative solutions to the water crisis: with co-investment funds from HVAP, they built nine wells, two ponds, and one boring. They also bought 13 motor pumps. The HVAP provided Hariyo Hira a total of 1.9 million rupees as financial assistance. Three years ago, the group sold vegetables worth one million rupees from 38 farmers who were supported by the project. Last season, which ran between October and March, they made more than two million rupees. The members who received support from HVAP also reached 57 from 27.

“Earlier, we used to farm individually. We didn’t understand the market dynamics. Our bargaining power had diminished when we relied on traditional methods such as selling our vegetables carrying it in doko (wicker baskets),” recalled Budha, chairman of the cooperative. “We have realized that if we farm collectively, our bargaining power increases. We also learned that it’s not just enough to produce vegetables, we must keep ourselves updated on information on the market.”

Indeed, the concept of value chain first emerged in the western world as a tool to unpack the complexity of market system. First pioneered by Michael Porter, a professor at Harvard University, in his 1985 book Competitive Advantage: Creating and Sustaining Superior Performance, the concept is defined as an approach where market players perform a series of activities to add value at every step to deliver services to customers.
The process, Porter believed, created a competitive advantage. The value chain process differs from supply chain in that the former seeks to build linkages of trading partners to optimize trade. On the latter, role of each actor in the chain is focused on the value.
Nepali farmers lacked access to new farming technology, market and services. Market’s cutthroat competition made those at the bottom of the chain vulnerable. They lacked the capacity to upgrade their enterprise. That’s where the concept of value chain came into picture. It addressed the weakest link in the chain.

Projects like HVAP identified entry points and addressed critical constraints within chain. It facilitated investment, built capacity of stakeholders. It learned about the motivation of different actors. It helped the most disadvantaged groups climb the value ladder. The entire cycle, from production to distribution, was managed through the application of value chain. When integrated into the market, the subsistence farmers who were struggling to sell their products individually, turned into successful entrepreneurs as they began collective marketing.

To be fair, HVAP’s intervention alone wasn’t enough to bring about the changes. Several factors came into play. In recent years, we have seen an unprecedented expansion of road corridors in rural areas, contributing to an emergence of small markets and settlements (dubbed highway towns). The most important factor perhaps is Nepal’s remittance driven growth and in-country migration. This is good news for farmers like Budha who are at the forefront of the transformation in farming, which has changed from a profession that required hard work, but delivered poor returns to a profit-making enterprise.

The author is a freelance journalist based in Kathmandu.

I see you and imagine you being caressed within my arms Oh, baby, you lent your hands to me with... Read More...

Agitating IOM students stage sixth round of protest against Dean (Photo Feature)
1 minute ago
If you want to seek your property share, go to Baluwatar: MP Agrahari
11 minutes ago

Fugitive arrested from his house in Jumla
48 minutes ago