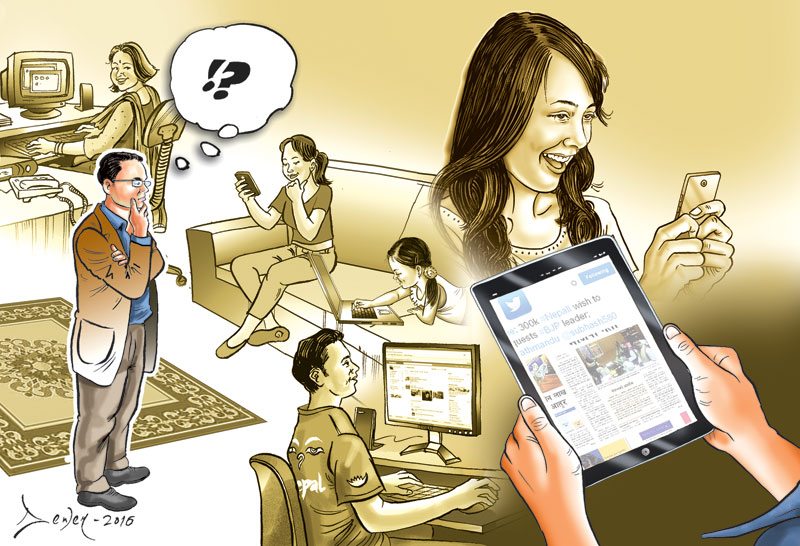 In the early 1990s, International Business Machines Corporations, known as IBM, created a network called NSFNET (National Science Foundation Network) that was amongst the first networks to have used Internet Protocol. Shortly this project would change the face of commerce, culture and technology throughout the globe as it gave network access and interconnectivity.

In the beginning, people thought Internet was a fad. Whilst network connectivity began to expand with near-instant communication through electronic mail, video calls and World Wide Web, its purpose began to stretch everywhere and the world changed. The scope of Internet was not just narrowed to private organizations and government institutions but stretched to instant communication from any user and everywhere.

For instance, two decades back, the price of one phone call from the US or West Europe to our parts of the world was approximately $10 per minute. Now, the price has been virtually slashed to zero through apps such as Whatsapp, Viber, WeChat etc and service is excellent.

Today, the growth of Internet has been an animating force in bringing everyone under an umbrella. Social media, in particular, has played a huge part in making that happen. It is impossible today to survive without social media tools like Facebook, Twitter, Snapchat, Instagram, and Baidu to name a few. It allows real time information sharing, increases news cycle speed, promotes worldwide connectivity, and notably, defeats the imagination of human beings.

What we think impossible today becomes reality in couple of years’ time. Take YouTube sensation PSY, who recorded almost three billion views. The singer otherwise would have been lost in the smog had it not been for social media.

Today, imagining life without social media seems weird. Though they spawn massive benefits, there is also a deflating reminder of how it has subdued our lives. The big question is, is excessive use of social media taking us to the right direction? Or has it sabotaged our ‘social’ life?

A study led by Nottingham Trent University concluded that on an average people check their mobiles 85 times a day. People today are so engrossed with digital world that they care little about their social life. With the growth of more and more innovative social media platforms in near future, it’s likely that human beings will be robotic, busy in their tasks without any concern for their social life.

Excessive indulgence with social media not only deepens the feeling of inadequacy and anxiety, but it also opens door to the dark side of cyber bullying. Posting bitter comments and vulgar images, parading false rumors, leaking photos online are some of the evil sides. Many have been the unfortunate recipients. It takes years to heal the psychological stress. Those with low fortitude even consider suicide.

According to a study, one out of ten youths think about committing suicide because of online harassment. Nepali actress Jessica Khadka committed suicide after her private videos was leaked online in 2012. Another popular actress, whose dignity was mowed over when her boyfriend allegedly made their intimate video public, was almost pushed to that situation. Thanks to her fortitude, she overcame her psychological stress and is back to her profession. But not everyone can deal with loss of privacy like her.

The widespread popularity of social media has drawn the attention of criminals. According to 2013 Pew Research, 81 percent of interned-based crime comprises the use of social networking sites. In Nepal, Metropolitan Crime Division has recorded 560 cases of cybercrime in the first six months of the current fiscal year. Most of them consist of hacking via phishing and pharming schemes, profile cloning and identity theft.

For instance, police arrested Rahul Balmiki for hacking Facebook and Instagram accounts of more than 40 girls and blackmailing them with the intention of posting obscene images. In 2017, a literate Nepali woman was rescued from the clutches of her alleged lover from India. After developing virtual relationship, the guy had promised her good job in Maharashtra only to be realized that the job involved trading human flesh for money.

Meanwhile, pornographic consumption and sexting amongst the youth have   been increasing at an alarming rate as pornography runs deep in social media. Child Workers in Nepal Concerned Center (CWIN Nepal) estimates that 79 percent of the youth are exposed to pornography. Needless to say, youths are in danger of sexual predators and pedophiles with the mounting use of social networking sites.

Overuse of social media also leads to health hazards. Using smartphones in the dim light can jeopardize vision. Transient Smartphone Blindness could be a common problem for this generation in the next few decades. Likewise, carpal tunnel syndrome, sleep deprivation, stress and depression are some of the relevant effects.

It is important to understand that social media is both a boon and a bane. We need to limit its use only for good purpose. It may be difficult but not impossible to choose only good uses.   For starters, individuals should begin weaving genuine relations with friends and families rather than investing time with their ‘mobile friends.’

Users should be careful while voicing their opinion on social networking sites. Those who are engaged in leaking sensitive information, fostering vulgarity and committing cyber crime must be not be condoned. The government must clip the wings of those engaged in such dreadful activities by enforcing Electronic Transaction Act (2008).

One can save oneself from the pitfalls of social media by limiting its use. Since most of the direct victims are youths, parents must intervene if necessary. According to a research conducted by Auburn University, the number of parents who became tech savvy increased by 30 percent. They wanted to monitor if their children were involved in any trouble in the social sites. The number of parents limiting the use of networking sites to their children at their young age had also increased correspondingly.

Social media has ushered in a new dawn in human communication channels. But we should not allow it to fail us in prioritizing things in life. I think of an interesting picture of Mark Zuckerberg peacefully reading a book. The caption reads: “cigarette producers do not smoke.”

The author, alumni of Henan University of Technology, China, is currently  an MBA scholar at Asian Institute of Technology (AIT), Thailand (ajaya10adhikari@gmail.com).

Indulgence of the best kind

Calling all chocoholics! From cakes and cookies to choco-coated fruits, these simple-to-prepare yet fabulous chocolate desserts are just what you... Read More...

Harmful 'vermillion powder' added in 'Chatpate' to give color