Local bodies in a mess for lack of infrastructure 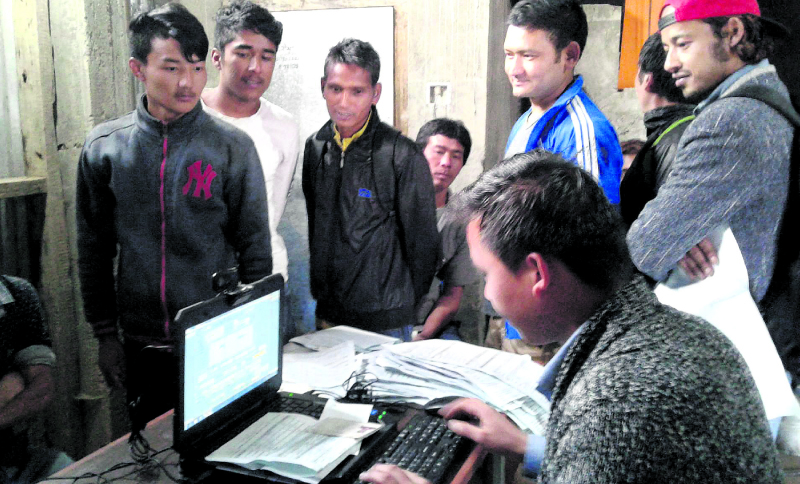 ILAM, Aug 4: Much to the delight of the people, the government recently conducted local level elections in two phases in six out of seven provinces of the country. While Province 2 is yet to witness election, people elsewhere have already got their chosen representatives. But the office bearers in Ilam are quite tensed. They are facing enough hassles both due to the lack of polices and infrastructures. This has greatly affected their performance, they lament.

“We don’t have separate building or rooms. We are working at a rented room. That’s very small,” said Dik Prasad Dahal, executive officer of Kolbung Rural Municipality. “All the staff and officers sit at one place and it is really very difficult to work. There isn’t a separate meeting hall,” he added.

The municipality office also lacks the required number of staff. There is no internet and email service, computers, vehicles and other necessary stuffs in the office either.

As the local bodies have not been able to provide due service, people have been forced to visit the central bodies as before. It is not just the local bodies of the remote villages but the towns are also facing the same hassles. There are 10 local bodies in the district.

“The local bodies are in a mess. We do not know when we are going to be able to bring it to the right shape and form,” Dahal said. “We have piles of plans and projects, but without proper functioning of the office, we can’t get good results,” he added.

According to Dahal, some other staff such as engineers and peons are yet to join the office. When they start coming to the office regularly, the space problem is going to be even severe.

There are six wards in Rong Rural Municipality, which have been looked after by four secretaries. The secretaries say that there is a huge problem of transportation and communication in the villages due to their remoteness.

Sandakpur Rural Municipality does not have its own building. According to Uday Rai, the municipality chief, a rented room at Deurali market is being used for the office. “The room is very small. We all get squeezed in and do our respective work. In such a condition, how can we perform well?” laments Rai.

According to Rai, there is not enough space to keep furniture inside the room. In lack enough tables, computers have not been accommodated. “Everything is in a mess due to the lack of space. We don’t know where to keep computers. Similarly, there is no power supply here. That is another problem,” he said.

Rai further stated that the rural municipalities and municipalities do not have enough number of staff either. “When there is no sufficient number of staff, how can we give satisfactory service?” he questioned. He added that he has come to a conclusion that ‘nothing can be done’ unless minimum infrastructures are set up.

Maijogmai and Mangsebug rural municipalities have no better story to tell. According to Jeet Bahadur Rai, chief of Maijogmai Rural Municipality, all the local bodies should first ensure necessary infrastructures and then only start delivering services.

“Otherwise, there is risk of losing important documents. First, we need proper building and enough rooms,” he said. “Right now, we are managing our work from a tiny room. We are thinking what could be done about it,” he added.

The government had held local level elections after two decades. Its significance was much more than the past elections because it was the first local level election after the country adopted federal structure. In the different set-up, it was more challenging to hold elections. However, elections have already been held in six out of seven provinces. In Province 2, the election is scheduled for September 18.

“The local bodies can generate income from local resources and help themselves. However, it takes time,” he said. “We need due support from the center to bring the offices to shape and form first,” he added.