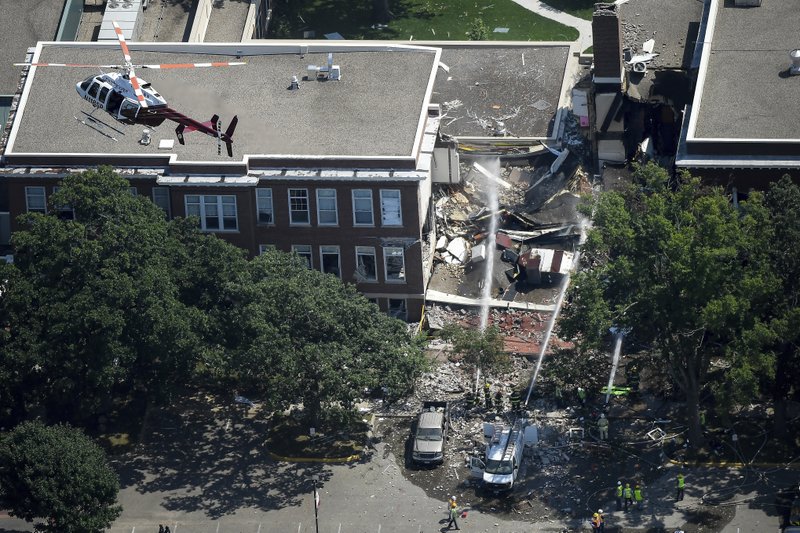 MINNEAPOLIS, August 3: An explosion at a school in Minneapolis killed two people, injured dozens of others and reduced part of a building to rubble, fire officials said.

City Fire Chief John Fruetel said the body of the second person killed in the blast was recovered around 8 p.m. local time on Wednesday at the Minnehaha Academy, a private Christian school that serves students from pre-kindergarten through 12th grades. Fruetel said the medical examiner’s office was working to notify relatives.

The blast occurred in a utility area as students were playing soccer and basketball at school, according to fire and school officials.

Contractors were working on one of the campus’ buildings at the time of the blast, which investigators believe was caused by a natural gas explosion, said Assistant Minneapolis Fire Chief Bryan Tyner.

The explosion killed Ruth Berg, a receptionist for 17 years at the school who “welcomed everyone with a smile,” the school said in a statement.

John Carlson, a part-time janitor known for giving Dilly Bars to students, was reported missing. The 81-year-old attended the school as a child, sent his own children there, and was like a grandfather figure to students, school officials said.

At a news conference Wednesday night, Fruetel did not specify whether Carlson’s body was the one located. He added that crews would return Thursday morning to continue going through the debris.

Four people remained hospitalized late Wednesday, including one in critical condition, at Hennepin County Medical Center in Minneapolis, according to the hospital. Their names haven’t been released.

Aerial video footage of the school’s campus showed part of a building was ripped apart, with wood splintered and bricks scattered about. Windows in other areas were blown out and shattered. Three people were rescued from the building’s roof shortly after the explosion and fire, Tyner said.

Paul Meskan, who lives across the street, said he was pulling weeds when the blast happened, and he quickly ran over to the school. Meskan said he and other people who rushed to help found a man pinned under the rubble.

“We just started digging,” Meskan said. He said that after police and firefighters arrived, “we kept digging, and gas, gas was going. Fire was going. And it’s like, ‘we’re not going back until we get this guy out of here.’ And we got him out, and they got him on a stretcher.”

The Star Tribune reported that city records show Master Mechanical Inc. was issued a permit on June 7 for “gas piping and hooking up meter” at the school’s address.

Master Mechanical has twice been cited for workplace violations in recent years, according to the newspaper. Jenny O’Brien, a spokeswoman for the Minnesota Occupational Safety and Health Administration, said in 2010 there was a violation related to protecting an employee from falling. In 2014, the company had paperwork violations.

At the time of Wednesday’s blast, as many as 10 students were playing basketball inside a gym at Minnehaha Academy but weren’t near the explosion, said Sara Jacobson, the school’s executive director of institutional advancement. Jacobson also was in the building during the explosion.

“There was a very loud explosion, and ceiling tiles and windows and materials rained down on our heads,” she said. “And then soon as it was over, we made our way down a dark hallway to the exit as quickly as we could.”

WCCO-TV reported that hundreds of people gathered Wednesday evening for a prayer vigil about a mile from the school.