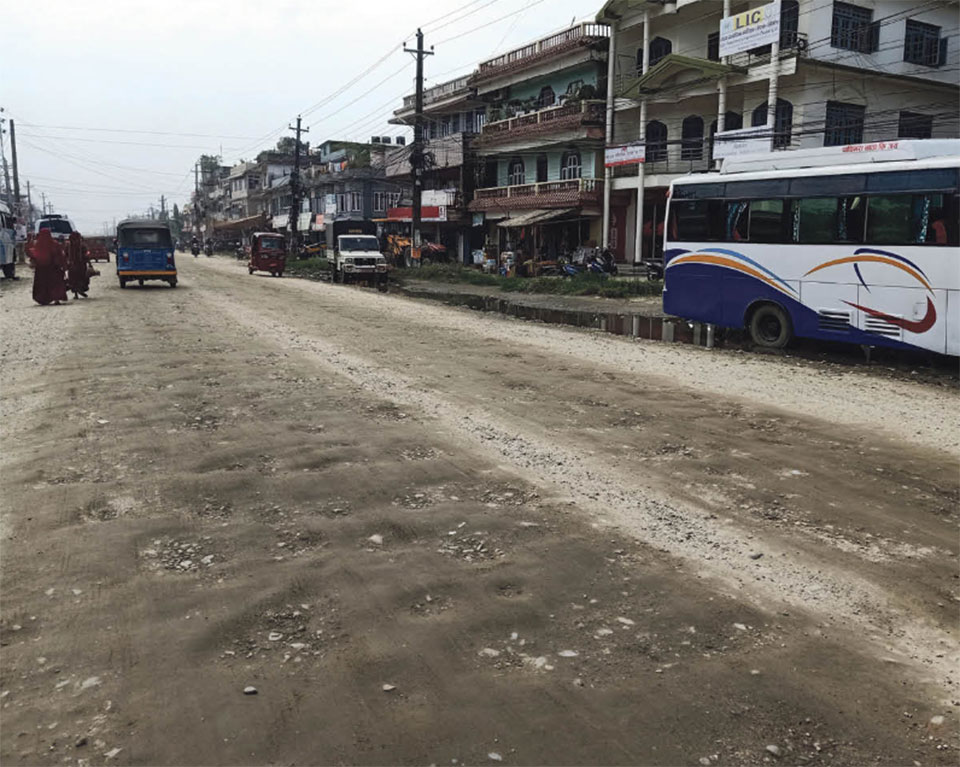 A section of the Birtamod–Bhadrapur four-lane road is seen in this recent picture. Photo: Yuvaraj Bibash/Republica

DAMAK, Nov 14: The deadline for completing the construction of the much awaited Birtamod–Bhadrapur road is just two months away. However, so far around 25 percent of the project has been completed.

The road that heads towards Bhadrapur from Birtamod has been in a mess posing serious inconvenience to the public. A woman lost her life to an unsealed drainage near the road after drowning into it. The incident outraged locals and they have demanded timely completion of the project.

Sumitra Rai, 67, of Birtamod – 10 had fallen into the drainage on 26 August. Outraged locals took to the streets and planted paddy on the road as a symbolic protest.

FNCCI, Birtamod which led the protest had urged authorities concerned to address the problem. However, the protests do not seem have made any impression on the authorities.

Santosh Agrawal, one of the locals in the forefront during the demonstration, said the road is the biggest headache for the people. Neither can they do away with the road, nor can they take away their houses, he said.

"Our houses are here and we cannot uproot and take them elsewhere. On the other hand we have to deal with a road that is in such a poor shape. What is more pathetic here is that the concerned authorities are not taking any measures to expedite the completion of the project," he fumed.

"Even though the deadline is at the doorstep, we don't see any kind of rush around here. Concerned authorities or the contractor have not shown willingness to complete it. We are fed up," he added.

Even before the drowning of the women into the drainage, there have been several tragic cases. Locals state that the government must take responsibility of all the deceased, injured and their families as they 'are falling victims to government's apathy towards' public projects'.

"If I get injured because of the extremely dangerous condition of the road, shouldn't the government be paying my medical expenses? The authorities are literally injuring and killing people by not completing the road project," Agrawal said.

Business fraternity in the main market of Birtamod is quite upset too. Due to the muddy road, few people get out for shopping. When rain stops, dust covers the town.

According to another local of Birtamod Ganesh Pokharel, open drainages on either side of the road are the biggest safety threats to the people. Apart from that concrete slab left haphazardly on the side of the road has led to many accidents.

"The project was launched some 14 months ago. But work on it has never been regular," Pokharel said. "With the deadline just a few weeks away, you can see there has been no commotion around here. For them the deadline is clearly a joke and they don't care about it," he added.

The road project had kicked off on September last year. Initially, contractor seemed to have taken the work seriously, according to locals. However, with time the pace of the work slowed down.

"Before they started this road project, we had a very good environment here. Businesses were going on pretty well. But this road project has ruined it all. This dilapidated road has taken a serious toll on our economy and well being," Agrawal said.

Raju Neupane, president of FNCCI, Birtamod urged the government to understand the problem of the business circle. He argued that the government should compensate business for the loss they are incurring because of the road.

"There is no way for the customers to come to the market for shopping. With such a bad road, nobody wants to tread on it. This has seriously affected the business community. Who is going to look after their problem? It's injustice," he said. Neupane added that the local and provincial government must take the matter seriously and do something about it. "Or else people would have to find alternatives to make a living instead of doing business here."

Division Road Office, Damak, informed that Rs 270 million was released to construct a four kilometer long four lane road from Birtamod to Bhadrapur. Chief at the division office, Shyam Kumar Yadav blamed the contractors for the sluggish pace of work.

He informed Republica that the division office had terminated the first contractor of the road because it was not working satisfactorily and had appointed a new one in the hope that it would accelerate the project. "The earlier contractor was working very sluggishly and the project was delayed. I have directed the new contractor to speed up the project but it seems that the directives are not being followed," he added.

36 road sections are being impacted due to electric poles erected in the middle of the roads ... Read More...

ROLPA, Nov 16: Road construction has been one of the major development agenda during the past decade in Rolpa, like... Read More...