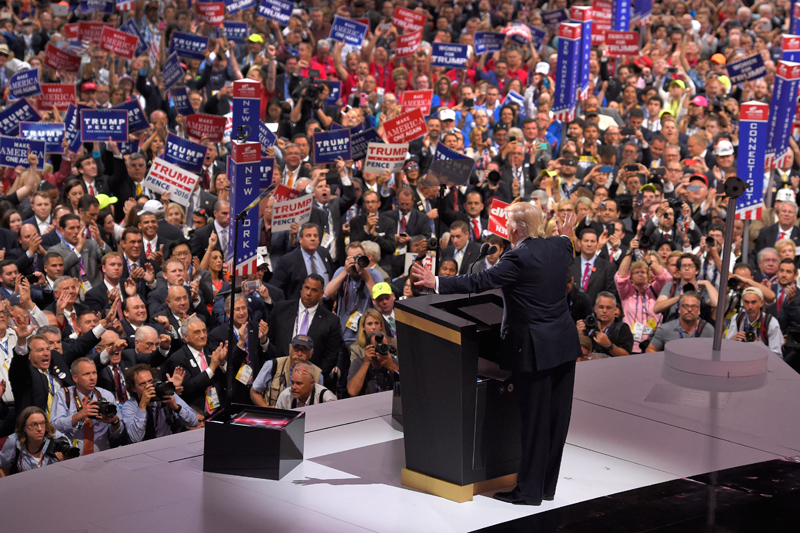 BEIJING, July 22: Donald Trump accused China of stealing copyrights and unfairly manipulating its currency as he accepted the Republican Party's presidential nomination, charges likely to fuel anger in a country already upset at criticisms of Beijing in the party's new policy platform.

Trump — a frequent critic of Chinese trade policies — was being anointed as the party's candidate in November's presidential election, and used his acceptance speech at the convention in Cleveland to pledge that he would stop China's "outrageous theft of intellectual property, along with their illegal product dumping, and their devastating currency manipulation."

His comments are likely to provoke China, which has already lashed out at the Republican Party over its criticisms of Beijing, accusing it of levelling groundless accusations and meddling in China's internal affairs.

"Any party in the United States should view China's development objectively and reasonably, and should correctly understand issues related to China-U.S. ties," Foreign Ministry spokesman Lu Kang was quoted as saying by the official China Daily newspaper.

"We hope these parties will stop groundlessly accusing China and interfering in China's domestic affairs, and that they will do more to promote trust and cooperation between China and the U.S.," Lu said.

Promoting stable U.S.-China relations is in the interests of both countries, the Asia-Pacific region and the world in general, Lu said. "It is the right direction that both countries should stick to."

The Republican criticisms of China are contained within its policy platform adopted at this week's Republican National Convention in Cleveland, Ohio. It refers to China's territorial claims in the South China Sea as "preposterous" and says ethnic minorities face "cultural genocide."

The platform also addresses trade issues, saying China cannot be allowed to continue currency manipulation, and that a Republican president will "stand ready to implement countervailing duties" against countries that trade unfairly.

During the campaign, Trump's comments about China have focused on the loss of American jobs and China's alleged cheating at global trade. Beijing has denounced Trump's threats of economic retaliation, but many Chinese observers have seen a silver lining in his focus on economic issues instead of human rights and political freedoms.

At times, Trump has even given back-handed compliments to Beijing's leaders as being smarter than Washington's.

Trump has also proposed a 45 percent tariff on Chinese imports into the U.S — although many experts question whether the value of China's currency, which appreciated significantly after 2010, is now a driving factor in the trade deficit which hit a record $370 billion last year.

While Trump's outsized personality has won him some Chinese fans, public response to his speech and the Republican platform appeared largely negative.

The sections of the platform concerning China are "full of enmity," retired military officer Lu Kaiqing wrote on the popular Weibo microblogging platform. "Regardless of whether Trump or Hillary (Clinton) is elected, China-U.S. relations are going to face an adjustment."

Writing on his microblog, media worker Lin Jianyang said both candidates regarded China as an opponent who they wished to suppress but had no choice but to cooperate with.

However, while Clinton has considerable experience and will be "a bit more sensible," a win by Trump would "bring the world even greater uncertainty," Lin wrote.